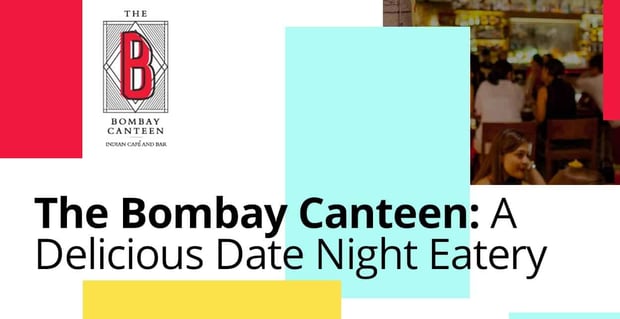 The Short Version: The Bombay Canteen is a popular restaurant in Mumbai, Maharashtra, India, where daters can sample innovative small plates and cocktails. The eatery focuses on contemporary Indian cuisine from across the region and takes couples in Mumbai out of their culinary comfort zones. Diners can opt for the Bombay Experience Menu and have a chef create an assortment of small, regional dishes to share. The Bombay Canteen team aims to elevate dining standards in Mumbai to the caliber expected in the world’s largest cities.

One day after work, a single woman decided to try out The Bombay Canteen, one of the most popular restaurants in Mumbai, India. Since she was alone, she opted to enjoy a drink at the bar rather than sit in the dining room.

A single man came into the restaurant with friends and sat near the woman at the bar. The establishment’s friendly staff and inviting atmosphere made him comfortable enough to strike up a conversation with her.

The two hit it off immediately and, soon after, they started dating. A year later, the couple got married — all thanks to a chance meeting at The Bombay Canteen.

But their meeting was not entirely random. Yash Bhanage, Founder and COO of The Bombay Canteen, suggests that the restaurant’s ambiance and approachable environment encourages diners to connect — even if they’re strangers when they sit down.

The Bombay Canteen is a popular dining spot for daters in Mumbai, India.

“We’ve heard of several couples who have met at our restaurant. Other couples have gotten engaged here. It’s so important to us to be part of these life stories,” Yash told us.

Yash and Founding Partner Sameer Seth created a culinary experience that’s perfect for daters. The restaurant is designed to mimic an old Indian bungalow, with secluded, warm corners where couples can have privacy.

“We’ve worked hard with the service and experience teams. Hospitality isn’t usually as casual and fun in India as it is in Western countries, and we wanted to change that here,” said Yash.

That means servers have engaging conversations with guests and know when to stand back and let them enjoy their date night.

Elevating Its Service and Hospitality in India

Yash and Sameer opened The Bombay Canteen in 2014 after working in the hospitality industry in Singapore and New York City. They decided that India was ready for the type of high-caliber dining establishment common in those countries.

“One thing we noticed in the restaurants where we worked was they were thinking about the cuisine, ingredients, and hospitality,” Yash said.

Though The Bombay Canteen serves New Indian Cuisine and focuses on creating memorable dining experiences, it is still casual. Diners don’t have to dress formally or worry about which piece of cutlery to use.

Daters can enjoy an energetic but relaxing atmosphere at The Bombay Canteen.

That attitude attracts a diverse group of diners. The Bombay Canteen is in an office park, so many local workers stop in for lunch. In the evening, people drop in to have dinner with family and friends.

“We don’t have just one ideal client. We see different pockets at different times,” Yash said.

The restaurant is popular with Mumbai locals and international travelers alike. It has made the Condé Nast Traveler’s list of Where to Eat in the World, earning a rave review from Chef Alice Waters:

“Here you can explore a refined selection of regional Indian flavors given a cosmopolitan Bombay polish, traverse the subcontinent in one meal with dishes like Keralan-style duck curry, Sikkimese shrimp and fish momos, and pork seekh kebab with winter green garlic chutney and kohlrabi-turnip slaw,” she wrote.

Mumbai has many high-end eateries, but few serve Indian food. They mostly focus on cuisine from other countries. The Bombay Canteen concentrates on modern Indian cuisine that could be found at any upscale international eatery.

The team decided that its concept would be a fresh, modern take on well-known dishes.

“We wanted to create Indian food that was more aspirational. We offer great music, great ambiance, and approachable and accessible food,” Yash said.

The Bombay Canteen also aimed to expand the global perspective of what Indian food could be. Most non-Indian people think the cuisine is mostly curries and breads, but those dishes are only a small sample of a more extensive Indian menu.

Indian families don’t eat those heavy foods very often. Instead, most choose to cook at home with fresh, local ingredients purchased from the market.

“People go to the market every day to pick up fresh ingredients. That was the feel we wanted to convey in our restaurant,” Yash told us.

“When we worked at other restaurants, everyone was talking about where the ingredients came from and how proud they were of where they’d come from. We decided that this was how we’d design our menu, too,” Yash said.

“We tell the guest not to worry about the ordering, just let us know about your dietary preferences and things that you like. We curate the meal for you. The element of surprise helps you try new things, and daters don’t have to worry about choosing what to eat,” he said.

The Bombay Canteen: Reopening After the COVID-19 Pandemic

Couples planning to visit The Bombay Canteen for a date night can start by ordering one of its signature cocktails, inspired by India and Mumbai’s storied history. The Perry Road Peru distilled cocktail is made from guavas macerated in gin before being distilled. The cocktail is served on ice with a chili-salt masala rim.

Guests can also delve deeper into the history of Mumbai with one of the restaurant’s cocktail books. The most recent of these is “A Guidebook of the Talkies of Bombay,” which tells a cocktail-oriented history of Bollywood.

“We have a cocktail book now that talks about the film industry. How it began with theaters in Bombay, and what role they played in the evolution of the industry,” Yash said.

Yash Bhanage, Founder and COO of The Bombay Canteen, spoke with us about the restaurant’s mission.

Yash also recommends that partners opt for small plates so they can order several of the restaurant’s most popular offerings. He recommends the Red Snapper Ceviche, made with fresh coconut, sour plum, radish, and red snapper, crispy rice flakes for texture. He also suggests the brioche made with chilis, chutney, eggs, and local cheese.

“India has a huge diversity of cuisines, so we encourage guests to order small plates that let them sample various regions,” Yash told us.

As of early December 2020, The Bombay Canteen is planning to reopen after months of quarantine shutdown. The team has spent that time reconceptualizing the restaurant after more than five years in business.

Yash told us that the team is planning a complete menu redesign that keeps The Bombay Canteen as popular as it has always been. The team also plans on searching for new dishes across India to add to the menu.

“We want to take another look at what we’ve been serving over the last five years and see how we can highlight not only ingredients but also techniques from other regions of India,” Yash said.