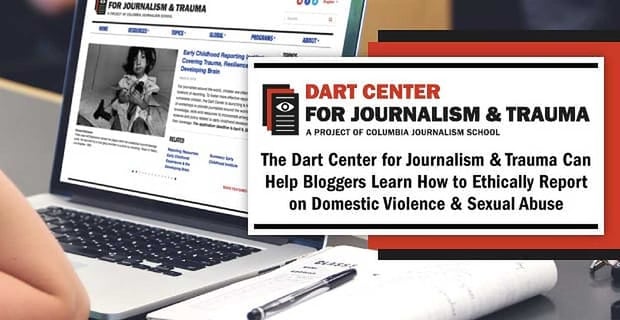 The Short Version: The Dart Center for Journalism and Trauma, a project of the Columbia University Graduate School of Journalism, trains journalists, bloggers, and other professionals to speak with authority and compassion on violence, conflict, and tragedy. The organization promotes informational resources on trauma-related topics and runs hands-on workshops for journalism students around the world. Anyone writing about sexual assault or domestic violence can read through the website’s tip sheets and articles to learn how to discuss sensitive subjects in a thorough and thoughtful way. Through advocacy and education, the Dart Center stands up for the interests of survivors and victims of trauma and teaches others how to ethically tell their stories.

In the late 1990s, a growing number of journalists, educators, clinicians, and victim advocates recognized the importance of reporting on victims of trauma with sensitivity and respect. So they collaborated on projects to teach students how to interview and tell the stories of survivors of domestic violence, sexual assault, and other forms of abuse.

The Dart Center for Journalism and Trauma began an interdisciplinary effort to support news reporting that portrayed the aftermath of violence, conflict, and tragedy in an ethical and compassionate way.

“Journalists, clinicians, victim advocates, and journalism educators all found ourselves struggling on same terrain,” said Bruce Shapiro, Executive Director for the Dart Center. “Among journalists, some of us were reporting issues like domestic violence and street crime, some veterans and war, some human rights or disaster, but we all felt we needed more knowledge and tools for covering trauma.”

By pushing for greater trauma awareness in the media, the Dart Center supports a sincere and sensitive discussion of weighty issues.

Over the decades, the Dart Center has responded to mass shootings, terrorist attacks, natural disasters, and other tragedies with a firm resolve to inform, support, and empower the journalists and victims caught in the aftermath. This project, funded by the Columbia University Graduate School of Journalism, provides educational resources on trauma coverage as well as a peer-to-peer forum for journalists reporting on sensitive topics.

The research center’s ultimate goal is to improve media coverage on tragedy, conflict, and trauma, including domestic violence and sexual assault. In the wake of the #MeToo movement, this issue has become particularly important for the journalists and bloggers who seek to expose the truth without exploiting or harming the victims of traumatic events.

“Since we started this work 20 years ago, there’s been a sea change in journalists’ awareness of trauma — both its impact on society and its impact within journalism,” Bruce told us. He pointed to the recent investigative reporting on campus sexual assault and Hollywood harassment scandals as an example of the good that journalists can do when they tell the stories of survivors of trauma. “We plan to build on that,” he said, “ensuring that innovation continues among the rising generation of news professionals.”

The Dart Center deals with the intersection of tragedy and journalism and is a leading voice in the push for media coverage governed by high ethical standards. The center’s website has an extensive library of tip sheets and background information available for free. Every year, over 250,000 unique visitors comb through these free resources. Additionally, the Dart Center educates over 1,500 journalists worldwide through hands-on training sessions, fellowships, and workshops.

If you’re interested in writing about issues relating to trauma or tragedy, you can learn a lot from the expert journalists and survivor advocates featured by the Dart Center.

The Dart Center advocates for the rights of survivors and the duties of journalists. Its educational resources on victim psychology, law enforcement, media standards, and public policy help anyone who wants to open a discussion about intimate partner violence, sexual assault, and other sensitive issues.

The center’s resources on intimate partner violence and sexual violence strengthen the participant’s interviewing skills, storytelling ability, and trauma knowledge, so he or she can ethically, competently, and compassionately discuss tragic occurrences. Recently, the team gave nine female news professionals a platform to discuss their experiences with sexual harassment and best practices in reporting similar stories. You can find their insights in this 12-minute video:

As Bruce said, “The Dart Center’s programs and resources are all designed to prepare journalists with top-level, scientifically-rooted knowledge about violence and its impact, combined with journalist-to-journalist advice on turning that knowledge into powerful journalism.”

The organization also supports journalists who have encountered violence and tragedy while doing their jobs. The website’s tip sheets cover how to cope with tragedy, manage stress during tough investigations, and deal with issues that may arise when covering traumatic events. Plus, the Self-Care and Peer Support page lends support to journalists, first responders, and emergency workers facing emotionally trying situations in the course of doing their jobs.

In addition to its online resources, the Dart Center funds flagship programs that equip journalists to interview victims and survivors with greater understanding, compassion, and skill. The Dart Center Ochberg Fellowship brings 15 journalists to Columbia University to undergo an intensive program of training seminars and discussion groups. Since 1999, this fellowship has taught over 200 journalists from 25 countries.

Bruce began his career as a human rights investigative reporter and political journalist. His work impressed upon him the need for compassionate and informed journalistic practices. In 2006, he became the first full-time executive director of the Dart Center where he leads a diverse team of academics and advocates.

Ben Shapiro took over as Executive Director of the Dart Center in 2006.

“I remain optimistic about the power of trauma-informed journalism to make a difference,” Bruce wrote in the weeks after the 2016 presidential elections. “At its best, honest and rigorous reporting is a powerful antidote to violence, and stands as a bulwark against scapegoating, terrorism, racism, and bullying.”

Dart’s Research Director, Dr. Elana Newman, is one of the best trauma psychologists in the world. Her specialty is in gender violence and how covering trauma impacts journalists. She formerly served as president of the International Society for Traumatic Stress Studies.

The Dart Center’s team also includes a British TV and documentary producer, an esteemed Australian trauma counselor, journalist students at Columbia, and other media professionals. “The Dart Center is a deliberately interdisciplinary team,” Bruce told us. “Our bigger network of close collaborators include working journalists from around the world who’ve been fellows in various Dart Center programs, and some of the best trauma clinicians and researchers in the world.”

Together, these altruistic individuals look out for the interests of journalists, victims, and survivors worldwide. In the past two decades, their collaborative efforts have raised the standard of media coverage and increased the public’s understanding of trauma-related issues.

Although the Dart Center began as a supportive network for working journalists, it has since expanded to reach out to the public at large. According to Bruce, “The Dart Center’s online resources are designed to be informative and helpful to anyone grappling with the challenges of portraying violence, ethically interviewing survivors, or accurately educating the public about trauma.”

Survivors, coaches, and bloggers can draw on the website’s resources on sexual violence, assault, and other forms of abuse to learn how to talk about such weighty topics in a productive and trauma-informed manner.

“Whether it is #MeToo or #NeverAgain, veterans or refugees, trauma touches on the basic stories that define us as a society,” Bruce said. The Dart Center addresses the challenges of reporting on violence or trauma and promotes ethical ways to interview and write about survivors.

Nine women lent their voices to the Dart Center’s powerful video on sexual harassment in journalism.

Sexual assault has become a hot topic in the news recently, and it’s important that anyone adding their voice to the discussion does so in a responsible and sensitive manner. A blogger who usually discusses flirting tips and date etiquette may not know what to say to comfort or defend survivors. What words can help them heal? What advice can keep them safe?

By delving into the Dart Center’s resources, bloggers and other writers can learn about trauma-related subjects and then share authoritative insights with their readers. Whether you’re writing a memoir or a how-to guide, you can do your homework and find support through this enterprising organization.

When asked about the future of Dart Center, Bruce noted growing influence of women on the world stage. “Journalism is also, increasingly, a female-dominated profession. Around the world, the overwhelming majority of journalism school graduates are women — and that is shaping the Dart Center’s mission as well as journalism itself.”

The Dart Center: A Compassionate Moral Authority in the News

Since the 1990s, the Dart Center has been a positive influence on journalists and other professionals who work with trauma victims. The organization’s exhaustive resources and steadfast support has empowered thousands of individuals to share stories of violence and tragedy in a respectful and ethical way.

“I remain optimistic about the power of trauma-informed journalism to make a difference.” — Bruce Shapiro, Executive Director of the Dart Center

Anyone who wants to talk about violence, abuse, or tragedy — whether it’s through a televised news broadcast or a dating advice blog — can rely on the Dart Center to supply measured and moral guidance on trauma-related topics. You can use the organization’s online resources to inform yourself so you can inform the public and promote a constructive dialogue with survivors and victims of violence.

“News professionals are the heart of the Dart Center’s mission,” Bruce told us. “Journalists are a global tribe, and we provide resources and training to reporters, editors, and producers on every continent.”