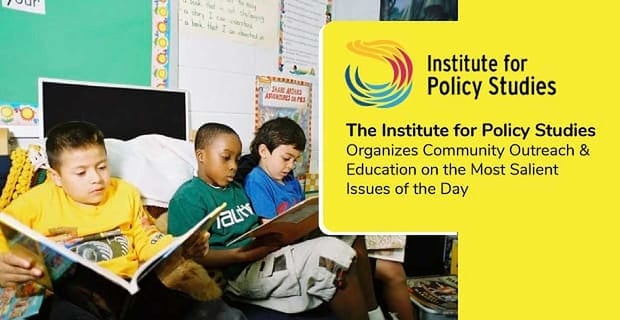 The Short Version: The Institute for Policy Studies is a progressive think tank that provides an organizational structure for activists and academics working on national and international policy initiatives. This pioneering advocacy group started influencing governmental policy and supporting social movements in 1963 — and it hasn’t wavered from its mission to make the world more peaceful, equitable, and sustainable. Today, IPS educates policymakers as well as the public on important social issues, including economic justice, climate change, human rights, and international affairs. In addition to arranging for policy experts to give briefings on the Hill, IPS frequently organizes educational events in Washington, DC, where members of the community can come together to learn more about hot-button political topics. You can attend its book signings, film screenings, or discussion panels to network with people who share your passions and interests on political matters.

Activism is more than a job — it’s a passion. When I worked on political campaigns in college, I met so many people who shared my ideals and my drive to make a difference. That quickly bonded us together. We built strong personal relationships while working on a common cause, and a lot of my political friends became romantically involved with fellow activists.

One guy I know lives in DC and recently got engaged to someone who worked for the same political action committee he did. Instead of dinner and a movie, they consider a protest march and a rally as a perfect date activity. A few months ago, my friend proposed by holding a sign reading “Will you be my running mate for life?”

When you find people who agree with you on the issues you consider important, you can build a powerful coalition that stands the test of time. Those relationships form the foundation of any successful social movement. So, if you’re politically minded, an advocacy group can help you grow your social network and your social influence at the same time.

The Institute for Policy Studies (IPS) is a broad-based progressive think tank where individuals can come together in support of dynamic policy ideas.

For over 50 years, IPS has provided a multi-faceted organizational platform for activists working on local, national, and international projects to make modern communities more equitable, democratic, peaceful, and sustainable.

“I feel pretty fortunate to be able to work with a lot of smart people,” said IPS Events Coordinator Netfa Freeman, who has been with the organization for 18 years. “People here really are trying to change the world, and they’re very astute at what they do.”

In the course of its community outreach projects, IPS partners with policymakers and policy experts to educate and mobilize progressive individuals who want to make a difference. You can find out how to get involved here and become part of a tight-knit community of leaders, idealists, and advocates.

Marcus Raskin and Richard Barnet served in the Kennedy administration hoping to effect systematic changes in government and society. However, they soon realized that in a democracy the power to make change didn’t come from the leaders at the top — it came from the people on the ground. In 1963, after two years of working as government insiders, Marcus and Richard left the administration to found the Institute for Policy Studies, a think tank that could put the will of the people into action.

The Institute for Policy Studies is a progressive think tank that supports democracy, social justice, equality, and peace.

Marcus and Richard wanted to create an organization that could offer a respected progressive voice on various issues, including the Vietnam War and environmental policy. These visionary men believed Americans needed policy experts who could analyze current events from an academic perspective.

Investigative journalist I. F. Stone dubbed IPS “the think tank for the rest of us.” It helps ordinary Americans understand what’s going on in the world.

This pioneering institute was one of the first politically minded groups that pushed for progressive ideals in all aspects of society. It set the stage for many other similar organizations, and many future progressive leaders started as interns at IPS.

Throughout the decades, IPS has been at the forefront of many hot-button issues, including the Anti-Apartheid Movement in South Africa in the 1990s. IPS’ team was also instrumental in helping to launch a broad-based coalition opposed to the Iraq War in 2003. This coalition supported peace and justice, raising awareness about the issues influencing the George W. Bush administration’s decision to go to war.

Whether they’re writing briefings for congressional leaders or uniting advocacy organizations under a common cause, IPS informs people about the issues at hand and provides sound policy recommendations that shape governmental actions.

According to Netfa, “IPS has always sought to be a resource and a partner with the progressive movement, particularly for academics, policymakers, and activists.”

IPS’ Events Calendar is packed with educational and impactful events held throughout the DC area. People from all walks of life gather together to learn more about an issue and figure out what they can do to make a difference. The attendees range in age and ethnicity because some issues resonate more with different types of people. An educational panel about economic challenges in an African country, for example, will primarily interest people who are from that country themselves or who know someone from there.

IPS holds frequent book signings, discussion panels, film screenings, and general educational forums to engage people on particular social issues, including climate change and social justice. An issue doesn’t have to be on the news to be on IPS’ agenda. The IPS frequently coordinates events to raise awareness or introduce people to an expert in town.

“Orlando worked tirelessly to expose the dictatorship and restore democracy in Chile,” Netfa told us. “We founded the Human Rights Awards in their names to honor people and organizations that are doing some unrecognized and cutting-edge work in the social justice arena.”

Over 400 people, including many celebrities and policymakers, attend the Letelier-Moffitt Human Rights Awards to celebrate good people doing the right thing. IPS gives one award for domestic work and one for international work. A majority of the international recipients have been humanitarians in Latin America. This prestigious award offers a meaningful show of support to recipients who may not always make headlines but deserve recognition.

IPS community events strengthen its social movement by introducing people to new ideas in a dynamic setting. These events help individuals expand their understanding of the issues and connect with people who want to further the same progressive ideals. By creating a network of community members united by shared convictions, IPS has established itself as a leading organizational influence in international public policy.

“We see our events as a way to create a personal connection between the public and our experts doing this work,” Netfa said. “When we create an event where people can come and ask questions, it’s a much more personal experience. We try to make it a lively experience, so it’s not just boring talking heads.”

When you join a campaign, you become part of something larger than yourself. You have the chance to put your ideas into action and to turn complete strangers into some of your closest friends. By becoming an engaged member of society, you open yourself up to new experiences and diverse people you may not have met otherwise. Whether you feel passionate about a particular issue or generally support progressive ideas, you can join a powerful activist community by attending an IPS event.

The organization’s book signings, film screenings, and other local events offer individuals a chance to learn more about salient social issues and meet people who share similar interests. Who knows? You might encounter your future running mate while you’re there. One thing’s for sure: At IPS, you have a lot of opportunities to get to know passionate and ambitious people who like to dream big.

“We build a person-to-person relationship with people,” Netfa said. “We’re always trying to organize events and promote projects to become more effective at transforming the society we live in.”