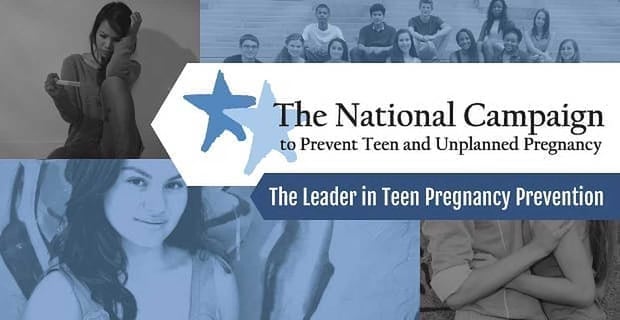 The National Campaign: The Leader in Teen Pregnancy Prevention

The 411: For the past 20 years, The National Campaign has been the leading organization in the effort to reduce teen and unplanned pregnancy and has improved the lives of thousands of children and families throughout the U.S. with their services.

What started as an independent initiative during the Clinton Administration has now become one of the most successful institutions dedicated to preventing teen and unwanted pregnancy: The National Campaign to Prevent Teen and Unplanned Pregnancy.

“As a small organization, we like to think about the most strategic things that we can do to try to reach teens, young adults, policymakers, parents and others nationwide,” said Bill Albert, Chief Program Officer.

“To improve the lives and future prospects of children and families and to help ensure that children are born into stable, two-parent families who are committed to and ready for the demanding task of raising the next generation.”

They’re doing just that, and here’s how:

Based in Washingtong, D.C., The National Campaign focuses on promoting responsible behaviors and policies that help to prevent teen and unplanned pregnancy, and the team does that in a variety of ways, including developing in-house research and participating in public policy efforts that fund national educational programs.

“This tends to be an issue that people care passionately about and that is often controversial, and our role in all this back and forth is that we are a research-based organization. It doesn’t make controversy go away, but it often helps,” Albert said.

Teen pregnancy rates have been declining in all 50 states since 1992.

The National Campaign also works with the entertainment media, including shows like “16 and Pregnant” and “Teen Mom,” to reach its audience directly.

“We are trying to go to where teenagers are, and where they are in large numbers is consuming entertainment media,” he said. “Working with MTV on shows that are focused on teen pregnancy and the potential consequences of early pregnancy and childbearing is very attractive to us, so we worked with them over the years to get the word out.”

But perhaps the foundation’s biggest achievement is collaborating with other caring organizations to get the rates of teen pregnancy in the U.S. to historic lows, which have been declining almost every year since 1992 in all 50 states and among all ethnic groups, according to Albert.

“Our goal has always been a specific numeric reduction in the nation’s teen pregnancy rate,” he said. “Now are we the only organization responsible for that? No, of course not. But we’re pretty confident that we’ve played some role in that.”

While The National Campaign has already done so much in the past two decades, Albert said it’s not time to hang up that “Mission Accomplished” sign just yet.

“When you look at the rates of teen pregnancy declining and continuing to decline and the fact that the pace of progress has picked up, if anything, over the past five or six years, that is, of course, very gratifying,” he said. “One of our primary challenges going forward is to help the nation understand that the challenge of teen pregnancy remains. Progress is possible, but it’s also true that our rates, even with the historic progress that has been made, remain far higher than in other developed countries.”

Looking toward the future, The National Campaign will also focus on helping women in their 20s prevent unplanned pregnancies and encouraging parents to take a more active role in their children’s love lives.

At present, fully seven in 10 pregnancies among single women are described by women themselves s unplanned.

“We began looking at how can we help women in their 20s achieve what they say they want to achieve, which is postponing pregnancy and parenthood at that point in their lives, at least for many of them,” Albert said. “As for parents, we’ve done nationally representative surveys for years now, and one of the most consistent findings that we have is when you ask teens directly ‘Who most influences your decisions about sex?’ teens say their parents. They don’t say their partners. They don’t say popular culture.”

For more information about The National Campaign and all of the great things the organization does, visit thenationalcampaign.org. You can also visit The National Campaign’s sister sites, StayTeen.org, which provides relationship advice to people 17 and under, and Besider.org, an online birth control support network for those aged 18 to 29.