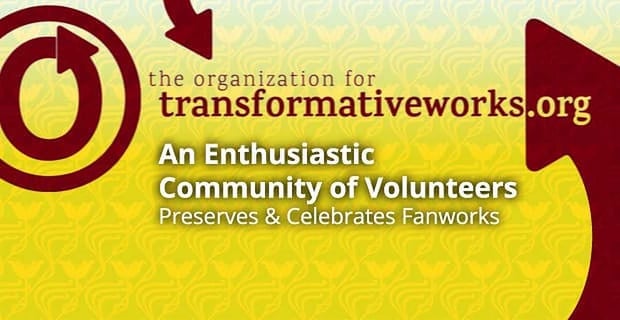 The Organization for Transformative Works: An Enthusiastic Community of Volunteers Preserves & Celebrates Fanworks

The Short Version: Fandoms unite people through shared interests and enthusiasms, so active fan communities are great places to make new friends and build lasting relationships. Fan-created and fan-related content can serve as a constructive starting point for conversations and connections between people who just, well, love to love stuff. Since 2007, the Organization for Transformative Works (OTW) has promoted the importance of fan culture in modern society through volunteer-led and donor-supported projects, including archiving fan fiction online and providing legal advocacy for fans. Over 660 volunteers unite behind the OTW’s mission to support fan culture in all its forms. If this is something you feel passionately about, you can join the team, contribute to its cause, and bolster fan communities around the globe.

From a young age, I wrote stories in notebook after notebook, but I never had the nerve to show anyone my scribblings. That is, not until I discovered Harry Potter fan fiction as a preteen. I saw fan fiction as a storytelling tutorial. You have good raw materials in front of you — a compelling world, wonderful characters, and an eager audience — and all you have to do is put the pieces together in your own way.

The first fan fiction I wrote was about a love triangle between James Potter, Lily Evans, and Remus Lupin. I was shy about posting lengthy chapters at first, but, as more readers left encouraging comments, I began to get into it. Over the years, I wrote more fan fiction and got great feedback that helped me learn and grow. Thanks to HP fan fiction, I discovered a friendly community where I belonged.

When you share a common passion with someone else, it’s easy to build lasting friendships, and many relationships spring from fandom communities because of the inherent passion and positivity of fans.

The Organization of Transformative Works recognizes the importance of fandom and seeks to preserve its history, culture, and works on the web. The OTW is a nonprofit run by volunteers who are committed to the long-term prosperity of the fan community. These motivated individuals advocate on behalf of fanboys and fangirls around the world.

Claudia Rebaza, an OTW communications staffer, has been volunteering with the OTW for seven years, and she said the organization includes people with a wide variety of skills and talents.

“It’s not easy to describe the OTW’s culture since it is ever-shifting,” she said. “The overall personality might be enthusiastic since all of us are fans and that tends to be something fans have in common. Perhaps also a little shy? So shyly enthusiastic with strong opinions?”

If that sounds like your kind of folk, you can take part in the OTW’s many volunteer projects and get to know energetic, intelligent, and opinionated individuals from around the world. The OTW sees over 189 million page views and has over 10 million unique visitors per month, so you’ll have plenty of people to talk to.

“Our volunteer teams can be great places for building relationships with like-minded enthusiasts as well as learning new things,” Claudia said. “Sometimes people see all the things we do and assume that there’s a large paid staff behind it, but nope! We depend on our supporters to keep things running either with labor or donations.”

Founded in 2007, the Organization for Transformative Works is a fan-run and donor-supported effort to serve the interests of fans by protecting and preserving fan culture. Volunteer team members from around the world work together across 22 time zones because they care about saving fanworks, fan terms, and other aspects of fanlore for future generations.

The number of volunteers helping the OTW has grown steadily over the last four years.

From rescuing fanwork collections (such as a Harry Potter archive) to providing legal support and advocacy for fans, the OTW puts a lot of time and effort into supporting fan culture in perpetuity. It’s a go-to resource for all fandom-related things. For instance, the nonprofit promotes scholarship on fanworks and fan practices in its peer-reviewed academic journal Transformative Works and Cultures.

“They also maintain a massive bibliography of academic work that’s been produced on fans and fandom, so if you’re ever looking for what’s already been written, it’s a really good place to start,” James said. “There’s also the Fanhackers blog, which posts excerpts from fan studies research every week and responds to fans looking for information about research.”

The founding project of the OTW was its Legal Advocacy Group, which protects and defends fanworks from commercial exploitation and legal challenges, but the organization has since branched out to archive fanworks, define fanlore, and represent the interests of fans in a number of ways.

The OTW’s largest project, the Archive of Our Own, has attracted over 1.3 million registered users with its mission to centralize fanworks, including fanfic, fanart, and fan videos. This comprehensive archive allows fans to engage in a dialogue over the works they love. By the end of 2018, the OTW team expects the archive to encompass around 4 million fanworks. Five committees are working on this ambitious project.

Hundreds of volunteers handle the coding of the site, testing new features, creating tutorials, helping users troubleshoot any issues that arise, as well as dealing with plagiarism and copyright infringement claims.

Readers can search Archive of Our Own to find a new fan fiction to fall in love with.

Another popular project called Fanlore allows fans to document their experiences and understanding of fandom. This fandom wiki has over 45,000 entries about notable works, terminology, activities, and history relating to fan culture. You can scroll through the site to learn about the tropes, people, chronology, and communities that have impacted fans around the world, or you can add your two cents to this fantastic glossary.

“Fanlore is open to anyone who wants to add information,” James explained. “You just create an account, take a look at the intro for newcomers, and then start either adding information to an existing entry or create a new one. It’s probably the quickest way to get started on any of the OTW’s projects.”

Hundreds of Volunteers Contribute to a Unique Nonprofit Effort

Members send the OTW supportive messages every day, but they don’t publish testimonials because the organization cares about protecting its members’ privacy. Anonymity has always been an important part of fan culture, and the OTW only requires board members and members of the communications team to use their real names.

“While some people in the OTW volunteer under their legal names, over half do not,” Claudia told us. “Most people use some kind of pseudonym and may well want to avoid any publicity. So we do monitor things like user traffic — but it’s up to individuals to decide how much they want to reveal about themselves.”

“Thank you so much for being our advocates!” — FawkesyLady, an OTW project user

While the organization doesn’t collect much user data, some fans have posted surveys over the years to get a general sense of who’s using the OTW projects. These surveys have indicated that the OTW’s audience is primarily female and under the age of 25. The community also has a significant number of LGBT members. While members come from all over the world, a majority hail from English-speaking countries, particularly the US, the UK, and Canada.

The OTW relies on its vast network of volunteers and donors to stay operational. In April 2018, the organization raised over $130,000 from nearly 4,800 donors in its week-long membership drive. Many fans said they were happy to contribute to the cause.

“I’m always proud of contributing a little, as I’m proud of being part of a community that supports itself instead of relying on huge amounts of ads,” wrote Little_Firestar84 in a comment.

“Props to the peeps who keep this place running. Stuff like that is a lot of hard work and all too frequently thankless. So: THANKS!” — Gingerbred, an OTW project user

Over 660 volunteers pitched in and helped further the OTW’s many projects in April 2018. “Every time we recruit for a role, I’m floored by how many people apply,” said Rachel Bussert in a Q&A about the OTW. “There are a lot of really amazing people who put their heart and soul into this.”

This is a passion project for these zealous men and women around the globe. Some members have been part of fandoms for decades, so they love sharing their passions, supporting the fan community, and keeping fan culture alive and well on the web.

“It’s safe to say we have a wide age range of people both using our projects and volunteering in the OTW,” Claudia said.

Since 2007, the OTW Has United People Around Fan Culture

Fan fiction can open people up to new ideas, wonderful experiences, and fruitful relationships with other passionate fans. When I was growing up, an online community of Harry Potter fans supported me as I experimented with plot and developed my voice, and, even though I never knew most of their real names, I felt forever bonded to the writers and readers I met on the discussion boards.

The Organization for Transformative Works wants to help fandoms thrive by giving fans a safe place where they can find camaraderie, entertainment, and a sense of belonging. Through its not-for-profit efforts, the organization has established itself as a central hub for fan knowledge and culture. Hundreds of dedicated volunteers work to archive fanworks, advocate for fan interests, and foster fan communities on a global platform.

In the last decade, the OTW has evolved and expanded to better serve the needs of its members, donors, and volunteers. Claudia said the size and breadth of the team offers many challenges, but they do their best to work together on projects and look out for the fans.

“We focus on keeping things running, keeping things current, preserving our history and creations, and continuing to improve what we can offer,” she said. “That’s a good goal.”