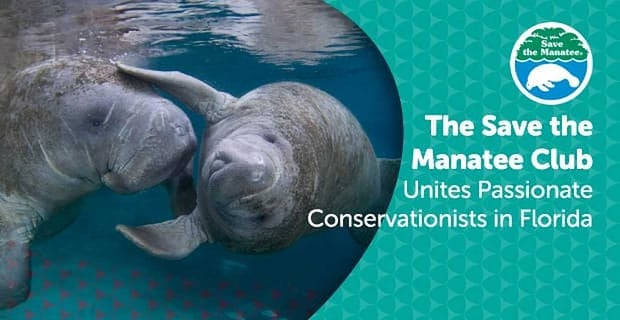 The Short Version: The Save the Manatee Club is the world’s leading nonprofit organization fighting to save manatees from man-made and environmental threats. Since 1981, a Florida-based team of environmentalists and animal lovers have come together to protect manatees and their aquatic habitat so they may survive for future generations. If this is something you feel passionately about, there are ways you can support the group and get involved with the community. You can make a donation, sign petitions, or volunteer with the organization. Volunteers can make a difference by raising awareness among students, boaters, and other community members about the dangers faced by today’s manatees. Getting involved with the Save the Manatee Club gives people the opportunity to have a positive impact on the world while meeting others who care about the health and safety of the manatee.

In 1981, then-Florida Gov. Bob Graham took his daughters to a Jimmy Buffett concert. They went backstage after the show to talk to the iconic singer-songwriter, and, during their conversation, the subject of manatees came up. Jimmy wanted to know what Florida was doing to protect the state’s population of sea cows — and what more could be done. He offered to give his support to state conservation efforts to ensure the long-term health and safety of manatees.

Shortly after their conversation, the governor formed the Save the Manatee Committee and named Jimmy Buffett as its chair.

Patrick Rose joined as the committee’s Scientific Adviser, and he assisted the organization’s efforts to protect aquatic ecosystems and raise awareness about manatee safety. For instance, Jimmy Buffett held concerts to raise money for the nonprofit as it lobbied for greater environmental protections in the state of Florida.

“I can’t say enough about Jimmy Buffett,” Patrick told us. “His simple inquiries in 1981 led to immense differences in how we proactively protect manatees today.”

Patrick is now the Executive Director of the Save the Manatee Club, which continues to do nonprofit work inspired by a deep love for manatees. The team has fought to increase protections for Florida’s aquatic creature, incorporate educational programs in elementary schools, and introduce waterway signs to warn boaters to slow down and respect manatee habitats. Through its good work, the Save the Manatee Club has established itself as the voice of manatees throughout Florida and in the rest of the world.

This award-winning nonprofit has helped significantly increase the manatee population in the US — today almost 7,000 manatees live in the Southeast — but the peaceful mammals still face significant threats from boat propellers, pollution, and long-term environmental shifts.

“Manatees really don’t have the ability to be aggressive,” Patrick told us. “They’re very unique. People should speak up for them and look out for them.”

The Save the Manatee volunteer team distributes educational materials at events and festivals held throughout Florida. Volunteers set up education booths and help spread the word about things ordinary people can do to save the manatee population in Florida and beyond. Some volunteers give presentations at schools or libraries or work with environmental groups to raise awareness.

The Club’s Take Action page is full of ways to lend a hand to the effort to protect manatees and their habitats.

You can volunteer or adopt a manatee for $25 to support the Save the Manatee Club.

The Save the Manatee Club relies on the support of its members to engage people and show them the small things they can do to make a difference. The Manatee Sighting Network helps researchers keep track of the manatee population. If you spot a manatee in the wild, you can fill out a form and email or mail it to the Save the Manatee Club.

The club also works alongside schools and teachers to provide educational resources to help students understand where manatees fit in the ecosystem. The Save the Manatee Club also educates boaters about the danger their hulls, propellers, and fast-moving boats pose to manatees floating beneath the surface of the water.

“The vast majority of boaters do care and don’t want to hurt manatees,” Patrick said. “It’s about reaching out and meeting people where they are.”

The Save the Manatee Michigan 5K race is held annually by biology teacher and huge manatee fan Lesley Argiri to benefit the Club. The organization supports the efforts of Lesley and her faithful student volunteers by donating manatee plush toys and a variety of educational materials for race day.

The Save the Manatee Club sets up many educational tables during Earth Day events in Florida. Photo by Karen Ann Bunce.

In recent years, the Save the Manatee Club has branched out internationally to do positive, proactive work in West Africa and South America. The team has had to be innovative to come up with solutions and alternatives for locals who still hunt and kill manatees for food and trade.

Joining the Save the Manatee Club is a terrific way to do something good for the environment while meeting people who share similar values and goals. This nationwide network of volunteers has had a positive impact on the livelihood and safety of thousands of manatees.

An Inspirational Team Speaks Out & Pushes for Change

Before he even learned how to swim, Patrick loved the water. He told us he spent much of his time in creeks and lakes in his hometown. By the time he was 20, he was a professional scuba diving instructor. He later earned his degree as an aquatic biologist, developed nonprofit educational and research programs as well as serving as the first federal Manatee Recovery Activities Coordinator before he was tapped to join the Save the Manatee Committee.

Patrick told us he was a teenager when he first saw a manatee underwater, and, because of the murkiness of the water, the first thing he saw was its disfiguring scars from a boat propeller. It hit home for him in that moment how vulnerable these slow and gentle creatures were. He has since dedicated his life to the preservation of the species and its aquatic habitat. Today, Patrick is considered one of the world’s leading experts on the Florida manatee.

“I can’t really think of a better species to represent,” he said.

The Save the Manatee Club brings environmentalists together under a common cause.

Many Save the Manatee staff members began as passionate volunteers and found a home on the team. Cora Berchem approached the organization because she wanted to make a documentary about manatees.

Cora began getting involved in the day-to-day work and today she is a full-time staff member. As the nonprofit’s Manatee Research and Multimedia Specialist, she assists with research at Blue Spring State Park and oversees the summer volunteer program to prevent manatee harassment.

Even though manatees are friendly, most don’t want people swimming near them and touching them in the wild, so the Save the Manatee volunteers help ensure the manatees are given their space. The water should be their sanctuary, and humans should respect their boundaries.

Dr. Katie Tripp, the organization’s Director of Science and Conservation, first visited Blue Spring State Park when she was 11 where she picked up a Save the Manatee Club brochure and adopted a manatee. Katie took every opportunity to get involved and eventually moved from Pennsylvania to Florida to attend Eckerd College in St. Petersburg where she majored in marin science.

After graduating college, Katie was recruited by the University of Florida’s Aquatic Animal Health Program at the college of Veterinary Medicine to continue her manatee research. Katie received her PhD from UF and immediately began her work at the Save the Manatee Club.

“She basically made it her goal in life to save the manatees,” Patrick said. “We’ve been around so long — we have a couple generations of young people who felt moved by the manatee’s story and got involved with our organization from a young age.”

The Save the Manatee Club’s conservation efforts are driven by the passionate care and steadfast support of volunteers, donors, and staff members. Together, they work to ensure manatees enjoy the freedom to swim safely in Florida’s waterways. Whether they’re handing out pamphlets on Earth Day or giving an educational presentation to students, the Save the Manatee Club does all it can to make the world safer and better for manatees.

Patrick’s leadership has anchored the Save the Manatee Club for many years, and now he’s grooming the next generation of environmental leaders to take over for him. “I’m putting as much effort as I can into mentoring staff members and volunteers,” he said, “and ensuring we have people to carry on the legacy of the organization because our mission is not nearly done, unfortunately.”

The Save the Manatee Club Protects Our Aquatic Ecosystems

The Save the Manatee Club began with just two guys talking about how much they loved Florida’s sea cows, and now it has become an international movement to save the manatees. Jimmy Buffett helped to establish the nonprofit organization because he cared about making the water a paradise for everyone.

If you too care about protecting the environment and keeping manatees safe from harm, you can join the efforts of the Save the Manatee Club as a donor or a volunteer. By becoming part of this mission, you can do something good for the aquatic ecosystem and meet altruistic people who share similar values.

“What we’re doing is beneficial for the manatees and for human health and welfare as well,” Patrick said. “My lifelong goal is to have manatees removed from the endangered species list because their future is both biologically and legally secure, but not because some people want them prematurely removed for political or selfish reasons. Due to collective threats manatees face today, it would likely be impossible to recover the population again if its numbers were to dramatically decline a second time since the manatees’ habitats are suffering from widespread human-caused degradations. Working together with others of like mind, I remain optimistic that we can succeed!”