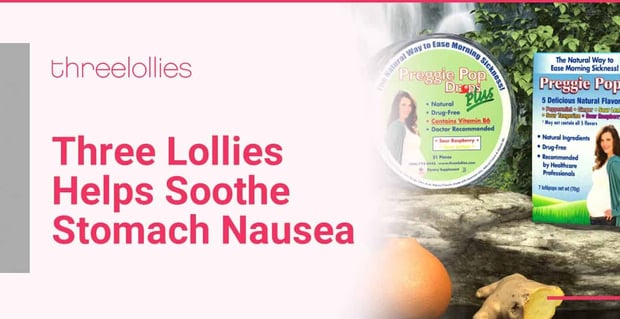 The Short Version: Three Lollies uses natural ingredients to soothe nausea ranging from slight indigestion to chronic morning sickness. A team of healthcare professionals has developed these lozenges and lollipops as a simple remedy to queasiness, and many pregnant women have jumped at the chance to ease their pain without worrying over prescriptions or medications. Three Lollies currently offers a variety of treats that can give relief to pregnant women, add some fun to a baby shower, or even relieve a single person’s pre-date stomach jitters.

The idea for Three Lollies started with a registered nurse and Lamaze educator named Noni Martin. Years ago, Noni developed queasiness-reducing candies to help fight morning sickness and pregnancy nausea. And it has proven to be a lifesaver for many women.

One woman, we’ll call her Grace, reached out to the Three Lollies team to share her experience using its Preggie Pops nine weeks into her pregnancy with her third child. Grace has been diagnosed with Hyperemesis Gravidarum, which means she suffers severe and persistent vomiting when pregnant. This illness can be life-threatening because it causes pregnant women to struggle to take in nourishment or even stay hydrated.

Grace described her illness as a living nightmare. She had to be hospitalized during her first two pregnancies and actually lost weight (about 15 pounds each time) due to frequent vomiting.

Over the course of her pregnancies, Grace has tried all kinds of diets and home remedies to ease her nausea and keep food down. Nothing worked — until Three Lollies. Grace said she gagged at first from the taste of the lavender lollipop, but she pushed through the initial nausea and then found relief.

“Tears began to well up in my eyes when I realized that this simple little cute lollipop was actually working,” Grace said. “I have no appetite because of the HG but after 10 minutes with the first lavender lollipop, I sat down and enjoyed a plain grilled chicken sandwich and a lemonade.”

Thanks to Three Lollies, Grace found a way to manage her illness. She has now stocked her home with lavender, ginger, and lemon candies that can stop her nausea before it gets out of hand. “I just wanted to thank you from the bottom of my heart,” Grace said in her review.

The Three Lollies team may have taste for silly names — Preggie Pops and Queasy Pops are easy to remember, though. Its formula, however, is the result of serious scientific research. A team of healthcare workers put their heads together to create a nausea remedy that uses natural ingredients and works quickly.

“We did some research into natural pharmacologic agents, reading through the available literature, both scientific and non-scientific,” the Three Lollies team said. “We discovered which herbs are truly helpful, and developed flavors that would be appealing to anyone with a queasy stomach.”

The resulting candies have proven effective at easing stomach pain of all types. Whether it’s calming a single person’s anxiety or helping a pregnant woman get her appetite back, Three Lollies has the ingredients to make nausea a non-issue.

Preggie Pops come in several flavors — including a few sour flavors that pregnant women crave — and offer drug-free nausea relief within minutes. The key ingredient in these pops is Vitamin B6, which is important for keeping the nervous system and autoimmune system healthy. Not only do the lollipops and lozenges soothe the stomach, but they also provide an energy boost.

Preggie Pops are made with USDA-certified organic essential oils.

Over the years, the company heard many stories about husbands, boyfriends, parents, children, and other non-pregnant people secretly sneaking and enjoying Preggie Pops. So it made sense to use the same science to create a tasty product for the general public.

Queasy Pops offer nausea relief to any person with a nervous stomach. It could be a soothing treat during a road trip or boat outing, or it could help calm the nerves a single person may feel before a big date or a job interview.

All types of people experience queasiness in their daily lives, and Queasy Pops can ensure those bad feelings don’t stick around for long.

“From traditional practitioners to the holistic and wellness communities, there seems to be a universal market for a flavorful and simple remedy that makes life a little easier during nauseous times,” the team said. “We are thrilled to offer our customers a tasty way to ease their nausea and help them through difficult times.”

Three Lollies has been around for years and seen many success stories from pregnant women who struggled to cope with queasiness and morning sickness.

A Floridian named Donna said she placed her second order one day after her first one worked for her daughter Michelle. According to this worried mom, Michelle’s morning sickness was so bad it interfered with her work. “After putting the Preggie Pop in her mouth the first day, she called me and said, ‘Mom, these work! Can you please get me the biggest bag they make?’” And that’s exactly what Donna did.

L.W. said in a review that a church friend introduced her to Preggie Pops. The friend had some left over from her pregnancy and knew L.W. had been sick in bed for a month. L.W. said prescription drugs didn’t help soothe the pain, but Three Lollies did the trick.

“I gagged at first when I placed the lavender pop in my mouth, but I finished it, and right now it’s the best morning I have had in 12 weeks! Thanks!”

Three Lollies can offer physical comfort and peace of mind, so they make great gifts for a spouse, a sister, a daughter, or a friend. It could be a great way to show a single mom or an old bestie that you care. Plus, romantic partners can earn brownie points for such a considerate present.

A happy customer with the initials P.D.G. said her husband stumbled upon the Three Lollies website and ordered her the Preggie Pops as a gift. The gift went over great, and she has since relied on these treats for two pregnancies.

“They saved my sanity!” P.D.G said. “Thank you for being so good to pregnant moms!”

Got a baby shower on the calendar? Then the Stork Pop Products could make a fun party favor or non-gag gift. These themed candies come in either blueberry or pink lemonade flavors, and the colorful blue or pink wrapping can fit seamlessly into any gender reveal party or baby shower.

Three Lollies has created a wellness solution to help ease the discomfort and pain of pregnant women as well as anyone experiencing nausea. The lollipops and lozenges rely on natural vitamins and healing properties to give the stomach a rest.

Queasiness, morning sickness, and chronic vomiting can negatively impact a single person’s health and happiness, but Three Lollies can take action to set things right again. As Grace discovered, the benefits of taking a simple lozenge can make all the difference when it comes time to eat.

Whether it’s a baby shower gift or a seasickness soother, the products at Three Lollies can add a healthful, colorful, and flavorful pop to a person’s taste buds.

“As healthcare professionals, we have dedicated our life’s work to helping people in need,” the Three Lollies team said. “Our friends in the field have welcomed our natural products as an alternative therapy for their patients, and the feedback has been great!”