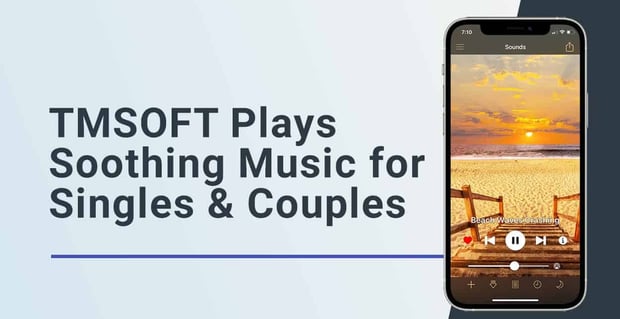 The Short Version: TMSOFT has built a digital library of ambient sounds to help people relax, destress, and get better sleep. Its White Noise app provides free soundscapes that play on loop and envelop the listener with calm. By listening to the sound of ocean waves or crickets chirping, app users can detach themselves from life’s daily cares and escape to a more meditative frame of mind.

A cybersecurity developer named Todd Moore purchased the original iPhone back in 2008 and was immediately intrigued by its potential. He started teaching himself how to build apps to make the nascent mobile experience more robust.

Todd had been accustomed to using a fan at night to ease himself to sleep. The soft repetitive noise was just what he needed to drift off to dreamland. However, turning the fan on in the wintertime was less than ideal.

White Noise can set the tone for quiet periods of rest and thoughtfulness.

Putting his tech skills to good use, Todd developed a white noise application that would serve as a substitute for his fan on cold nights. He simply called it White Noise.

The first iteration of the app had a few basic sounds available — bedroom fan, air conditioner, crickets chirping — and he made it available on the Apple App Store for free. It was among the first apps to launch for iPhone users, and it quickly made its way to the #1 relaxation application.

People of all ages downloaded White Noise and began incorporating its soothing sounds into their routines. The app’s popularity sparked a business venture now led by Todd’s tech company TMSOFT.

Todd originally conceived of the White Noise app as a way to help people maintain a healthy sleep cycle. However, many people have found the app is also useful outside the bedroom. The app has brought calm during a stressful workday, and it has eased nervous jitters before a first date. It can set the mood for a meditation exercise or a quiet hour of reading.

The White Noise app can inspire singles, couples, and families to focus on their self-care needs and make time for relaxation in everyday life.

“Todd made the original app free because he didn’t think anyone would actually pay for it,” said Marissa Lawson, who heads up Business Development for TMSOFT. “Little did he know at the time he had created a tool that would come to help millions of people.”

The White Noise App Has the Backing of Industry Experts

Todd was so passionate about the White Noise app that he made its development his full-time job. TMSOFT has released multiple versions of the app as well as a White Noise marketplace where all online users can listen to ambient sounds and share their favorite tracks.

TMSOFT handles the conception, implementation, and marketing of leading applications and products that use technology to promote healthy, stress-free living.

The TMSOFT team recently went on a retreat to Key West in Florida.

“In a world of big companies dominating the app stores, we’re still one of the small guys,” Marissa told us. “From start to finish, all our apps are produced in-house.”

Todd has been a pioneer in the mobile technology space, and his spirit of innovation continues to motivate the company’s programmers and marketers.

Marissa said Todd, who is a self-taught app designer, has made it a point to support and inspire new voices in the tech industry. TMSOFT provides internship opportunities for students and recent graduates who have a passion for technology. Three out of five of the company’s full-time employees began as interns with the company.

The TMSOFT team works remotely and has employees in Texas, Florida, Delaware, and Washington, D.C.

“Being such a small company and bootstrapped since day one, we tend to wear multiple hats and work together closely to accomplish projects and goals,” Marissa explained.

TMSOFT offers ambient sounds for free, but those who want an ad-free listening experience can pay a one-time fee of $0.99. There is no monthly subscription. The White Noise apps come in multiple versions — Lite, Full, Pro, Baby, and Generators — to meet the needs of a diverse listening audience.

White Noise apps can integrate seamlessly into people’s daily lives. Young singles can play ambient music to soothe their nerves before a date, and older adults can play wilderness tracks to spark pleasant memories as they drift off to sleep.

The most active users are committed to taking care of their mental health, and they use the White Noise sounds to improve their sleep, focus, and mindfulness.

White Noise can also be used by couples who want to make their different sleep schedules more compatible. The ambient noise can mask the sounds of an awake partner, and it can provide a soothing routine that encourages a good rest.

“We all know that we aren’t at our best when we’re not getting an adequate amount of sleep,” Marissa said. “This applies to our relationships just as much as it does our work or school.”

The White Noise app has a mix pad that allows users to add multiple sounds to create their own unique soundscape. This can be important for singles who want to shake things up and couples who have to agree on the sounds that play in the bedroom.

“The app provides an opportunity for the two to discuss their current habits, their goals, and it provides a large library of sounds they can choose from. If they’re using a speaker in the room to play the sound, it may take some compromise,” Marissa said. “If he loves ocean waves and she loves rain, they can create their own blended sound they both enjoy.”

TMSOFT has expanded beyond its applications to give singles and couples access to relaxing sounds on multiple platforms. Its recordings can be found throughout the web. White Noise has uploaded thousands of clips to its online marketplace, and community users have added thousands more from their own libraries  created with the White Noise App. The White Noise Market currently features over 20,000 sounds.

An idea that began with technologist Todd Moore has become one of the most downloaded ambient sounds apps on the market. TMSOFT has promoted the White Noise app as well as the White Noise Marketplace where singles and couples can enjoy easy listening any time of the day or night.

Whether they’re doing the dishes or trying to fall asleep, people can rely on White Noise to feature soothing background sounds that can make listeners feel as if they’re in a rainforest, by the beach, or on a mountaintop.

TMSOFT has made over 25,000 sound tracks available at the click of a button on any mobile or desktop device, so relaxation is never out of reach.

“We love hearing from our listeners, and one of the most common stories we hear involves new parents and their infants,” Marissa explained. “Using White Noise to soothe their little ones to sleep (and keep them asleep!) has been a game changer for many new parents. It’s incredibly fulfilling.”