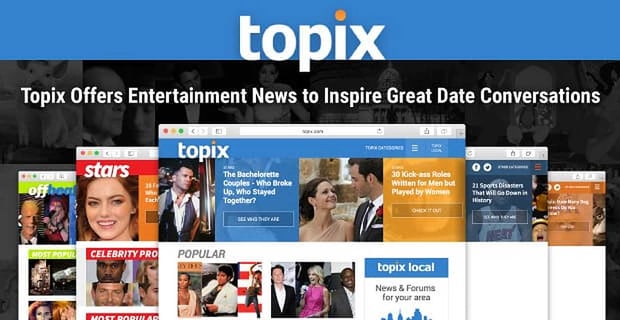 The Short Version: Every month, 18 million people visit Topix, the world’s largest community news website, to browse the latest goings-on in celebrity gossip, sports, health, and pop culture. If you find yourself drawing a blank on your dates when it comes to current affairs and want to up your conversational game, Topix can be an excellent resource for original and viral content. On eight subdomains, the site publishes funny lists and diverting quizzes that offer not just an amusing way to waste an afternoon but shareable articles to send to your crush. The sites see over 5 million monthly shares by people eager to interact with one another — and you can join them to discover your next conversation starter.

I’ve always had a weakness for nerdy guys. Something about the glasses, the unkempt hair, the ability to pick up on arcane references — it all just works for me. I have a problem, I know. Usually that problem involves making sure my dates don’t die of awkwardness before the night ends.

When a pale engineering student asked me out to dinner, I knew it’d be an uphill battle. Our previous interactions involved playing strategy-heavy board games (he kept about 50 piled in his closet) and mostly talking about the inevitability of the other’s defeat.

At the restaurant, we soon ran out of things to say about pizza and menus, and silence descended. I could see the panic in his bright blue eyes. I took pity on him. “Did you hear George Lucas sold out to Disney?” I asked.

Talking about science fiction, such as “Star Wars,” helps to break the ice on a nerdy date.

A lifeline. “Yes! I actually think it’s a good thing,” he said. “You need collaboration, not just one guy on an ego trip. You know, if George had his way in the originals, Han would be this slimy green alien.”

“Disney can’t possibly replicate the accidental genius of ‘Star Wars,'” I scoffed, and we debated until the waitress took our salt and pepper shakers away three hours later.

Actually, it ended up being a fun night.

Entertainment topics bring people together because they’re accessible and something we have in common. On a first date, it’s an easy starting point to learn what movies you should be on the lookout for when the second date comes around.

Following the trends since 2006, Topix keeps readers informed about the latest news in entertainment. The website has seen over 1 billion page views altogether, and each month 5 million people share the side-splitting or jaw-dropping content.

With their help, you can consistently impress your dates by bringing up topics people are talking about. The Topix websites cover various subjects, including celebrities on Stars.Topix and sports on Sideline.Topix. Over 360,000 news pages are spread out across eight categories on this online treasure trove. Whether it’s gossip, health, or cute puppies, you’re sure to find some eye-catching tidbits to meet the interests of your date.

“Combining our unique approach to presenting topical news and the intuitive navigation tools available,” the Topix website reads, “Topix offers the quickest and most comprehensive way to find the news that matters to you.”

Keep Up With Pop Culture By Checking Topix’s News Pages

Pop culture invades daily conversations and permeates common vernacular. People don’t want to be on the wrong end of “What? You’ve never heard of this incredibly famous thing?”

One time, my high-school boyfriend started arguing with me because he didn’t know what I meant when I said his leather jacket made him look like Fonzie (a really scrawny Fonzie, but still). A simple compliment spun out of control because his parents never let him watch television.

You can save yourself some embarrassment and heartache by checking Stars.Topix for celebrity profiles and celebrity quizzes. That’ll keep you up to snuff on entertainment icons, so you can tell the difference between Zac Efron and Zach Braff.

Topix’s varied collection of popular content appeals to people of all ages, genders, and backgrounds.

In Topix.local, you can find location-specific articles, dating personals, and a forum of people near you. The forums could be good practice starting a conversation about things that interest you, so don’t hesitate to jump on in.

And it never hurts to have a few puppy pics in your pocket for a rainy day. Look to Pawsome.Topix for adorable articles about fuzzy pets.

People often play pass-it-on over the Internet. It could be a blue and black dress (it was definitely blue and black, not white and gold) or it could be a kooky quiz — in general, viral content helps you get to know your friends better.

With easy sharing functions, Topix supplies a fun and effective way to keep in touch with a love interest. Nine million millennials a month enjoy Topix’s quizzes and slideshows. Targeted toward a young audience, Offbeat has the most riotous articles like these “37 Amazingly Awkward Engagement Photos.”

The Offbeat site promises: “Offbeat will turn your day around with an uplifting dose of hilarious, heartwarming, awwww, and awesome. We bring you the cutest baby animals, the funniest photos, the most on-point tweets, the best Pinterest fails, the most viral videos, and the most feel-good family moments.”

Taken as a whole, Topix is a place where readers can come together to share a laugh. Every month, the articles are shared 5 million times.

Singles can also find some much-needed comic relief on the site. The OffBeat Valentine’s Day fails slideshow will make you feel better about any of your own romantic flubs. Or you can satisfy your inner hopeless romantic by flipping through these pictures of married couples taken decades apart.

59% of Topix Visitors are Single & Looking for Ways to Connect

The Topix audience is a hip crowd. The average visitor is older than 25, single, and makes about $75k. The gender breaks down to about 60% female and 40% male. This fun-loving audience seeks comedy and connection in the vast library at Topix.

Mobile has become a major part of the site with 32% growth year-over-year.

The quizzes in particular can be an excellent way to get a conversation rolling.

Sending the link to someone you like is a quick way to let them know you’re thinking about them. From celebrity gossip to healthful recipes, on Topix you can find a wide variety of articles to capture your crush’s interest.

“Topix is the world’s largest community news website,” it says on the site’s FAQ page. “Each story and every Topix page comes with the ability to add your voice to the conversation.”

Entertaining news is a shortcut to getting to know someone and sharing opinions, laughs, and fun facts in a lighthearted way. Whether you believe George Lucas is a sellout or an artistic genius is beside the point — the point is to demonstrate your ability to hold an interesting conversation while learning about your date.

To the delight of millions of readers, Topix churns out timely and entertaining content that captures the imagination and tickles the funny bone. You can use their diverse content as a shoehorn into a riveting discussion with your date.

Topix posts uniquely popular and clickable articles, quizzes, and slideshows that are made to connect you with the larger world. Creating an instant bond with someone special is easy when you have pop culture on your side. Whatever topic you land on, let it be the conversation starter that gets you in the good graces of your love interest.