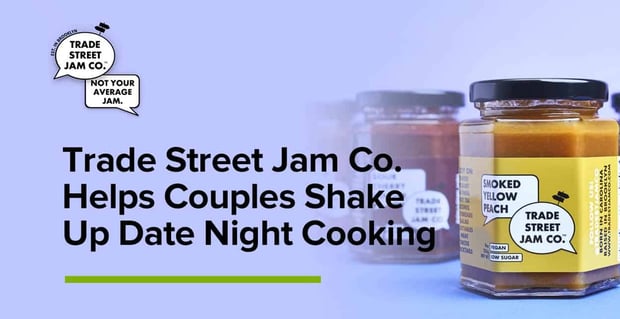 The Short Version: Months of quarantine have kept many couples from exploring adventurous meals out on the town, so they’ve been turning to their own cooking skills for date nights at home. Trade Street Jam Co. offers unique, bold products that can shake up the monotony in meal and drink preparation. Its jams offer a wide range of culinary potential outside of their traditional use on toast and crackers. Couples can add Trade Street Jam Co. flavors, including Strawberry Chipotle and Fig or Blueberry Lemon Basil Jam, to savory dishes, desserts, breakfasts, and even cocktails.

Many couples have been stuck in the same quarantine cooking routine for too long. They may make the same few meals on a steady rotation but want to shake up their menu for a special date night.

If that’s the case, couples can visit the Trade Street Jam Co. online to order some sweet and spicy jam varieties and learn of some delicious recipes to make together.

They can also make dinner, dessert, and cocktails together for a weekend date night. Trade Street Jam Co. New York Strip Steak with Blackberry Jam Butter is a favorite made with thyme, honey, chives, and Blackberry Mulled Merlot Jam.

The recipes aren’t complicated, and each jam’s complex flavor helps liven up the typical routine. After a while, couples may find new ways to spice up other recipes with jams, too.

Many jam lovers are surprised with how creative they can be with Trade Street Jam Co. products. However, Founder Ashley Rouse said she has always wanted to show people how much they can do with jam.

“There’s more to jam than just putting it on toast! You can put our jams on almost anything you’re cooking — on steak, roasted brussels sprouts, or in champagne. It’s a condiment, not just a jam,” Ashley told us.

The Flavors Keep Customers Coming Back

“Our texture is different. We call it spoonable. People understand that it’s because we’re not putting a lot of sugar that globs up your jam,” Ashley said.

Refrigerating the jams or adding cornstarch can thicken them, if needed.

Ashley uses her culinary background and commitment to innovation to concoct new combinations and new jam flavors. She then connects with local farmers on the East Coast to find fresh products.

For some jams, the final step is slow cooking to create “a thick, almost buttery spread.” Other varieties are quick-cooked to keep the fruit’s flavor and color. Next comes the canning process. Jars are hot-filled and upended to ensure they are good for up to a year on the shelf.

“Those three have been our most popular for years, so we sell them as a set. The fruit flavors resonate with our customers,” Ashley said.

Ashley said the company frequently sees new customers who may be wary of what she described as some “out there” flavors, but find the fruit flavors familiar enough to give the jams a shot. For instance, the company turns standard cherry jam on its head, transforming it into Sour Cherry Ginger Jam.

“Once they try it, they’re stuck with us,” Ashley said.

Building a Community of Jam Lovers

Jam-making has long been part of Ashley’s culinary DNA.

“I love the concept of having produce in a season you couldn’t have. Like eating delicious cherry jam in the dead of winter,” she told us.

She started concocting her unique jam flavors back in her small apartment in Charlotte, North Carolina, and has been a professional chef for nearly 15 years. After giving her jams to family and friends as holiday gifts for years, she decided she’d officially launch a business — and name it for the street on which she lived.

Trade Street Jam Co. Founder Ashley Rouse spoke with us about her love of bold flavors.

“I promised myself I was going to build my jam business and name it after my street, Trade Street,” she said.

She kept that promise. After moving to Brooklyn, Ashley found a team of people willing to help her grow her business. Though she still is the only full-time employee, she has three volunteers, including her husband Don, who help her operate the business and fill orders.

Over the years, the company has developed a devoted fan base. Some Trade Street Jam Co. lovers use the products so frequently that Ashley and her team created the Jam Club. Members can receive automatic shipments, 15% off of their orders, access to newly released products, and more digital recipes.

“It’s important to me that people are rockin’ with us for years now. They love what we’re doing,” Ashley said.

The company has also developed a following around the country.

“We sell a lot of jam on the East Coast and West Coast. We’re based in New York, so we have our base here. We also sell a ton to California, where they eat healthily, and they’re in on trends,” Ashley said.

Trade Street Jam Co. Shows You How to Level-Up Recipes

Trade Street Jam Co. products are tasty enough to elevate standard bread-and-butter breakfast. Ashley also wants couples to know that they can improve their date-night cooking without thinking too hard.

“Cooking from home is great for couples. We have fun drinks and desserts you can make. Even appetizers and dips that can be cute and romantic,” Ashley told us.

Cooks around the country have used Trade Street Jam Co. jams to elevate their meals. The company’s customer base has kept growing during the pandemic, more than quadrupling its orders during 2020.

Ashley and her team said they want to use that momentum to continue the company’s growth. The company has built relationships with Weight Watchers, Nordstrom, and Macy’s, and plans to develop a way for customers to buy its jams through Amazon.

“We always have a goal to innovate. At the same time, we are growing very fast, so we have to make sure to stabilize our operations,” Ashley told us.

From making jams in her kitchen to shipping products around the country, Ashley has grown Trade Street Jam Co. exponentially over a short period. She and her team don’t plan to change the formula that made the company’s jams so popular in the first place.

“Our products are clean, low in sugar, and don’t have a lot of preservatives. Our clients appreciate the differences in our product. Once they try it, they love it,” Ashley said.