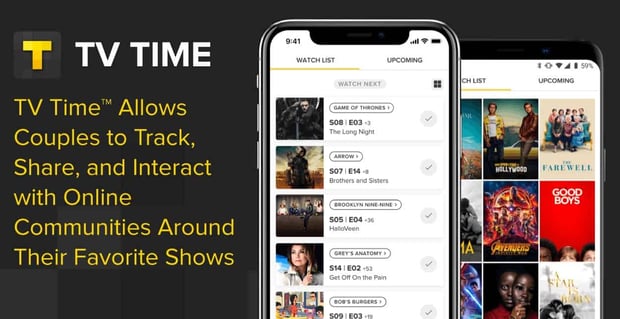 TV Time™ Allows Couples to Track, Share, and Interact with Online Communities Around Their Favorite Shows

The Short Version: Not long ago, people could talk with friends, co-workers, and partners about a TV episode that aired the night before. But now, with streaming platforms allowing viewers to watch episodes whenever they want, that feeling of community has all but vanished. The TV Time app set out to solve that problem by bringing those networks of fans back and making it easier for them to keep track of their shows. The app allows individuals, friends, couples, and families to share insights and thoughts on their favorite shows and connect with other TV fans around the globe instantly.

Maren Ziobrowski and her husband enjoy many of the same TV shows, so they both created accounts on TV Time, an app that allows them to track showtimes and connect with friends and other fans. They selected the shows they currently watch and also listed those they’ve liked or disliked in the past.

“Every person has their feed of top shows on the app. My husband and I often find that a show is on both of our lists, so we decide we’ll watch that one next,” said Maren, the Vice President of Product & Consumer Marketing for TV Time.

After they watch a particularly-gripping episode, Maren and her husband often turn to TV Time to see how other viewers responded to the episode’s twists. In real time, they can answer their questions, including “Did others find a particular moment shocking?” or “Was anyone else upset by a favorite character’s death?”

TV Time allows people to track all of their shows and interact with a community of fans.

TV Time even allows users to let others know that they haven’t seen an episode. When Maren and her husband are apart, they check the app to ensure they don’t spoil anything.

“Once we’ve both marked the show as watched, then we’ll compare notes,” Maren told us.

When users finish watching an entire series, TV Time can recommend similar shows they might enjoy.

“The app uses what you’ve liked before to create personal recommendations for you. And, if you and your partner like the same shows, there’s probably some overlap in your top recommendations,” said Maren.

Like Maren and her husband, many couples use TV Time to keep up to date with their favorite shows on multiple platforms. The app helps users recreate the sense of community they used to feel before the advent of streaming and on-demand TV shows.

“I would use this app even if I didn’t work here,” Maren said.

Designed for a Changing TV-Watching Landscape

The number of original scripted shows airing in the U.S. grew to more than 487 in 2018. That number was significantly higher than the 216 shows airing in 2010. Plus, Americans don’t just watch TV shows from the U.S.; they can now see content from around the world.

Those options have grown so much because of how the industry has changed. In 2018, nearly 60% of Americans were streaming TV shows online — though some also had cable TV. That percentage was even higher among young people.

“There’s just so much to watch, and it’s hard to even keep track of what you’re watching,” said Maren.

One reason for the difficulty in keeping track of favorites is that viewers now watch shows on so many different streaming platforms. Viewers might watch an episode of “Game of Thrones” on HBO then switch over to watch “Superstore” on Hulu.

With that changing TV landscape, there isn’t the same sense of community that once felt refreshing after watching a cliffhanger episode of a popular show. Now, colleagues who gather around the water cooler to share their thoughts on the season finale may have to hold their tongues if a couple of people in the group haven’t streamed it yet.

That leads to fewer people talking about TV shows because they aren’t sure who hasn’t seen it. Even if an episode aired months ago, social media users are often still warned against sharing spoilers.

While that was the culture when TV Time launched, the app now encourages those viewers to connect and continue the discussion.

“We want to solve the problems of our customers because we experienced them ourselves,” said Maren.

Catering to a Diverse Range of Users and Media Types

TV Time users often download the app for one of two reasons. The first is that they want to track all of the TV shows — and movies — they watch. Others want to stay on top of watch lists, so they stay current on episodes and remember the shows they want to watch later.

“With original TV budgets exploding and new shows popping up everywhere, how do you possibly keep track of all the great TV out there?” Maren said.

After an episode airs, users can interact with the community of people who also watched the show. They can rate the episode, describe how it made them feel, and even use the app’s tools to create memes about it. Meanwhile, everything is spoiler-protected from others who haven’t watched the episode.

The app helps users track their favorite shows and discover new ones.

“There’s a mini-community around every piece of content. We see friendships develop based on the comments users make. They share a bond based on what they’re watching,” Maren said.

That model of tracking shows and building friendships makes TV Time immensely popular with users, and more than 1 million people worldwide interact with the app every day. Since its rollout in 2014, the app has registered more than 12 million users.

Those TV lovers have watched a variety of shows, too, tracking 15 billion episodes and 110 million movies. The app helps users find new shows and old favorites across more than 350 streaming and cable platforms.

For the last decade, TV lovers have become increasingly overwhelmed by the number of viewing options, and that anxiety continues to grow. A recent TV Time study revealed that 70% of respondents believe there are too many streaming choices.

That’s why TV Time set out to simplify the process of tracking shows across multiple platforms. That mission has made watching shows in the streaming age even more meaningful.

“People are watching TV all around the world. On different devices, at different paces. Millions of people are finding communities around their favorite shows on our app. The world is becoming a smaller place — all around the love of a good story,” Maren said.

In the five years since its launch, the app has added plenty of popular features — one of which was movie tracking. The feature proved to be so popular that users added more than 100 million movies to their Watchlists in fewer than 50 days. The TV Time team plans to make the feature even more robust in the coming months.

Further, the team plans on adding a shared list, where partners can collectively keep track of the shows and movies they watch — and want to watch — together.

Working on the TV Time platform has been a meaningful experience for the team, and users frequently thank the developers for simplifying TV watching.

“TV and movies bring joy into their lives. To know that we’re making that even more joyful and easier for them, that’s great. We’re providing a benefit to our users. It’s so worth it,” Maren said.