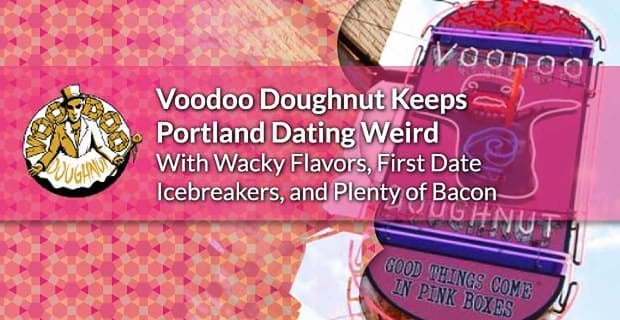 The Short Version: Since it opened in downtown Portland, Oregon, in 2003, Voodoo Doughnut has been drawing crowds and seeing lines form around the block. The doughnut shop broke the mold with unique pastry options like the Voodoo Doll, a doll-shaped raspberry doughnut with chocolate frosting and a pretzel stake, and its famous maple bacon bar. Voodoo Doughnut isn’t popular solely for its crazy flavors. The shop is also known for its quirky atmosphere — think a punk-rock circus — and conversation-sparking décor. Now that Voodoo Doughnut has locations in Eugene, Denver, Austin, Hollywood, and Orlando, you can make sure a first date will be memorable.

Every couple wants their first date to be unforgettable, but what if that date included a doughnut topped with Cap’n Crunch cereal, a ride on a quarter-powered elephant, and a discussion about a doughnut-themed stained-glass window? Then you probably made a smart choice to have your first date at Voodoo Doughnut.

Voodoo Doughnut has been a great date spot in Portland since opening in 2003.

Couples will have plenty of choices when they reach the counter, and the store itself will keep them talking long after they’ve finished off their treats. That’s what keeps daters coming back, according to Cat Daddy.

“It’s an easy conversation starter. There are the tons of stories at Voodoo Doughnuts,” he said. “The weddings, the record label, the kooky doughnuts, the weird decorations, the circus atmosphere, the crazy art. It’s a good icebreaker. A cheap date and an easy atmosphere.”

Shaking Up the Industry With Cotton Candy Sugar, Maple Bacon and Other Unique Doughnuts

These days, Voodoo Doughnut has an international reputation as Portland’s off-the-wall doughnut shop, but back in 2003, Cat Daddy and Tres just wanted to start a business together.

“When we shook hands to do it, we didn’t even know it was going to be a doughnut shop,” Cat Daddy said. “We were in the bar business, and we thought that would naturally happen, but we stumbled upon this idea of doughnuts and realized there had never been a doughnut shop in downtown Portland. We latched onto the idea, and went, ‘Why not doughnuts?’”

From there came the actual doughnut-making process, which Cat Daddy and Tres didn’t know, but as they studied different shops and flavor options, they recognized that most doughnut shops sold the same typical 15 to 20 flavors.

“The doughnut industry was stagnant. There would be those 15 to 20 doughnuts, and that was it,” Cat Daddy recalled. “We started to put crazy stuff on our doughnuts.”

Adding unusual flavors and toppings, like lemonade powder, cotton candy sugar, grape dust, Oreo cookies, and peanut butter, was unheard of 15 years ago. Then Voodoo Doughnut made the decision that changed the food industry — or at least the doughnut industry — forever: putting bacon on a doughnut.

The $5 Date: Doughnuts, Coffee, and a Quarter for the Jukebox

Voodoo Doughnut — and its owners — have a reputation for being a mix of one part punk rock and one part weird. Cat Daddy recalled what he’s heard about Voodoo Doughnut’s staff and clientele. “I hear you have to have tattoos to work here, 15 piercings and all that stuff, but Tres and I are hole-less in Portland,” he said.

Voodoo Doughnut welcomes everyone, and the little shop’s reputation has spread across not only the United States but also the world.

“People say, ‘Do you know how far I came for a Voodoo Doughnut?’ Yesterday was Thailand. He’d made the trek to come all this way,” Tres said. “That’s a lot to live up to.”

Voodoo Doughnut is such a memorable date spot because it offers up tasty food and an out-of-the-ordinary experience — for an affordable price. “It’s a great opportunity for a $5 date,” Cat Daddy said. “Get a couple of doughnuts, a couple of cups of coffee, and have a quarter left over for the jukebox or the pinball machine.”

Tres also mentions that most Voodoo Doughnut locations are near bars — and are open late.

Voodoo Doughnut Founders Kenneth “Cat Daddy” Pogson, left, and Tres Shannon are passionate about what they do and the products they provide.

If you’ve already gone to Voodoo Doughnut with your partner, your 10th doughnut date can be completely different than your first because the shop offers 60 to 70 doughnut varieties and an ever-changing menu.

“We had 100 doughnuts at one point, but it really confused people,” Cat Daddy said. “We pared down the menu to anywhere from 60 to 70. We do have opportunities to create new doughnuts, and we do a charity of the month doughnut. That gives our employees the chance to experiment and come up with new ideas. There are a few that have made the cut, and if they’re a great doughnut, they make it onto the menu.”

If your first date goes really, really well, why not commemorate the experience with a wedding where your love story began? Lots of couples have already made Voodoo Doughnut their Pacific Northwest wedding chapel.

“Our wedding services are 10 minutes or less, and it’s 300 bucks. We get people who just want to do something kooky,” Cat Daddy said. “We marry people dressed up in formalwear, but we’ve also married people dressed in hot dog costumes. We once married two cats during a cat show.”

Instead of a wedding cake, you get doughnuts with a Voodoo Doughnut ceremony.

The basic Voodoo Doughnut wedding lets you bring nine of your closest friends for a dozen doughnuts, coffee for nine, a heart centerpiece, and customized doughnuts for the lucky couple. But some go all out for their doughnut shop affair, with all of the above, a trip to Portland, and a personal tour with Tres and Cat Daddy.

While getting married at a doughnut shop may seem odd, the shop-hosted legal ceremonies are popular: The owners note that more than 500 couples have said their vows at Voodoo Doughnut.

Not Just in Portland Anymore: Voodoo Doughnut is Building a Loyal Worldwide Following

Doughnut love is in the air in Portland, but the shop is quickly expanding to other locations — much to Cat Daddy and Tres’ surprise.

“At first, it was kind of a Portland concept. We knew it was great for Portland, but pretty quickly, we realized this was getting big,” said Cat Daddy. “It’s very humbling. It’s been our job to control growth rather than drive growth.”

In May of 2018, the Voodoo Doughnut in Universal Studios Resort Orlando will open its doors, and the owners have plans to open another store at a still-undisclosed location during the year as well.

Cat Daddy and Tres remain awed by the success of their business and the popularity of the Voodoo Doughnut concept. “We had to watch this baby turn into a rock star,” Cat Daddy said. “When you say ‘Portland’ to people, the first thing they say is that you’ve got to go to that doughnut shop.”