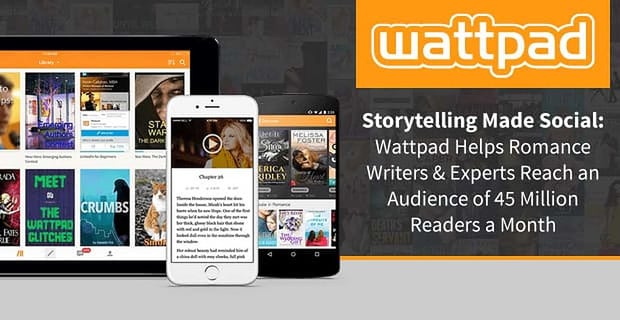 The Short Version: Established in 2006, Wattpad is a free social platform that allows writers to share their stories with a monthly audience of roughly 45 million people — 85% of them being millennials who log more than 15 billion minutes per month. The site has a section dedicated to romance, allowing aspiring romance authors and experts, such as dating coaches and matchmakers, to connect with avid readers. Folks who gain enough traction also have the opportunity to make a living doing what they love through the Wattpad Stars program.

CEO of Wattpad Allen Lau, an avid book lover and traveler, always wanted to be able to use his mobile phone to read on the go. He first came up with the idea in 2002, prior to the rise of social media. Developing this type of experience proved relatively fruitless on a Nokia Candy Bar phone, so it wasn’t until four years later that his dream actually began to take shape.

In 2006, Allen’s friend and former colleague, Ivan Yuen, reached out to him about a project he was working on — a mobile reading app that allowed authors to upload their stories to a website.

“After realizing they had been working on the same idea separately, they knew they were on to something big,” Melissa Nightingale, Head of Creators at Wattpad, said in a recent interview. “Allen met Ivan at the Vancouver International Airport where they jotted down the idea for Wattpad on a napkin in the airport terminal. The rest is history.”

Melissa Nightingale, Head of Creators at Wattpad, told us about how her company has appealed to millennials and integrated reading and writing into social media.

Wattpad has since made an impact on many writers from a diverse range of genres while catering to a wide global demographic. Romance authors are now able to tap into a user base of 45 million monthly readers, who log more than 15 billion minutes each month. This type of readership presents an opportunity not only for romance authors but also for dating coaches, matchmakers, and lifestyle bloggers. Many dating and relationship experts have stories to tell and advice to tell based on their client experiences, and this type of exposure can help them grow their brands while enabling them to reach more people.

“Wattpad’s mission is to transform how the world discovers, creates, and engages with stories,” Melissa said. “We want to connect and inspire billions of storytellers and audiences. We have evolved significantly since launching as a reading/writing app in 2006. Today, we are a global, multiplatform entertainment company.”

The site provides a service for scribes in virtually any genre to post serialized material for audiences everywhere. Most of the users are millennials, who are more likely to be at a stage of life where dating and romance are on their minds.

There’s a hugely popular section dedicated solely to romance stories, and another with tips for romance writers, which includes writing contests and forums. Not only is this a great place for these folks to gain more exposure with their content, but it’s also an excellent place to build a community with like-minded people who share common interests in romantic literature.

Wattpad Stars™ Paves a Pathway to Exposure for Writers

The Wattpad Stars program includes the most successful authors and the biggest influencers on the site. All Wattpad members are welcome to apply to the program.

Acceptance is based on readership and the quality of stories. If you have a strong following and create stories that Wattpad readers are talking about, you have a decent shot at becoming a Wattpad Star.

Wattpad Stars includes some of the most popular talented writers on the platform.

This program helps authors earn money and also gain mass exposure to brands, publishers, and studios. Being a Wattpad Star means you have the opportunity to collaborate with big brands and work on large-scale, story-based campaigns.

You’ll also have even more opportunities to get your work published. Many Wattpad Stars have seen their stories come to life in film and television as well.

Additionally, if you’re a dating expert who doesn’t possess the skillset of a seasoned writer, you can be matched with Wattpad Stars who can craft engaging stories that can help spread the word about your brand.

Weave Your Dating Brand Into Stories With Wattpad Business™

“We believe this future is driven by communities of storytellers and backed by powerful data and insights,” the Wattpad team said.

By using Wattpad Studios, romance writers and dating experts can draw from their own experiences and create stories for other media, and as a result, they have an opportunity to see their stories turned into books, films, and TV shows.

Wattpad Brand Solutions, on the other hand, allows Wattpad to connect dating experts’ brands and other corporate companies like Kraft and General Electric with influential writers. Once these brands find authors who understand their brand voice, they can pay them to subtly weave brand messaging into entertaining stories. It’s becoming an increasingly popular way for brands to market their products or services.

Companies have the opportunity to spread brand awareness through contests like the one Sour Patch Kids used to inspire Valentine’s Day stories.

Wattpad is at the forefront of this new phenomenon, and the folks over at the popular Mondelez candy brand (Sour Patch Kids), for example, have noticed. They’ve begun to take full advantage of Wattpad Business by tapping a new kind of talent known for long-form stories.

The candy brand chose three Wattpad influencers to create a few posts. “When Miss Sweet Meets Mr. Sour” is the story about a high school romance, and another, “Sweet Summer Love,” is about a girl who follows her boyfriend on a rock-n-roll tour. The main characters of the stories are, of course, Sour Patch Kids. Mondelez’s senior associate brand manager, Lauren Fleischer, weighs in and says, “what we’ve seen from teens is the idea that fan fiction is becoming more mainstream.”

Helpful Tips on How to Engage With Readers Through Social Writing

Wattpad provides engagement between a global community of readers and authors, and with an app that allows writing and publishing from anywhere, writers can work from wherever they are. As a result, creators on Wattpad are able to get their work in front of a large, youth-oriented audience who can read and comment on chapters from anywhere.

Wattpad offers strategies for how to best reach these readers and keep them interested. Serialization is one example of a method of reaching new readrs. It allows writers to build up a relationship with their fan base because it gives fans a reason to come back — something to look forward to. Fans and authors can also leave comments, receiving real-time feedback and strengthening their engagement. Additional strategies include making stories stand out by using descriptive tags or creative cover images and sharing stories on social media.

One Wattpad romance story, “Prince With Benefits,” by Wattpad storyteller @gabycabezut has received more than 63 million reads. This user made use of frequent updates and was strategic with her tagging and social media posting. As a result, the user became one of Wattpad’s most influential romance writers and was able to get her story in front of millions.

The Sour Patch Kids serials mentioned above provide another great example of how regular posting, use of clever images and tags, and high social media engagement can all lead to marketing success. Romance authors and dating experts can take advantage of these strategies to spread their message to more readers, and Wattpad provides the ideal avenue to accomplish this.

Expand Your Readership to an Enthusiastic Audience on Wattpad

Allen’s dream of a high-quality mobile app was realized, and millions of millennials have reaped the benefits with what is, in essence, a free social media platform for reading and storytelling.

“Comscore recently placed us in the top 10 apps with the highest concentration of millennials,” Melissa said. “The Wattpad community is about 75 percent female, and the majority of people are under the age of 30.”

Wattpad takes a storytelling angle on social media, giving romance authors and other experts significant online real estate to have their stories, advice, and brands seen and heard.

Once writers gain a large enough following on Wattpad, they have the opportunity to partner with publishers, filmmakers, and international brands.

The service has successfully helped thousands of members from these groups establish themselves and reach a young, enthusiastic audience. As a result, they are being connected with the influencers of our generation. With its existing fan base, Wattpad is providing folks an ideal opportunity to make a living doing what they love.

Adam is a Contributing Editor at DatingAdvice.com, where he writes and edits articles on a wide range of topics. With more than a dozen years of experience in newspapers, Adam works closely with dating experts and industry leaders to ensure readers are always in the know.