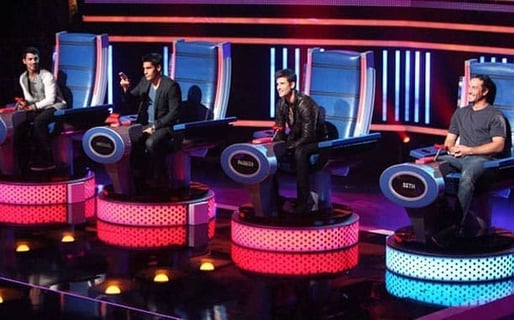 What Does “The Choice” Offer Women?

FOX touts “The Choice” as “featuring the world’s most eligible celebrities competing to find true love among a group of attractive singles . . . they can’t see.” Hosted by Cat Deeley, a.k.a. the hot British model who hosted “So You Think You Can Dance,” “The Choice” is an hour-long dating game show that premiered on June 7 and airs every Thursday night at 9 p.m. EDT.

This is how the show works: four eligible celebrities sit in rotating chairs turned so they can’t see the stage, while potential, non-celebrity love interests come onstage and have less than a minute to convince the guys to “turn around” and choose them as a possible date. If nobody turns around, then the girl goes home. Over the course of three rounds, the contestant pool is paired down until each celebrity has chosen their date for the evening.

“We wanted to put a new spin on the dating game show that gives celebrities THE CHOICE of a lifetime and the chance to prove you really shouldn’t judge a book by its cover,” explained Mike Darnell, President of Alternative Entertainment, Fox Broadcasting Company, on FOX.com.

Many of these “eligible celebrities” are on the B-List (with a few exceptions), but it’s a great way for them to gain exposure while looking for love. All in all, it’s a fun show that’s mindless entertainment. You will in no way become a more intelligent person for watching it, but the banter between the celebrities is pretty hilarious, and it might give you some insight into what men are really looking for in a woman.