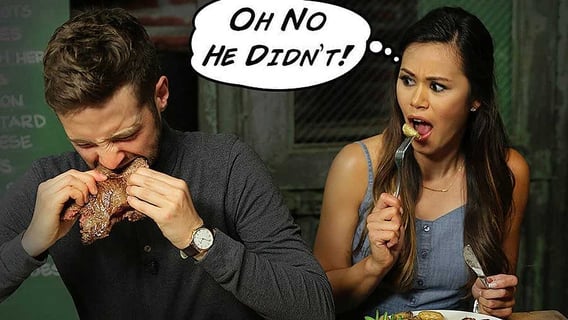 What If My Date Didn’t Meet My Expectations?

Most of us have been on at least one date in our lifetime (but usually more) that went very differently than how we thought it would go.

The first time I ever tried online dating, I quickly began exchanging messages with a man who seemed interesting and smart. We flirted back and forth by email like crazy, and he always had a witty response to whatever remarks I sent his way.

We seemed to have everything in common, and although it was hard to see his face in his profile picture, he looked handsome enough to give it a shot.

When we finally met, it was a completely different story

For one thing, he looked nothing like his picture, and although I had gone into the situation knowing it didn’t matter what he looked like if there was chemistry, I was disappointed to see him walk in with shoulders slouched and his head hanging low like Eeyore from “Winnie the Pooh.”

The man who had been standing up tall and confident in the profile picture was nowhere to be seen. What’s worse is he talked in a very slow, monotone voice and mumbled so much that he was difficult to understand. Where was the lively, witty man I had been emailing with?

When I brought up a topic we had flirted about while messaging each other, he looked at me confused and then finally said, “I’m sorry. I don’t really remember most of what I say. I should probably let you know that I’m on a lot of medication for [insert list of psychiatric illnesses here].”

“Where was the lively, witty man I had been emailing with?”

I don’t remember exactly how I got out of that one, but I did as gracefully and quickly as possible.

Not that there’s anything wrong with being on medication for mental illnesses. However, if someone is unable to carry on a coherent conversation, they certainly are not ready to have a relationship.

Thus ended my first foray into the online dating world, where misrepresenting yourself runs rampant.

This experience is not exclusive to online dating, though

Pretty much anyone who has been on more than a few dates has had at least one experience that seemed to go very, very differently than how they thought it would.

And, unfortunately, the majority of dates people go on are bad ones.

Pretty much anyone who has been on more than a few dates has had at least one experience that seemed to go differently than how they thought it would.

Sometimes they do weird or embarrassing things (like chewing out the waiter at dinner). Sometimes it’s just painfully obvious that there’s no chemistry or connection between you two, but it would be rude not to finish out the night anyway. So you end up suffering through the awkwardness all the way until your last bite of dessert.

Luckily, it doesn’t have to be that way. While it’s impossible to avoid ever going on a bad date again, there are a few simple shifts you can make in how you approach dating that will put your bad dates in the small minority and make most of your dates enjoyable and worthwhile experiences.

When it comes to dating, my philosophy is quality over quantity.

The attitude of “just getting out there” can be counterproductive to your dating success, especially if you are looking for something more meaningful than a dinner that may or may not even include enjoyable conversation.

Unless you have a lot of time you’d like to waste, then don’t focus on getting as many dates as possible, playing the “numbers game” until you get a good one. Instead, set the goal to go on as many good dates as possible.

When something doesn’t meet our expectations, it means what we thought was going to happen, or what should have happened, ended up being different than what actually happened in reality.

The attitude of “just getting out there” can be counterproductive to your dating success.

One of the most valuable lessons I learned from one of my mentors is the distinction between an expectation and an agreement. An expectation is assumed, and often unspoken, whereas an agreement is reached after communication on both sides.

For example, a common expectation for a woman to have (even in 2015) is that her date will pick up the tab. Many women even get offended if the man they’re on a date with asks her to pay for her own food.

But unless a contract was signed, or he explicitly agreed to pay for dinner ahead of time, then her expectation is hers and doesn’t really have anything to do with him or what his expectations are about how the date should go.

By the way, this is not to say that I don’t think women shouldn’t enjoy receiving when a man offers to pick up the tab. Doing so is a great way to help make the date feel more romantic.

However, showing up with the expectation that he should pay, or that “everyone knows the man pays,” is going to cause problems, especially if he didn’t get the same memo about that.

When you show up with your own ideas about how things should go, then statistically there’s a good chance your date will disappoint you because it’s very unlikely that someone else, who has their own personality and belief system, would do exactly what you had in mind without any communication about it.

Agreements are a much cleaner, more emotionally mature way to handle most situations, but it’s also pretty unrealistic in today’s dating climate to sit down and draw up an agreement with all of your dates ahead of time, detailing out exactly how you want things to go, to ensure that everyone has a safe and fun time.

So what to do instead?

Instead of thinking about what you expect from your dates, ask yourself “What kind of person do I want to go on a date with?”

One of my favorite tools for clear thinking is the concept of inevitability thinking, which is basically figuring what to do in order to make your desired outcome inevitable.

We might do this kind of planning to help our daily lives run more smoothly, but most people don’t realize that this concept can also be applied to dating. What kind of people do you need to be going on dates with to ensure that your dates will inevitably go well?

If you’re on a first date with someone and it’s not going well, it probably means you didn’t spend enough time getting to know him before the date. Whether online or in person, spend more time flirting with someone before agreeing to a date.

Instead of thinking about what you expect from your dates, ask yourself “What kind of person do I want to go on a date with?”

Then only date the people who you really seem to have chemistry with. This way, most of your first dates — as well as the dates that follow — will be fun because you will already know each other well enough to know that you enjoy each others’ company.

Dates are a great way to get to know someone even better once you already know that you get along with each other. They don’t work as well as a way to determine whether or not you even like being around someone for more than five minutes!

For example, what if he does ask you to pay for your own dinner? How does that make you feel? Does this surprise you? Offend you? Relieve you of feeling guilty about someone else buying you dinner? Make you feel proud that he sees you as an equal?

These feelings are also a clue about how you want your future dates to go, which can help you make better choices about who to go on a date with in the future.

For example, if it turns out that you really like having a man pay for you on a date, then you probably don’t want to say yes to the man who insisted that you pay for your own drink while flirting with you at the bar.

What to do in the future

Usually this helps us realize where we can do a better job of sussing him out and setting things up ahead of time (remember inevitability thinking). One of the keys to dating success is enjoying the good dates and learning from the miserable ones.

If your expectations were realistic based on the circumstances and you really were blindsided by his actions on the date, then take note of this as well, as this might be a red flag that he is the kind of guy to make himself out to be something he’s not.

Finally, remember to express gratitude for what you do like about your date — this will inspire him to want to take you out on another one!

Would You Rather Date Like Jenny or Melissa McCarthy?

5 (New) Things You Learn About Yourself While Dating