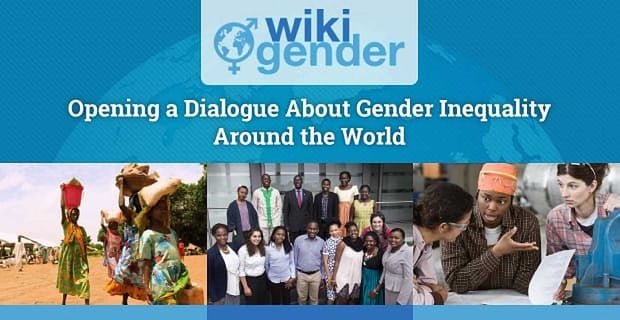 Wikigender: Opening a Dialogue About Gender Inequality Around the World — From Civil Liberties to Sexting

The Short Version: While it’s tempting to believe that society has evolved into a utopian state of equality and peace, to do so ignores the complexity of the world at large. Wikigender, an information resource devoted to raising awareness about gender inequality, aims to spark discussion and change social norms through their in-depth content. This website collects information from 165 countries about inequality, including human trafficking, suppressed civil liberties, and violence toward women. Wikigender follows news stories, hosts forum debates, lists events, and publishes research to advocate for women’s empowerment and protection. Wikigender covers key dating issues such as rape culture, sexting, and developments in the role of women in society.

Online dating often comes with mismatched expectations for men and women. In my experience, this can sometimes cause frustration for both parties. At the outset of one first date, this guy I’d never met in person texted me from his truck: “Just parked. Looks like the wait is too long. I can drive us to another restaurant.”

There’s really no polite way to say “I’m worried that you’re a murderer,” so I just went with a straightforward, “That’s not happening.”

Only then, it seems, did it dawn on him how sketchy his offer sounded. Needless to say, there was no second date with that guy.

On first dates with total strangers, men and women tend to have different ideas of what a worst-case scenario looks like. While my date worried about waiting 45 minutes before he could eat, I worried about date rape.

It’s not altogether shocking that some men don’t think of a woman’s safety concerns when making plans. Nice guys know their own intentions, and so can feel pretty confident that first dates hold no danger whatsoever. But nice girls don’t have the luxury of being unaware about the potential for sexual assault.

In the U.S., women are six times as likely as men to experience intimate partner violence, and 91% of the victims of reported rape and sexual assault are female while only 9% are male. For most men, such harsh realities don’t (and probably won’t) affect them personally, so it’s easy to be unaware of it.

In 2008 on International Women’s Day (March 7), the Organization for Economic Co-Operation and Development (OECD) launched Wikigender to raise awareness and inspire debate about gender disparities.

Wikigender encourages an informed debate on gender inequality in an open and academic forum.

In an intuitive interface, French and English speakers can interact and learn from one another. On the site, many fervent individuals endeavor to change social norms and bring about true gender equality to every corner of the globe and in every aspect of life.

The Impact of Current Dating Culture on Women

There’s no denying that dating has changed drastically over the years, especially with the advent of better technology. The rise of online dating has streamlined an individual’s ability to flirt, but it also raises new concerns for the men and women who pioneer this new form of socializing.

It can be hard to keep up with such an evolving topic, but Wikigender stays focused on the key issues at hand. The site tracks the latest developments in dating that affect gender equality.

Their article on sexting’s impact on teenagers is particularly popular, with over 3,000 views. The section explains how sometimes an innocent form of flirting can turn into cyberbullying or pornography charges. Women choosing to sext may feel that it’s sexually empowering, but can end up victimized all the same.

A provocative read on a controversial subject, this article lays bare the legal and social ramifications of men and women sending each other sexually explicit pictures.

On this inclusive platform, equality-minded individuals speak out for the safety, empowerment, and general rights of women.

Online dating, on its surface, seems like an equal opportunity for both genders, assuming the platform has a 50-50 split gender makeup. However, dating websites and apps may actually be facilitating inequities in some cases. In a behavioral study, scholars reported that men are more active than women on online dating platforms: “They are less choosy about partners and more likely to be motivated by short-term romantic pleasure.” Men were also more likely to initiate conversations and to lie about relationship or career aspirations.

By quantifying online interactions, some analysts have found great disparities in dating experiences. For instance, in terms of response rates, white men seem to be in relatively high demand on OkCupid, while black women tend to get the lowest response rates to their messages — even though they’re the female demogrpahic most likely to respond to messages.

In 2012, Jon Millward, a freelance data journalist, created 10 dummy dating profiles and conducted a four-month experiment in the U.S. and U.K. The profiles were as identical as he could make them (with slight variances in the usernames), and what he found was that messages tend to flow in one direction — toward the women.

“I sympathize with any woman who has struggled to find any diamonds amongst the rough myriad of messages she is bombarded with each and every day.” — Jon Millward, freelance journalist

Taken as a whole, men take on the role of the aggressor, and women passively wait for their knight in shining armor. Of course, there are dating innovators combating this inequality — most notably Bumble, an app where women are required to initiate conversation.

Admittedly, the imbalance of response rates is unfair for both genders, stacking the odds against men competing with each other for attention and burying women under hundreds of unsolicited come-ons per week. Jon summarizes his experiment by saying that while there are differences, that doesn’t mean there’s inequality or that either gender has an inherent disadvantage in online dating. I say, tell that to black women.

With statistics, media stories, and academic citations, Wikigender thoughtfully dwells on the contributing factors leading to gender inequality and the measures that can combat it. A whole section of the site is devoted to violence against women.

Deftly, the site underscores safety issues for women. From Asian Rape Concerns to Conjugal Violence, Wikigender doesn’t shy away from this subject but outlines, in no uncertain terms, the harsh realities facing women around the world.

Wikigender delves into the societal, psychological, and physical ramifications of domestic violence.

This is a necessary function because men can be woefully oblivious to women’s safety concerns. One night I was texting my boyfriend about how I was hankering for a burger — there’s a fast-food place around the corner from my apartment — but I’d loaned my car to my brother. “If it were me,” he said, “I’d walk.”

Maybe you don’t know the facts about the dangers that exist for women in the world. Maybe you have a boyfriend you’d like to educate. Either way, Wikigender compiles articles in a compelling and in-depth look at rape culture and gendered violence.

Using the site’s “Violence Against Women” tag can quickly narrow your search for the latest research and news on this subject. While it may be disturbing to learn about Bride Burning, it’s an important reminder of the ongoing global struggle for basic human protections for women.

An online community of like-minded individuals, Wikigender currently has 178 active members — and the membership is always growing. You have to register as a member to join the forums and add your personal experience or expertise to the conversation. All you need is an email, username, and bio to register. The site also organizes regular online discussions that anyone (even non-registered users) can take part in.

Wikigender University is an educational program launched in 2010.

If you’ve got a question about dating or other gendered topics, these community forums can be a good place to talk out your concerns. The support of an egalitarian community can enrich your opinions and empower your voice.

Additionally, college students can get engaged in the dialogue on gender-themed topics through the Wikigender University Programme, which shares information and challenges perceptions about gender.

Experts present findings and exchange ideas on the state of gender inequality in universities around the world.

Wikigender also promotes notable participatory events such as conferences and summits that deal with women’s issues. The site offers upcoming event listings as a way for you to get involved as an attendant, speaker, or volunteer.

The primary goal of Wikigender, a glossary of gender-related terms and issues, is educating the public about gender inequality. On the Media Review page, the site assembles studies and articles on gender issues from noteworthy news outlets including the Washington Post, The Guardian, and USA Today.

These articles often span any number of topics from teen pregnancy to wage gaps. If a U.K. study reveals that teen pregnancy rates have reached historic lows in England, Wikigender wants their audience to know about it. Any time gender is referenced significantly in the media, the site plucks that article up and posts it in a frequently updated list.

Whether you want to explore gender issues by country or take a broader approach by looking up issues facing today’s youth — Wikigendercan give you the facts to gain a firm understanding of where we stand. Information is easy to find on this centralized resource, so learning more about sex workers, family code, or any number of topics becomes much simpler.

Go to Wikigender to Follow the Latest in Gender Inequality

My friends and I, before going on a first date with someone we met online, always broadcast where we’re going and who we’re going with. “If you don’t hear from me tonight,” I remember one text reading, “this guy (she gave his name and phone number) murdered me. Please avenge me.”

Founded in 2008, Wikigender is a global project to improve the discussion about gender equality.

Despite the light-hearted, just-in-case tone, this isn’t really a laughing matter. Women walk around with a grim hypothetical hanging over their heads, while men, by and large, remain safely unaware of these issues.

Wikigender combats that lack of information with statistics, forums, and news stories. The site is an unmatched resource for anyone looking to learn. Through increased awareness, these impassioned scholars and experts nudge society toward true equality.

All daters should be conscientious of the challenges faced by men and women in modern society because this is an issue that affects people of all genders, races, religions, and economic statuses. As Wikigender so thoroughly documents, gender inequality is happening all around the world, even today, so read on, join the discussion, and be aware.