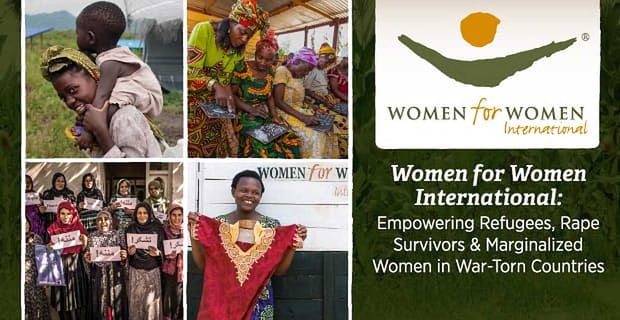 The Short Version: In 1993, Women for Women International (WfWI) established a worldwide sisterhood to support marginalized voices in poverty-stricken and war-torn corners of the world. Today the nonprofit runs educational programs tailored to refugees, rape survivors, and the ultra-poor in eight countries impacted by war and conflict. WfWI’s year-long training offers health education, a monthly stipend, and vocational skill-building workshops to empower women to stand on their own two feet and speak out for gender equality. Over 422,000 sponsors in 200+ countries have donated to this grassroots movement and helped more than 463,000 women and 15,000 men become feminist leaders in their communities. Building long-lasting change, Women for Women International gives women the resources to overcome societal oppression and achieve financial security for themselves and their families. On the website, you can also buy a gift for an underprivileged woman abroad (like a gardening toolkit) in the name of your loved one. This could make a touching Mother’s Day gift or birthday present. Such acts of charity bring people closer together and spread love around the world.

In the Democratic Republic of the Congo, violence and rape was used as a weapon of war. This left many lives in shambles. Solange lost her husband and three of her children to the fighting, she was raped four times by armed men, and she became pregnant with her rapist’s child — but she never gave up.

She named her newborn daughter Esperanza, which means “hope,” and left her village to resettle in the city of Bukavu, where she became an inspiring figure for other rape survivors. “You still have life,” she’s told other traumatized women. “You still have value.”

Solange signed up for Women for Women International to get a monthly stipend and job training so she could support her family. The one-year program taught her sustainable farming skills and gave her the means to rebuild her life. “We got a lot of training and useful information,” she said. “For instance, [we learned] how to live with others in the community, what a balanced diet is, how to feed our children.”

Zainab Salbi, an Iraqi-American humanitarian and author, founded Women for Women International in 1993 to create sister-to-sister connections between sponsors in the U.S. and survivors of war in Bosnia and Herzegovina. Originally, the program enrolled eight women in vocational training. Today the nonprofit organization has empowered nearly half a million women around the world.

Pushing gender equality, Women for Women runs supportive programs for men and women in developing countries, including Afghanistan, Bosnia, Nigeria, the Democratic Republic of the Congo, Rwanda, Kurdistan Region of Iraq, and Kosovo. The organization will be re-opening an office in northern Iraq in the coming months to better serve Syrian and Yazidi refugees. As they continue growing their programs, WfWI hopes to expand to other areas where help is needed.

Noorjahan Akbar, Communications and External Relations Officer, characterized WfWI’s work as driven by the needs of the local women the organization serves. Part of the reason the nonprofit started offering training for men, for example, was because Nigerian participants said the best way to make change and improve the lives for the women in their country was by educating and allying with men.

“We don’t go into these communities telling women how to live their lives,” Noorjahan said. “Instead we offer our support as allies and really listen to the women there. A big part of our work is highlighting these local voices so they feel empowered to make change on their own.”

Women for Women International seeks to make grassroots changes to war-torn communities by creating women-only spaces for support, networking, and rebuilding. In a comprehensive and multi-faceted program, groups of 25 women learn vocational skills, receive a monthly stipend of $10, and become advocates for women’s rights. After graduating the program, women feel more confident participating in business, handling finances, and supporting their families.

The WfWI training programs tailor their services to the needs of the local communities. From basket weaving in Rwanda to embroidery in Afghanistan, Women for Women International teaches valuable skills for the region it is in. The focus is on empowering local women who have been impacted by war or extreme poverty.

Through the power of sisterhood, the nonprofit takes women who are isolated, poor, or uneducated and gives them the means to start their own businesses and become leaders in their communities.

“The women we work with not only become economically empowered but also learn about their rights and family planning. We see increases in knowledge across the board for women coming out of our programs,” Noorjahan told us. “We really try to impact every aspect of their lives.”

Over the past two decades, Women for Women International has worked toward equality around the globe through educative programs for marginalized women. The organization teaches people about the importance of women’s rights and family planning to build strong, sustainable communities.

“Before joining our program, 30% of women used family planning, and after the program, 87% report using it,” Noorjahan said. “Before our program, 10% of the women we work with say they talk to other women about their rights. After our program, 89% say they do so.”

By working with refugees, rape survivors, and women impacted by war and poverty, Women for Women International makes changes from the ground up. The nonprofit encourages women to take control of their lives and destinies because the team believes stronger women build stronger countries.

No single person can make societal change on their own. Activists must rally communities around their cause to make an impact on important issues like gender equality. It takes a lot of people working hard to restructure family relations, combat economic disadvantages, and counter harmful gender norms.

Women for Women wouldn’t be able to uplift so many marginalized women if not for the backing of generous sponsors in 203 countries. More than 422,000 donors have given their support to the nonprofit and bolstered the cause of equality. About 45% of the women who receive these donations reported using the money to build up their savings so they have the means to support themselves in hard times.

“Communal wealth means communal power,” Noorjahan said. “If you take the time to invest in another woman, it will make the world better for all of us.”

The WfWI program matches donors with their sisters who are living in poverty around the world.

A monthly gift of just $35 has the power to change a woman’s life for the better and sponsor her journey toward complete self-reliance. Once signed up, you’ll receive a welcome kit with information about the woman you’re sponsoring, including a photograph. You can also use email communications to keep up with her progress and send her encouraging messages while she’s in the program.

About 60% of Women for Women International’s funding comes from average contributors putting in a few dollars a month to make a difference.

On the website, you can also buy a gift for an underprivileged woman abroad (like a gardening toolkit) in the name of your loved one. This could make a touching Mother’s Day gift or birthday present. Such acts of charity bring people closer together and spread love around the world.

Women for Women International has more than 400 staff members and trainers in offices across the globe. All trainers are locals employed by the nonprofit to pass on their skills and life experiences to others in their own communities.

Women of all education levels can sign up for WfWI’s training programs. In 2015, 39% of participants had no formal education, and 42% had only attended primary school. Through vocational training and advocacy work, the nonprofit has helped over 463,000 women in war-torn countries.

“We create women-only spaces so women can get out of the house and connect with one another,” Noorjahan said. “Many women say that’s their favorite part of the program: building social support so they’re no longer isolated.”

In 2014, Hosai Bayani was one of three women serving on the Provincial Council in Parwan, Afghanistan. Photo credit: Rada Akbar.

Within two weeks of enrolling in the program, Hosai Bayani became a trainer for the WfWI in Afghanistan. She loved engaging with members of her community and went on to hold elected office as a Provincial Council Member in Parwan in 2014. She brought her unique perspective as a woman to the 15-person council.

“Women encouraged me to apply for the provincial council,” she said. “I have the support of the women in the program and their families. All the women trust me and know me.”

As a community leader, Hosai seeks to improve health care for women and raise awareness about women’s issues throughout Afghanistan.

An ally in this cause is Ghulam Rabi, a local leader in Nangarhar, Afghanistan, who participated in Women for Women International’s men’s training program in 2014. Twice a week, he joined a group of 50 men to discuss women’s rights in a religious and social context. “We didn’t know about these verses and all the rights that women have in the Holy Book,” Ghulam said.

After graduating from the program, Ghulam adopted a new perspective on how families should treat wives and daughters. For instance, he has gone against conservative religious scholars and advises against marrying daughters off at a young age to make money for the family. “If you are going to give your daughter to someone she doesn’t know, she is going to spend all of her life with him,” Ghulam pointed out. “It is better to ask women about their choice and their decision about these things.”

Since 2001, Women for Women International has trained more than 15,000 men to overturn harmful gender norms in society and advocate on behalf of women’s rights. The training changed Ghulam’s attitude for the better and made him a strong ally in the struggle for true equality in family and work life.

In her small, rural village, Solange was isolated after she was attacked by violent rebels. She came to Bukavu looking to turn her life around, and Women for Women International empowered her to make a fresh start. Today Solange has a steady income and can send her children to school thanks to the backing she received in the WfWI’s year-long program in the DRC.

Women for Women International offers women resources to recover from poverty and trauma.

The intensive training gives refugees and rape victims valuable knowledge and skills. Women for Women International nurtures new leaders who can make positive changes in their own lives and the world. From health concerns to women’s rights, the organization fosters greater awareness of the issues hampering a woman’s ability to charter her own path in life.

Grassroots efforts have impacted the lives of nearly half a million women residing in the most dangerous and poverty-stricken areas of the world. Women for Women International helps underprivileged women gain vocational skills, save money for emergencies, speak out for the rights of women, and become pillars of strength in their communities.

“We’re really proud of our work and its impact on women,” said Noorjahan. “On average, when women join our program they have an income of $0.34 dollars a day. That increases to $1.07 after graduation from our training program.”