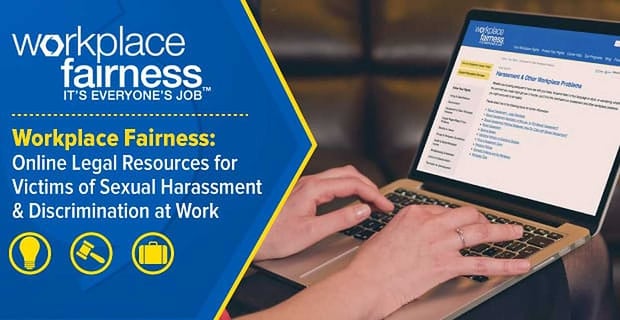 The Short Version: Sexual harassment and discrimination in the workplace put the integrity of companies in jeopardy and place workers in compromising positions. When issues arise at their jobs, many employees feel powerless to defend themselves. To even the odds, the legal experts at Workplace Fairness empower American workers to know the laws and enforce their rights. The nonprofit organization publishes free and up-to-date information about hiring, employment discrimination, whistleblowing and retaliation, harassment, and other aspects of work life. It’s the most comprehensive online resource about employment law in the US. If you’re wondering how to deal with unwanted sexual advances in the workplace or what the law says about gender or sexual orientation discrimination, you can look up any work-related topic and learn what laws offer you protection. Workplace Fairness answers important questions, like “Can I be treated differently because I am unmarried and pregnant?,”so workers are prepared to stand up for themselves and take appropriate actions to deal with unlawful and unjust situations at work.

Sometimes a dream job becomes a nightmare faster than you can say “hostile work environment.” Or, in Susan Fowler’s case, faster than her co-worker could say, “want a three-way?”

Susan had been working as an engineer for Uber for only a couple weeks when her superior started making unwanted advances on her. He was in an open relationship, he told Susan via chat messages at work, and looking for trouble. Susan took a screenshot of the inappropriate conversation and reported it to human resources. Problem solved, right?

Wrong. She was told her harasser was considered a high-performer, so he would only get a stern warning. Moreover, Uber pressured her into changing teams and switching from her specialized field and warned her that if she stayed, she would get a poor performance review from her harasser, and it wouldn’t be considered retribution.

“Every time something ridiculous happened, every time a sexist email was sent, I’d sent (sic) a short report to HR just to keep a record going.” — Susan Fowler in her blog

Even after changing teams, Susan was unable to excel at her work because of what she described as political games, bureaucratic deceptions, and ever-present sexist behavior at Uber. She submitted numerous complaints, but that didn’t remedy the situation. Susan wrote in her blog that an HR rep actually reprimanded her, saying she was the common denominator in her complaints so she was the problem.

It all culminated when her manager told her she would be fired if she reported her superiors to HR again. She told him that was illegal. He insisted it wasn’t. She reported the conversation to HR. The rep agreed it was illegal but took no action because her manager was, again, a high performer. A week later, Susan accepted a job at another company. She’d had enough.

Susan’s struggles shine a light on women’s issues and diversity in male-dominated work environments. However, Uber is not the only company accused of tolerating sexist behavior or sexual harassment in the workplace. For employers, it’s much easier to sweep such issues under the rug than deal with a rampant problem in the American work culture.

As many as 70% of women and 45% of men have experienced a form of sexual harassment in the workplace, according to Amy Blackstone, a sociologist at the University of Maine. This is not harmless flirting, and it’s not just guys being guys. Sexual harassment, which is defined as unwanted sexual advances or sexual conduct, is a serious issue with many psychological and health implications for the people involved. Victims of sexual harassment can experience emotional distress, depression, sleep problems, elevated blood pressure, and even PTSD.

To help you understand what sexual harassment entails and how to fight against it, Workplace Fairness provides detailed resources about what the law requires of employers in dealing with workplace harassment. Its sexual harassment section is a thorough resource for anyone facing inappropriate conduct at work.

Workplace Fairness educates employees about their rights so they are less vulnerable to abuse.

The online resources at Workplace Fairness cover a range of topics involving employment law — from proper hiring procedures to why unions are important. Since 1994, the nonprofit organization has endeavored to inform workers across the United States about their rights.

“Our main mission is to educate and inform workers,” said Wayne Outten, Co-Founder of Workplace Fairness. “All of us care about promoting the rights of workers and empowering them to address any situation in the workplace.”

If you’re being discriminated at work based on gender, sexual orientation, or a pregnancy, Workplace Fairness can help you understand what the law says about workers in your position and give you clear advice on how to move forward.

Founded in 1994 by Lawyers to Promote & Enforce Workers’ Rights

More than 20 years ago, Wayne Outten banded together with a small team of employment lawyers to create a resource for their clients. They formed the National Employee Rights Institute (NERI and later renamed Workplace Fairness) as a nonprofit entity advocating on behalf of employees in the US.

NERI published books and pamphlets detailing the complexities of employment law and empowering victims of illegal harassment or discrimination to take action. When the internet began booming some years later, the team shifted gears and built a comprehensive website to distribute that same legal information to a much larger audience.

The team of lawyers seeks to make legal knowledge more accessible to those who need it most — employees vulnerable to hostile work environments.

Today the website sees over 4 million hits in a year and continues growing its online resources to be as comprehensive and up to date as possible.

“It was started by lawyers who wanted to educate the employees they represented,” Wayne explained. You can help these altruistic lawyers by donating to their cause. It takes an enormous amount of resources to produce expert legal information for free, so Workplace Fairness is grateful for the support of small donors across the country.

Empowering Employees to Learn About the Law & Take Action

Sexual harassment is a prevalent issue in the workplace, especially as more women decide to have careers and climb the ranks. Many of my friends have told stories about sexist comments and inappropriate behavior at work. Though they work in various industries, from accounting to engineering, they all decided not to report the issue. “It’s not worth making waves,” one friend told me.

“Many employees are afraid to speak up for fear of retaliation, and they just want the harassment to stop,” said Wayne. “They need someone experienced with the law to help them figure out the best way to proceed.”

Knowing the law is an important first step to dealing with troubling work situations. The Know Your Rights section on the Workplace Fairness website outlines hiring, discrimination, harassment, benefits, workplace injuries, whistleblowing, unions, termination, and other work-related topics for the benefit of employees in the US.

Workplace Fairness clarifies what sexual harassment at work means and what workers can do to remedy a bad situation.

Once you understand the problem, you can figure out what your options are to address the problem and seek legal counsel if necessary. The Protect Your Rights section offers practical guidance to assess if you need a lawyer and start building your case.

Workplace Fairness is a popular resource for workers nationwide. Whether you’re experiencing domestic violence or gender identity discrimination, the website provides clear and reliable explanations about what you can expect from your employer according to the law.

Advocating on Behalf of the Marginalized in the Blog & Newsletter

The team at Workplace Fairness works passionately to provide in-depth and helpful resources for workers across the United States. Along those lines, Today’s Workplace blog features relevant content about employment rights and recent developments in laws affecting workers.

The Senior Advisor of Workplace Fairness, Paula Brantner, and other legal experts write articles focused on disseminating useful legal and political information about fairness in the workplace. Since 2003, the blog has tackled complicated issues from a worker-friendly perspective so readers can better understand, protect, and reinforce workers’ rights.

“Workers who are underpaid are all too often exploited and abused in other ways — after all, their employers know they’re vulnerable and need the paycheck.” — Laura Clawson in a Today’s Workplace blog post about sexual harassment

The blog discusses the fight for equal pay, protections for LGBT workers, and other salient issues confronting today’s working population. It’s a clear, accessible place to learn more about workplace challenges and the importance of unions to organize and empower workers.

You can sign up to the nonprofit’s e-newsletter to get the latest in employment law and join the conversation about prevailing issues in the workplace.

Many female employees left Uber in reaction to what Susan characterizes as organizational chaos and institutional sexism. According to her blog, “When I joined Uber, the organization I was part of was over 25% women. By the time I was trying to transfer to another [engineering] organization, this number had dropped down to less than 6%.” On her last day at Uber, that number had dropped to 3%.

Issues in the workplace negatively impact companies just as much as employees, so it’s in everyone’s best interest to protect the rights of workers. Workplace Fairness defends employees, like Susan, who want to do the right thing and stand up for themselves at work. You can check out the site’s exhaustive resources to help you deal with hostile work environments by letting the legal system work for you.

Whether you’re worried your pregnancy will hurt your standing at your job or concerned about unwanted sexual advances by a superior, Workplace Fairness can provide you with practical advice from legal experts on the best way to proceed.

“We’re a bunch of do-gooders, basically,” Wayne said with a smile. “Workplace Fairness is run, primarily, by lawyers who represent employees. We provide comprehensive and up-to-date information about workers’ rights written in plain English for you.”