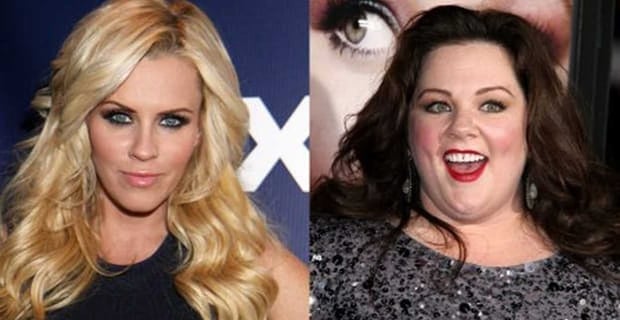 Would You Rather Date Like Jenny or Melissa McCarthy?

Illinois natives and first cousins Jenny and Melissa McCarthy (yes, they are cousins!) entered Hollywood from opposite sides of the spectrum.

Jenny started out by becoming a famous Playboy model and hosting the TV game show “Singled Out” on MTV.

Melissa was an unknown actress until her big break came as a brusque and overzealous bridesmaid in “Bridesmaids,” along with her success on the TV show “Mike and Molly.”

In dating, people often assume someone who is attractive and thin would always be asked out left and right.

This is not always the case.

Everyone assumes Melissa, who’s known for her funny roles more than her figure, must have a harder time when it comes to men. However, it’s Jenny who is divorced and currently single while Melissa has a husband and two kids.

For most people on the surface, it would seem if you had to place a bet on who is alone on Saturday nights, it wouldn’t be Jenny.

“Love is available for anyone

who truly makes the effort.”

What should this lesson teach about dating?

Next time you see that cute guy, go up to him and start a conversation! Don’t assume he isn’t available if he is attractive.

2. Be confident, even if you’ve had bad luck in the past.

Every day is a new day. Even if you are older, you are now wiser.

3. Be able to accept rejection as a part of life, not always a personal attack on you.

If someone turns you down or doesn’t respond to your online ad, it doesn’t always mean it’s about you. Sometimes things come down to timing.

So where did Melissa meet her husband?

She was at a comedy workshop.

Putting yourself out there and looking at places outside of singles events is always key to meeting potential people who may be your match.

While these women are both successful and funny, both have had their struggles with career, looks and things everyday people deal with.

Life is a series of ups and downs, but ultimately love is available for anyone who truly makes the effort!

Cracking the “You Complete Me” Myth