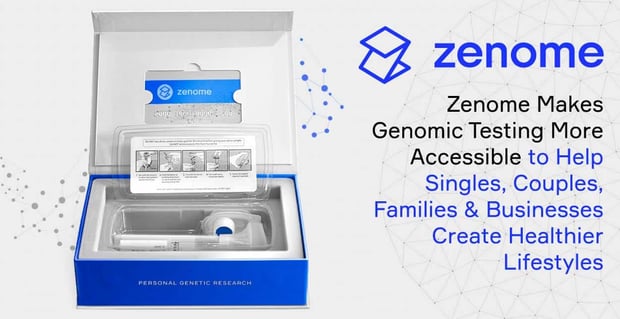 The Short Version: Zenome believes that everyone should have their genes sequenced, and the company is making that technology a reality for more people by offering them affordable testing and cryptocurrency rewards when they share their results. Genetic testing can help determine a person’s chance of developing or passing on a genetic disorder and help individuals, couples, and families make corresponding health and lifestyle modifications. By selling genetic information to third parties, consumers can help ensure that the products of tomorrow are better suited to people of all backgrounds.

The British breakfast spread Marmite is what some might call an acquired taste. And rarely do people have a neutral opinion on the product. They either love or hate it.

Global consumer goods manufacturer Unilever wanted to see whether Marmite’s fans and critics were genetically predisposed to their attitudes toward the savory spread. So it partnered with Zenome, a genetic data mapping company, to devise a test.

“They gave hundreds of people samples of Marmite paste,” said Zenome Law Advisor Vadim Pushkarev. “The testing process proved that certain genetic traits were responsible for how the person responded to the paste.”

With this strong correlation between genes and food product preferences, Unilever developed a different recipe for Marmite that even appealed to those who didn’t like the original spread.

That sort of genetic testing has many implications for both companies and consumers. Through the testing, companies can identify markets genetically predisposed to enjoy certain products, including food and lotions.

Zenome can help people identify health risks or whether they could pass on a disease to their children.

Consumers, in turn, can learn how their genes might make them react to specific medications or substances. Couples can even unearth insights into how their genetic compatibility could manifest later in interpersonal relationships.

Zenome suggests genetic testing for couples for many reasons. If they know what diseases or health concerns they might develop, they can modify their lifestyles. For example, if a husband is more likely to develop heart disease, he and his wife could give up red meat and exercise more regularly.

Further, if a couple were considering having children, they could see what types of genetic conditions their kids could develop.

“People who have genomic testing can be more responsible. It’s important to bring people this level of awareness and balance, so they can be more motivated to think about their health, nutrition, and even their choice in a partner,” said Vadim.

Over the last 15-plus years, the price for genomic sequencing has dropped dramatically. In 2002, sequencing a single person’s genome cost $100 million. But, by 2017, that number had decreased to a little over $1,000. Genetic tests that don’t sequence a person’s entire genome cost even less.

Zenome also wants to leverage that affordability to assist researchers who could benefit from having more genetic testing data.

“Zenome provides people with the opportunity to get genomic testing in a space that’s affordable. At the same time, they can also provide genomic researchers with new understanding,” Vadim says.

Vadim is quite familiar with the process because, while he works for the company, he is also a client.

Zenome Law Advisor Vadim Pushkarev spoke with us about the company’s goal to revolutionize genetic testing and data sharing.

“We downloaded my raw genetic file. The team analyzed my genomic data using their algorithms and mathematical platforms, and it was very interesting in the sense of learning about my health,” he said.

In addition to the benefits of genetic testing for consumers, companies can also use that data to improve their products. In the pharmaceutical industry, for example, genetic researchers are aiming to build personalized medicine. Some medications don’t work for specific individuals based on their genetic traits, so genetic testing could provide more information on why that happens.

In projects like the one Zenome and Unilever worked on together, companies can also create products that suit different consumers. In the cosmetology industry, genetic testing could suggest that consumers with particular traits might be predisposed to dislike a particular fragrance. Then, the company could modify an existing formula to attract a different audience.

“Testing helps in building new products that will be suited for people with different traits. And it can substantially kick-start new products,” said Vadim.

As the price for genome sequencing has dropped, the potential for its use in multiple areas has increased. What hasn’t kept up, however, is the repository of collected genetic information.

So Zenome plans to allow consumers to upload their genetic data to an anonymous database where researchers and companies can purchase it. When an entity buys that information, Zenome will pay users in cryptocurrency.

“We’ll soon offer payments for genomic testing. It will be a chance to test the actual usage of cryptocurrency in this sphere,” Vadim tells us.

Zenome decided to pay users in cryptocurrency because of its inherent privacy. In sharing and compiling genetic data, cryptocurrency can keep each client anonymous. Otherwise, private information could be subject to hacks or breaches.

Users can stop there or choose to upload their genetic information to the Zenome platform. Companies or scientists can use the platform to seek out compatible genetic profiles to study and pay users in cryptocurrency.

“There is a huge adoption of the blockchain because it protects from cyberattacks and gives people a level of assuredness that their data will be protected,” Vadim said.

As Zenome builds a more robust genetic testing kit and a decentralized payment system, it plans to bring its services to more individuals, couples, families, and businesses around the world. Today, the Russia-based company prices its kits competitively for consumers in its home country.

And it plans to begin offering test kits to consumers in Germany and the Baltics soon. To accomplish that, Zenome will continue partnering with producers of genomic sequencing equipment and chemicals throughout the world.

Zenome also plans to develop genomic tests that are appropriate to different communities.

“The quality of the genomic test, in terms of ethnicity, depends on the quality of the database and tests carried out earlier,” Vadim said. “For example, certain pharmaceuticals can be more useful for Caucasian people, or people from Eastern Asia, or those of African descent.”

Couples should consider genetic testing so they can better plan their lives together. Another unique benefit of Zenome is that it can receive updated health and lifestyle predictions based on new research findings. If a researcher on the Zenome platform discovers something about a user’s genome, he or she will hear about it.

The genetic testing industry is set to be worth more than $17 billion by 2025. But Zenome sets itself apart by giving some of that capital back to consumers in cryptocurrency for their genetic information, while helping unearth information in their genes.

“We want to build a better world, and we are very enthusiastic. We are meeting new challenges, and it’s interesting to continue building our products,” Vadim said.