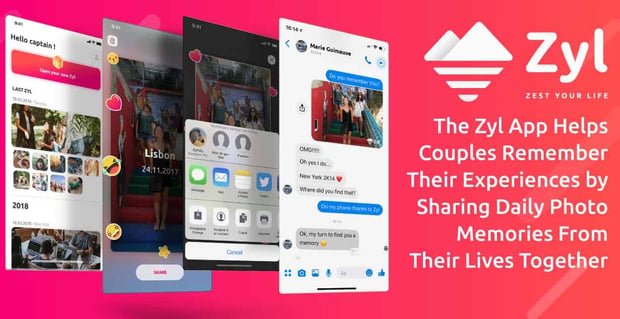 The Short Version: Many couples have hundreds — if not thousands — of precious photos on their phones and devices that can get lost in the shuffle. Zyl changes that by bringing those memories back to the forefront. The app selects memories from mobile photo galleries and displays pictures a user took six months, a year, or even five years ago. When users share those memories with partners, friends, or family members, they can relive their wonderful experiences — and resolve to have more.

When users download Zyl, an app that unearths treasured photos from the galleries on their mobile devices, they never know what memory they’re going to get. The picture could be from three months ago, or it could be five years old.

For one man, Zyl brought up a photo from a trip he’d taken with his girlfriend to Thailand a few years earlier. He texted the image to his girlfriend, who was delighted to see it. The image brought back such great memories, but she had one question: Why hadn’t they visited Thailand in such a long time?

So, a few days later, they booked a flight back.

“We try to create a bridge between photos and real life,” said Mathieu Spiry, Zyl Co-Founder and CEO.

The Zyl app allows people to relive their memories by connecting them with nostalgic photos from their photo galleries.

Mathieu and his team have heard plenty of stories about couples who were inspired to return to destinations they love because of a memory shared by Zyl. The app often helps couples recognize the joy they felt, and they want to bring more of that back into their lives.

Even Mathieu enjoys that nostalgia.

“My wife recently sent me a picture of a trip we’d taken to Hawaii,” Mathieu told us. “We remember having such a great time, so we decided to book another trip there.”

Of course, Zyl doesn’t just inspire couples to travel more regularly. Often, the app spurs connections and reconnections between people who haven’t seen each other in a while. If Zyl brings up a photo of an old friend from 10 years ago, for instance, a user may be inspired to text that person to see how they’re doing. Or users may realize that it’s time to get together with a relative they haven’t seen in some time.

“After reliving old memories with Zyl, a lot of people decide to get some drinks together and reconnect,” said Mathieu.

Reminds Users of Experiences With Family, Friends, and Partners

People may think that social media will help you keep track of your photos. After all, 95 million photos and videos are shared on Instagram every day.

But social media users only share about 1% of the photos they take. Smartphones allow people to take a vast number of photos every day, but they may only have time to share a few of those photos — if any — on social media.

So, even when those photos show up as memories on social media, they’re likely only a fraction of what is in someone’s smartphone photo gallery. And as those photos get pushed into the past, it’s less likely that people will scroll back through them.

Parisian app developers and photography aficionados Mathieu and Aurélien Sibiril set out to change that culture of taking, sharing, and forgetting photos.

“Everybody takes a lot of photos, but we only share 1% of them and don’t do anything with the other 99%. We realized we needed to create an app that reminded people what they did with their family and friends,” Mathieu said.

An old photo might remind someone of when they spent a beautiful afternoon at the park with their partner or when they had a great dinner out with their mother.

The app doesn’t necessarily focus on significant yearly anniversaries. Instead, its algorithm randomly generates memorable photos and reminds users when they took them.

The Team Spreads Their Love of Photography With Others

Mathieu and Aurélien are childhood friends who share a passion for photography.

“We met when we were 9 years old, and now we’re 33. We love photographs. We love adventure photos, and we also take photos during weddings and events,” Mathieu said.

The two friends initially designed Zyl, available on iOS and Android, to manage photos. But they began searching for a way to make the app even more useful. A lot of users mentioned they enjoyed the virtual memories they’d receive through social media or on their phones. But these virtual memories were few and far between, and they wanted something that would share older photos more often.

With that feedback, Mathieu and Aurélien grew Zyl into the platform it is today.

Zyl gives users a great excuse to message a partner or family member to reminisce.

“If you like to remember, we provide you with new, great memories every day, not just occasionally like other services,” Mathieu said.

With the ubiquity of smartphones, it’s no surprise that Zyl attracts users of all ages. While many of the users are between the ages of 25 and 35, Mathieu said most Zyl users are “nostalgic about their lives.” That could be anyone — from a couple whose daughter recently left for college to younger couples with demanding jobs who want to remember when they had more free time.

Best of all for Mathieu and Aurélien, though, is that the app is serving its purpose.

“We wanted to ensure people’s photos weren’t dying on their phones,” said Mathieu.

Zyl has already made considerable strides and is expanding beyond France and Europe to attract more users in different countries. Soon, too, the company plans to develop additional features to make the app even more communal and interactive.

One feature in the works will encourage friends and family to share multiple photos of the same activity. For example, if one user shares a memory from the office holiday party, other users can add their perspectives to that event with their own pictures.

“When you find a great memory, you can share it, and your friends can complete the memory with their photos from the same moment,” Mathieu said.

Other tools will allow users to interact more with friends and family through the platform. The Zyl team describes another new feature as a hybrid social network that doesn’t include strangers. Instead, Zyl users will only interact with people they know.

“It’s a social network with people you already have in your life,” Mathieu said.

Users can share photos with their community, and others can comment, add emojis, or record a voice memo to add to the memory. One user may have a unique perspective on the event, while another may remember details that the photographer forgot. Everyone sharing their point of view can bring back a richer recollection of what happened in that moment.

“We want to create social networks for memories. The idea is that you can remember even more about what the environment was like when you took the photos,” said Mathieu.