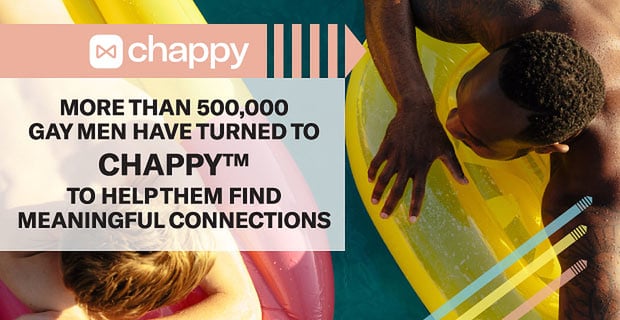 More Than 500,000 Gay Men Have Turned to Chappy™ to Help Them Find Meaningful Connections

The Short Version: The world of online gay dating is often based on hookups that can leave commitment-minded singles feeling frustrated. Now, there’s an alternative: Chappy. This gay dating app makes kindness and respect a priority among members and provides a path to help them find a meaningful, real relationship. The more than 500,000 members take a pledge to treat others as they want to be treated, and, as a result, Chappy has become a positive, safe space for gay men to make connections in a way that feels right to them.

Most commitment-minded people who’ve tried online dating can often tell when another person is being disingenuous. It can be as simple as a “Hi” when you clearly have a lot of info in your profile to prompt an interesting question. Or perhaps they request a sexy photo — when all you want to do is see if you have hobbies in common. Connecting with someone on a deep level through dating sites and apps, including in the gay dating world, can be difficult.

Sometimes you start chatting with someone, and you think there’s potential. Then suddenly the communication stops with no explanation, commonly known as being ghosted. According to The Advocate, ghosting in the gay dating world is a problem — with the most popular apps having a 50% likelihood that a match will simply fall off the face of the Earth (even after messages are exchanged and dates are arranged).

These experiences can be hurtful and leave you doubting yourself. Is it you, or are most online daters just flaky?

Thankfully, the answer is no — it’s not you. The dating app Chappy is designed to make online gay dating a respectful, positive experience. All members are required to take a pledge to treat everyone using the app with the dignity they deserve making the entire tone of the app courteous.

This relatively simple principle of authentic and kind human connections is not the norm in the online dating space today, but is something that we firmly believe in,” said Sam Dumas, the Head of Brand and recently appointed Co-Founder for Chappy. “Our focus has always been, and will continue to be, on making dating possible for gay men by creating a positive, safe place for gay men to form real relationships.”

Users Pledge to Respect Each Other

Perhaps one of the most unique aspects of Chappy is that the app asks users to promise to be considerate of one another. Sam said this is at the heart of the app and sets the right tone from the beginning.

“At Chappy, we believe that beauty is found in the way you treat others. Discrimination by race, religion, disability, gender identity, age, or anything else is strictly prohibited,” he said. “Using Chappy, you commit to treating your fellow member with respect, kindness, and honesty, without judgment or bias.”

Chappy has been around for a couple of years and is already making an impact in the gay dating space.

“Once you’re in the app, it’s all about mutual connection. We have the swipe mechanism, which means you have to both agree to match. No unsolicited advances or pictures; it’s all on your terms,” he continued. “We also provide users with a sliding scale, so they can choose what they’re looking for. Match with people looking for the same thing as you and cut out the uncertainty.”

A Diverse Team of Professionals Develops an Inclusive, Safe Space

In 2018, the team behind Chappy underwent some major changes to pave a path toward expansion of the brand. First, in August, two of the three founding members, Jack Rogers and Ollie Locke, stepped down, while the board of directors appointed Sam Dumas as Head of Brand and gave him co-founder status. The third founder, Max Cheremkhin, remains on the board as part of the integral transition team.

Next, the team’s global headquarters moved to New York City with a team also remaining in London.

“I’ll be honest with you, I think I have the best team in the industry. When I took the role at Chappy earlier this year, I felt a responsibility to build a team that was reflective of the brand we are building,” Sam said. “It’s something that Whitney Wolfe Herd [Bumble’s Founder] had impressed on me when I first started and has stuck with me since then. The internal culture is the backbone of our brand and our company. We have a vibrant and hard-working team.”

Chappy has undergone a few changes to make the user experience even better.

Along with the professionals running the brand, Chappy also recruits optimistic individuals to be ambassadors for the app. These ambassadors help get the word out about the difference the app makes in the gay dating community through marketing and communications work.

Chappy has been around for a couple years, so the team relies on ambassadors and members to let others know that there’s an alternative to the prejudice and rudeness that can take place online.

“Chappy has always been a brand built on kindness and respect in gay dating. We really stand alone in that regard. I remember when I started, I was really encouraged and impressed that Chappy, only a year old, stood out for something deeper,” Sam said.

More Than Half a Million People Have Joined the App

One thing you can’t do is be a jerk. The concept behind the app started when the team held a series of focus groups to really get an in-depth feel for how gay men feel about dating online, what their personal experiences have been, and what they want in a dating app.

“The most important thing we, as a company, can do is listen to our users. We ask them what they want and what they feel like they need when it comes to online dating,” Sam said. “We heard over and over again that men want a space to form gay relationships, not marked by a length of time or level of commitment, but stamped with an authenticity that, sadly, they don’t have in any other online spaces.”

Chappy has more than half a million members who come from all over the world.

“Gay dating doesn’t need to feel impossible,” he continued. “Forming relationships isn’t impossible. We have a large network of over 500,000 users, who we’re proud of, who understand this and choose to be on Chappy.”

One way the team connects with members and ensures a respectful environment is through the blog. One popular post gives tips on how to find the right guy in 10 swipes. Here’s a hint: It isn’t being impolite.

“Any abusive or discriminatory comments in your bio will be moderated, and you won’t be allowed on the app. It’s quite hard to find a guy if you can’t even use Chappy, so let’s treat others how you’d like to be treated,” the article reads. “We always encourage people to be open-minded. Spend some time looking through guys’ profiles and READ their bios. You’re much more likely to have a successful match if you swipe on guys who you have something in common with. Don’t just swipe left based on one photo; you could be missing out on a connection that’ll stand the test of time.”

Chappy: Where Being Nice Can Help You Make a Connection

It’s kind of a simple concept at Chappy: You’re more likely to find someone interesting, fun, and kind if you’re also a nice person. It worked for Brad and Dom, who outlined their Chappy-fueled romance in a blog post.

“We met up, had pizza, went for a long walk on the beach (after dark in Herne Bay), and spent the night together. I think Brad was surprised I didn’t run off as soon as I saw him, but I was just as surprised he didn’t do the same to me! Especially when he found out I love pineapple on my pizza,” Dom wrote.

“A few weeks later, and after a few weekends together, we had a talk, and I uninstalled Chappy along with all the other dating apps. We’d decided to start dating properly and become exclusive. It all felt so natural,” he continued.

Sam told us how rewarding it feels to hear stories, like Dom’s, every day.

“Most recently, I got a direct message on Instagram from two men thanking Chappy for matching them. Their names are Vaughnel and Cam. Last year, both were newly single and decided to test the dating app waters and see what and who was out there,” he said. “Fast-forward nearly 12 months, where they let us into their gorgeous one-bedroom in Jersey City to show us an exclusive look at how love looks and feels to them. Together, happy, and grateful to Chappy. What’s better than that?”