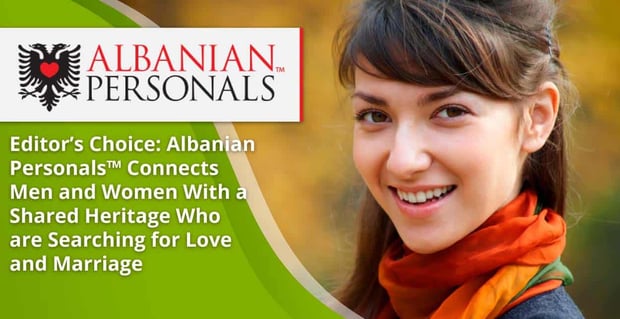 Editor’s Choice: Albanian Personals™ Connects Men and Women With a Shared Heritage Who are Searching for Love and Marriage

According to one study, around 85% of Americans marry someone of their same race or ethnicity. While intermarriage — or marriage between people of different races or ethnic groups — has nearly doubled since the 1980s, many singles still desire the shared values and interests that often come with dating someone from one’s own culture.

That’s why World Singles Networks developed a collection of dating sites where singles around the globe can find partners with shared experiences. Its dating sites include Iranian Personals, Eligible Greeks, Arab Lounge, and its newest addition, Albanian Personals.

Albanian Personals gives singles the chance to meet compatible daters throughout the world.

World Singles Networks’ established dating sites already have plenty of satisfied users. For example, two users of Iranian Personals who are now married said in an online testimonial, “How exactly can two normal, successful, modest… second-generation Persians meet? We would like to say it was fate PLUS a lot of help from (Iranian Personals) as well.”

Two Eligible Greeks users, who are also now married, said they searched online for a Greek dating site before finding Eligible Greeks. “On our first date, we set eyes on each other with a big smile, and straight away we knew this was love at first sight,” the couple gushed in a testimonial.

Albanian Personals aims to build on the success of those sites. Albania is a small country with a population of only around 2.5 million people, but singles of Albanian heritage live around the world. Those born elsewhere who have learned about their Albanian background — or even grew up celebrating Albanian traditions — are also welcome on the Albanian Personals.

“By signing up on Albanian Personals, singles worldwide can interact and connect with potential matches in terms of interest, culture, and ethnicity,” said a spokesperson for the site.

Simplicity is Key to the Platform’s Success

Albanian Personals focuses on creating a supportive atmosphere where singles feel comfortable meeting one another.

The site offers support for members if they ever encounter any issues. Users can chat live with a representative or reach out through email or phone to quickly resolve any problems. Team members also speak multiple languages, so they can help members who speak Albanian, English, Italian, or other languages.

“This diverse cultural background allows us to better relate to the ethnic diversity of the members on the site,” said the Albanian Personals spokesperson. “We better understand those cultural norms and better serve the needs of our site users,” said the spokesperson.

Singles can create a profile on Albanian Personals for free and start making connections.

On Albanian Personals, users can fill out a profile in minutes, and join for free by detailing where they live, what they’re looking for, and providing their age. After registering, users can add more information to their profiles and even upload a photo.

A member of the Albanian Personals team screens each profile for authenticity. That weeds out fake users and bots to make it easier for genuine singles to find each other.

Most interactions between users occur through sending likes, chatting, and creating what the site calls “Connections.” If you’re interested in a user, you can “like” their profile and, potentially, chat with him or her. If two users like one another’s profiles, they form a Connection by expressing their mutual attraction.

“Given our growing member base, singles can browse profiles, chat with online members, and communicate offline through our messaging system,” the Albanian Personals’ spokesperson told us.

Many users prefer to restrict their searches just to people of Albanian ancestry. However, members who join Albanian Personals can expand their search to include users on any dating site operated by World Singles Networks.

“Albanian Personals connects Albanian daters with worldwide singles. With the add-on option for World Singles, they can also meet matches from various cultures and backgrounds,” said the spokesperson.

World Singles Networks runs a variety of dating sites for people from all different backgrounds.

World Singles Networks include a variety of dating sites focused on many ethnicities. The sites cater to, among other nationalities, Indian, Italian, Jamaican, and Vietnamese singles living around the world. Another network site — SoulSingles.com — focuses on black singles. One of World Singles Networks’ sites, LovingBBW.com, isn’t focused on an ethnic group but instead caters to lovers of big, beautiful women.

If users choose to explore World Singles Networks, they also have access to an expanded dating pool of high-quality singles. The network’s sites have over 5 million combined users who live primarily in the United States, the United Kingdom, and Canada. And the most common types of users are professionals who have college degrees.

Users can search for singles who may not be part of their ethnic group but with whom they share other interests or passions. Albanian Personals users often expand their search past ethnicity to find someone who lives near them because another Albanian single may not live close by, and they aren’t willing to relocate.

“With all the good that technology promises, we maintain that it’s nothing if people are not placed first and are the top priority,” the Albanian Personals spokesperson told us.

Albanian Personals: Fostering Romance Between Like-Minded People Around the World

Singles of many different ethnicities in the U.S. often want to meet someone with whom they share a cultural bond. But they don’t want to waste time on a dating site that’s difficult to use.

That’s why Albanian Personals was recently updated with features that encourage more engagement with others on the site. Users can also provide feedback on those features to the development team so it can continue to improve them.

“Our team of programmers constantly introduces new technologies to enhance the member experience and work to maximize progress,” the Albanian Personals spokesperson told us.

Ultimately, that connection between the team and users fosters inclusion, collaboration, and growth. Albanian Personals aims to provide whatever will make users feel more comfortable and in control of their dating experience. Meanwhile, the team hopes that members will reach out with their questions or concerns.

“We will continue to improve as we see more members joining every day,” said the spokesperson.

World Singles Networks is excited to expand the services it offers Albanian singles. The more ethnic groups it can reach, the more romantic partnerships the network can foster.

“We take pride in connecting hearts all over the world,” the Albanian Personals spokesperson told us. “We build tools and services for people to experience more meaningful, powerful connections, and we trust that this will transform the world.”