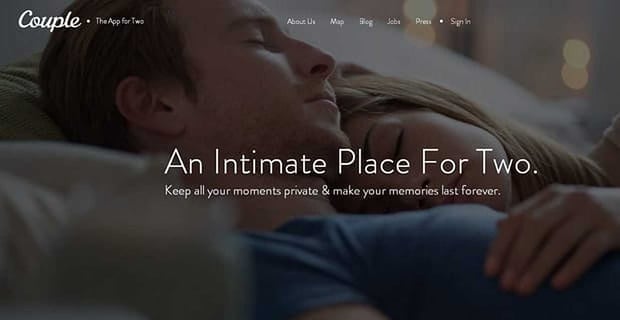 TL;DR: Couple is an app dedicated to keeping lovers who are geographically separated, whether for the short term or long term, in contact with each other. With more than 3 million downloads and more than 2 billion messages sent, it’s clearly one of the most popular relationship apps around.

Relationships are hard work – there’s no doubt about it. Long distance, too much time spent at work and disagreements all play a role in putting stress on a relationship.

But what if there was something that could overshadow all of those things and bring you and your partner closer? Well, there is and it’s called Couple.

Thanks to tools like shared timelines and to-do lists, as well as real-time interactions like Thumbkisses, Couple has without a doubt helped more couples reconnect.

A project close to their hearts

Couple is a personal project for its creators.

Working in San Francisco for TenthBit Inc., the Y Combinator-backed mobile app studio that created Couple, meant the team was thousands of miles away from their significant others in Canada, leaving them feeling disconnected.

Too many international texting rates, impersonal Facebook messages and failed Skype calls later, the founders decided to take matters into their own hands.

“We found ourselves spread across all these different services, but we noticed that even though we were so busy and we didn’t have time to talk to friends, a majority of our communication with our partners was still going,” said Oleg Kostour, TenthBit co-founder and CEO.

And so Couple was born.

Formerly known as Pair, Couple, which is available on iOS, Android and desktop, stands out from other private social networks because it does something the others don’t do – allowing just two people to create and retain memories all in one convenient place.

Having built Couple from personal experience, the team put themselves directly in the users’ shoes, adding a relatable quality to the brand and making it the exact app couples have been waiting for.

“A lot of other people felt very similar to the way we felt and saw the need for something like this,” Kostour said. “We really focus on quality.”

The best of the best

Getting 100,000 downloads and cracking the app store’s top 10 in its first week, Couple easily solidified its place as one of the best couples apps in the world.

But it’s not just the numbers and high user ratings that are impressive – it’s the entire feel of the app.

At its core, Couple’s goal is to provide partners with simple tools to create a stream of memories they can refer to for years to come, which include the ability to:

However, one of the coolest features Couple offers has to be its live map, which shows hotspots where other couples are interacting.

“The whole experience together makes it unique. We try to cover different aspects of your life that they [other couples apps] might not have solutions for,” Kostour said. “All in all, basically we create a really great experience for you and your partner, just a great chat experience, and then over time as you use it more and more, we aggregate all of your memories in one place.”

A complement to dating apps

While a lot of apps target the early stages of a relationship (meeting, hooking up, dating, etc.) and are battling it out to be top dog in that field, Kostour said Couple fills the needed space for the step after you find the right partner.

“We’re focused on the second stage of that life cycle, and I think that’s where our niche is,” he said. “In many ways, we’re almost complimentary to dating apps because where they focus on pairing people up, we focus on keeping them together.”

So if you’re ready to take your intimate relationship to the next level, download Couple today via the Apple Store or Google Play.