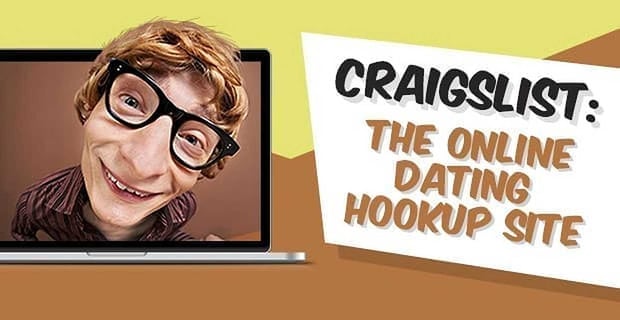 You know where to go when you’re looking for a roommate, a job or a used bike, but have you used Craigslist for online dating?

Like most of the site, the posts are listed chronologically with the newest first.

Unlike most online dating sites, there are no real formats to follow. Write whatever you want, as much or as little as you want. Post a picture if you want.

Searching the ads is just as unstructured. Once you’re in the section that matches your pursuit, the only search forms available are age, keywords or pictures.

It’s hard to believe anyone would use this medium to find love. It seems very archaic, limited and fast moving.

But the down and dirty approach seems to represent Craigslist users to the T.

Who uses the personals section of Craigslist and why?

After posting several ads on the site and personals section itself, I found plenty of people willing to tell me their Craigslist dating stories.

Most of the people who contacted me about their experiences were male.

Themes of “dating” through Craigslist include don’t make expectations and be careful.

Both of these warnings come on either side of the spectrum of what can happen. Some people get sorely disappointed…

The disappointments can include prostitutes, theft, spam, scams and men — lots and lots of men contacting each other (usually unwelcomed).

One guy told me he met his soul mate on Craigslist and they later used the site to vet for some swinging.

When I asked my sources if anyone actually looked to date through Craigslist, the answer was resoundingly, “No, not really.”

As one guy put it, “It didn’t matter what section I posted in or responded to, the vast majority of women I have met on CL were interested in casual sex. I have concluded that despite what is expressed in the post, CL is nothing more than a booty call site.”

Who are the people using Craigslist?

“CL is for people too bored at work, too stoned at home and too lazy to actually move from their chair to get a date. Bottom-feeders of the online dating world.”

Ouch, does it take one to know one?

Things you’ll need to know if you want to try out Craigslist for yourself:

Any Craigslist users out there want to expand on how they use the personals section? I’d love to hear your stories – good or bad!