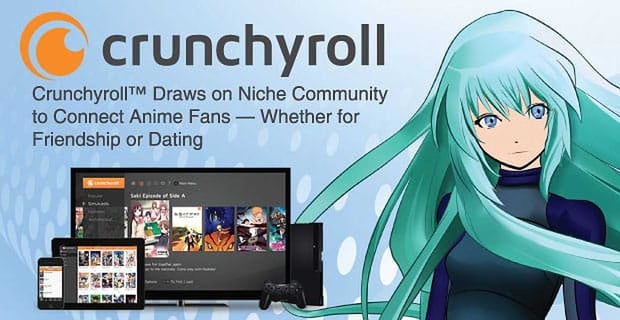 The Short Version: Crunchyroll is an online streaming service for popular anime shows and movies as well as the latest Manga and related news. The site has built a massive following since their 2006 launch — in large part thanks to their active forums. With over 20 million registered members and 750,000 subscribers, Crunchyroll is a great place for anime fans to find a new friend, a convention buddy, a compatible date, or possibly a life-long relationship. The team even gets involved, answering members’ dating questions and offering recommendations for the perfect anime date night. Being one of the last forums that anime lovers really use, Crunchyroll has embraced the community feel and has their own mascot — Crunchyroll-Hime — to help fans immerse themselves in the lifestyle even more.

“If I used Tinder, my bio would say, ‘If you don’t like anime, swipe left. Don’t talk to me,'” Victoria Holden said with a laugh during a recent phone call.

As the Brand Manager for Crunchyroll, a website devoted to streaming anime shows, posting Manga, and sharing industry news, Victoria’s life revolves around this passion, as it does for many people. Founded in 2006, Crunchyroll has evolved into the best place for die-hard anime fans to have a conversation, find a friend, or maybe even a date.

Brand Manager Victoria Holden is a huge anime fan, just like the millions of users on Crunchyroll.

The site boasts over 25,000 videos and 15,000 hours of licensed content from leading Asian media producers. That content has also allowed Crunchyroll to amass a following of over 3 million users in their forums. The anime community uses those forums to meet like-minded anime fans, discuss life events, and even find dating advice. Threads on dating are so popular, Victoria devotes time during her weekly podcast to answering dating questions from forum members.

“There are so many dating advice threads on our forums. It is crazy,” she said.

The company’s involvement with the anime community doesn’t stop there. Through engagement with fans on social media, their carefully curated online store, and the creation of their mascot, Crunchyroll-Hime, they have become the premier destination for the anime lifestyle.

Whether you are looking for a new show, T-shirt, a friend, or more than a friend, you can find it at Crunchyroll — along with millions of passionate anime fans.

3 Million Users Dive Into Dating Discussions on the Forums

With Crunchyroll’s active forums drawing all types of posts, it shouldn’t be surprising that dating threads abound. In “Crunchy Connections,” threads range from members asking for advice — Is it right to date your friend’s ex? —  to users discussing personal preferences — Which types of guys would you avoid dating? The threads sometimes even take a turn for the fantastic — If you could date any anime character, who would it be and why?

According to Victoria, having a forum full of anime enthusiasts allows members to be more open with each other.

“A lot of people outside of the anime community don’t understand why we like it. And some anime fans feel like no one understands them,” she said.

The Crunchyroll forums are simple to use and allow you to quickly get into the conversation.

Victoria went on to say that many fans can be hesitant to use mainstream dating websites to find partners because of their unique, and passionate, devotion to anime. Crunchyroll is one of the last remaining forums that anime watchers frequent, so in some ways, it has become the site for those connections.

You won’t have to fill out a dating profile, but you may have to explain why you don’t like Gundam Wing. The forums are an organic extension of Crunchyroll, a place where you can get to know other users through interesting threads.

Victoria hosts the weekly Crunchycast with Evan Minto, a Crunchyroll software engineer, and said they try to answer at least a couple of dating questions during each podcast. The questions come from podcast listeners, and Victoria answers them truthfully, even if the answer is complicated.

On a Crunchycast earlier this year, she responded to a question from a girl who wanted to know if she should stop pursuing a guy after he implied they couldn’t date because he didn’t want to hurt her.

Evan Minto and Victoria Holden prepare for a Crunchycast, where they discuss anime, dating, and life.

“Get over him,” Victoria said. “If he liked you, he would tell you he was down or that he wanted to date.” After pondering the question a bit more, Victoria expounded on that advice. “Just get clarification. If that is a polite way of turning you down, then I would say get over him. But you could ask him, ‘Do you really like me?’ and find out.”

Her advice is straightforward, and she also tells potential daters to be upfront with their love of anime.

“Being upfront by mentioning nerdy stuff is a good idea because there will be people who just don’t understand it,” she said. “I definitely want to date someone who is not going to judge me for my hobbies or the amount of time I want to put into them.”

Being upfront with an interest in anime can save time, especially because of the passionate nature of many fans.

“I feel like people are never usually moderate anime fans, and I want to make sure someone gets me,” Victoria said.

What’s the Best Anime to Watch on A Date Night?

Crunchyroll has anime for every different occasion, including a date night, but some choices are better than others for setting the mood, said Victoria.

“I would say any Hayao Miyazaki or ghibli film. They are beautiful, almost always feature a romantic element, always pleasant, and they always make you feel really good. They will make you feel comfortable, and, by the end of it, maybe wanting to get a little… closer.”

Haku and Chihiro from “Spirited Away” are one of Victoria’s all-time favorite anime couples.

She also talked about her favorite couple, Haku and Chihiro from “Spirited Away,” saying she watched them when she was 16 and still related to them.

“It’s all about first love. Anime is obsessed with first-love stories,” she said.

Expanding the Anime Lifestyle — From Social Media to Merchandise

Fans of anime have always immersed themselves in the lifestyle, and Crunchyroll caters to them. The website’s store is filled with items that are popular but also relevant.

“We curate what’s in there, so the items are relevant to what fans’ tastes are at any given time,” Victoria said.

Victoria said that she often talks with people as Crunchyroll, and even told us that she once responded to someone who messaged Crunchyroll’s Twitter saying, “I just broke up with my boyfriend and need someone to talk to.” Victoria said she was on her phone until 2 a.m. messaging back — as the brand Crunchyroll — to help out.

Company mascot Crunchyroll-Hime has her own devoted following and recently-launched comic book.

The company’s mascot, Crunchyroll-Hime, commands her own devoted following and has recently launched her own comic book.

“People have grown to love her. Some even say, ‘She’s my girlfriend’ or ‘She’s my waifu.’ They’re so cute,” Victoria said.

That passion is what keeps Crunchyroll growing, most recently being added as a channel to a new service called VRV (pronounced Verve), which will allow anime fans to explore other related content they might like. There will also be some exclusive Crunchyroll content on VRV, which will debut later this year.

Through these changes, Crunchyroll continues to establish themselves as a destination for anime and the broader anime conversation.

Crunchyroll Has Helped Take Anime From Niche to Mainstream

The company began as the brainchild of a few buddies from Cal-Berkeley, including Co-Founder Kun Gao, who just wanted to watch anime. They created Crunchyroll to help themselves, and other fans, watch the newest shows and movies. Now a global phenomenon, Crunchyroll has maintained a sense of family.

“The company culture is definitely unlike any other company,” Victoria said. “In the beginning, we felt like a family, and we still really do, which is insane. We should not be this close with this many people, but I think Crunchyroll is really good at hiring people who are going to fit our culture.”

The Crunchyroll family works together to bring anime to the masses.

She describes the atmosphere as open, fun, and sometimes loud with people shouting about the latest anime episode they watched.

Oddly, that atmosphere sounds a lot like the forums at Crunchyroll, which also bring people together by being open, fun, and continuing the anime conversation.

And, if like Victoria, anime is a prerequisite for dating or friendship, no one on Crunchyroll would be swiping left on you.