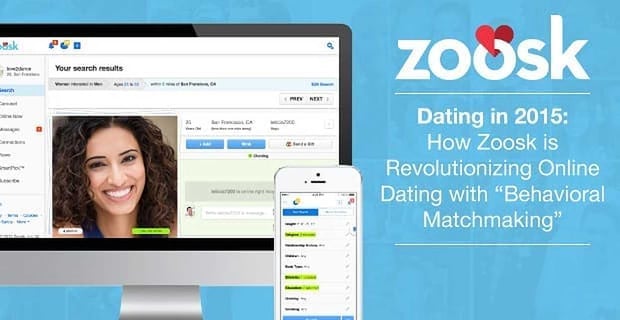 The 411: Thanks to its Behavioral Matchmaking technology, Photo Verification tool and many other one of a kind features, Zoosk has become a leading site and app that helps people get smart about online dating.

Online dating is stressful enough without having to fill out an extensive form that asks everyone and their mother the exact same questions.

What if there’s no right answer for you? What if you make a mistake? What if you change your mind in the future? Talk about pressure.

With Zoosk, there’s no 20 Questions-like game — just a personalized dating experience that helps you find the person and/or relationship that’s just right for you.

Using their unique Behavioral MatchmakingTM algorithm, Zoosk pairs users with like-minded singles based on their on-site behavior and preferences. Don’t like smokers? Say no to five smokers, and you’ll never be matched with one again. It’s really that simple.

And with more than 33 million members in more than 80 countries (not to mention it’s translated into 25 languages, is the #1 grossing online dating app in the App Store and has more than 14 million fans on Facebook and Twitter), Zoosk is clearly a pioneer in the space.

We spoke with David Pedersen, Senior Manager of Communications, to get an inside look at the history of Zoosk, the innovative technologies behind the company, its influence on the dating industry and more.

The inspiration behind Zoosk

Zoosk was a forward-thinking company well before its Behavioral Matchmaking engine.

Founded in 2007, Zoosk is the brainchild of Shayan Zadeh and Alex Mehr. Equally frustrated with online dating, Mehr, who was working as a legit rocket scientist for NASA, and Zadeh, who was working for Microsoft, decided to combine their powers to create a dating platform that doesn’t have a one-size-fits-all model.

“They wanted to bring technology and dating together to make the dating experience much more streamlined and easy to use,” Pedersen said.

First launching as a Facebook app, then a dating site and then a mobile app, the Zoosk team has always put creativity and the users first, and they continue to do that to this day with the release of the app on Android wear.

“It’s us making sure that we are putting our app where people are going to be using it,” he said.

After Zadeh and Mehr stepped down in late 2014, Kelly Steckelberg, Zoosk’s CFO and COO, took over as CEO and now leads with the same passion as Zadeh and Mehr had.

Always one step ahead

Besides being able to send messages, view profiles of people who’ve viewed your profile and make introductions with SmartPick™, probably the most impressive feature of Zoosk is its Photo Verification tool, which no other dating site has.

One of the biggest fears online daters have is meeting a match in real life only to find out he or she doesn’t look like their profile picture. With this picture authentication service, users can rest assured they won’t get catfished.

Since its August 2014 launch, the Zoosk Photo Verification service has verified more than 2 million photos.

All they have to do is download the Zoosk app and take a seven-second video of themselves. A Zoosk moderator will then compare the video to photos on the user’s profile and viola — we have a real person.

Since its August 2014 launch, Zoosk has verified more than 2 million photos.

“One of our biggest concerns, and I think every online dating company has this concern as well, is safety. Photo Verification is a feature that we launched in order to protect the safety of our members,” Pedersen said. “We are doing as much as we can to work toward eliminating catfishing on our site.”

The personalized experience you’ve been looking for

Not only does the Zoosk team put 100+ percent into the features they offer, but they also dedicate themselves to really listening to their customers’ concerns and adapting those features in order to improve everyone’s experience.

Zoosk doesn’t want to be like the cookie cutter dating sites out there that seem to pop up every week, and another way the company sets itself apart is by taking the pressure off online dating and helping you accomplish the goal you want, whether that’s marriage or not.

“Personally I think these niche dating sites, ones that are just catering to a small, confined certain group of people, don’t have much lasting potential,” Pedersen said. “We think we are doing our job if we get you one date, two dates, three dates, five dates, marriage, kids — any iteration of that is us connecting you with people. We want to make sure people are enjoying the experience and not so 100 percent concerned about the end result.”

“Any time something is coming out that people are excited about, we want to make sure we’re there and that we’re in it,” said David Pedersen.

Zoosk has already accomplished so much in the past eight years, but the future looks just as hopeful.

Pedersen said they will continue creating innovative products and honing their expertise, always keeping themselves at the forefront of technology.

“Any time something is coming out that people are excited about, we want to make sure we’re there and that we’re in it,” he said. “We’re really concerned with making our product as seamless of an experience as possible for people.”

To learn more about Zoosk and its Behavioral Matchmaking technology, visit www.zoosk.com. The app is also available on Amazon, Google Play and the App Store.