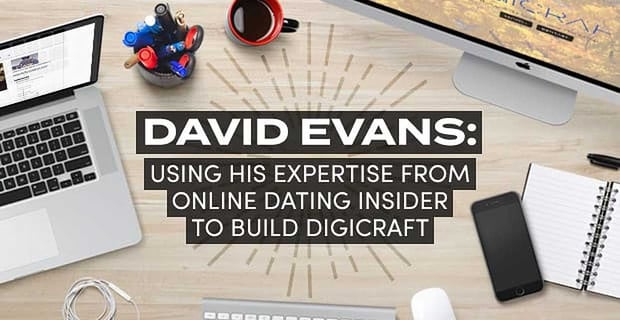 The Short Version: After using Match in the early days of online dating, David Evans quickly realized that it was an emerging trend. He decided to further embed himself in the space by creating his Online Dating Insider blog, which became a go-to for industry insights, and he, in turn, became a sought-after expert. He has since capitalized on his opinions by bringing his consulting, analysis, and advisory business under one brand — Digicraft. Over the years, he has helped dozens of dating companies, from startups to established businesses, all while shedding light on the space in his blog posts.

David Evans, in his decidedly self-assured and matter-of-fact tone, has a way of cutting through all the marketing language and industry jargon of online dating to offer honest feedback to his clients and readership. His consulting and advising for sites from OkCupid to Plenty of Fish and dozens more has basically earned him an honorary degree in the world of online dating, and his expertise has been quoted in publications like The New York Times and Inc Magazine.

His blog, Online Dating Insider, is heralded as one of the top industry blogs for online dating, where he shares his insights about what works and what doesn’t for businesses big and small, old and new.

It was his long-running blog that bolstered his place in the dating world, so he started Digicraft, his consultancy brand, as a way to bring together all the things he was great at under one name. Digicraft combines David’s knowledge on startup advisory and business coaching with his extensive understanding of dating trends and industry analysis he has gained blogging for the last 15 years.

While the Internet was busy finding its way into everyone’s home in the ’90s, David was working at an agency in New York trying to take advantage of the new Internet thing.

“My role was to demystify the impact of technology on marketing,” he said of working with the early adopters developing websites that would use e-commerce and online advertising.

From left: Sam Yagan, Co-Founder of OkCupid and Vice-Chairman of the Match Group, David Evans, voice of Online Dating Insider, and Markus Frind, Founder of Plenty of Fish, at an iDate conference circa 2009.

In 2002, David started Online Dating Insider as a way to blog personally about his use of Match as a single guy and also to share general online dating industry insights. As one of the first sites of its kind, Online Dating Insider saw a spike in use and grew to become the primary resource for industry news.

Almost 15 years and more than 4,000 posts in the blog’s archive later, David’s expert opinion was not only sought by media but also by investors and new business ventures. Hence starting his own consultancy in Digicraft.

“While talking to sites for the blog, plus all of the media attention I was receiving, the foundation was laid for me to start consulting and advising the dating industry,” David said.

David admits he wasn’t sure where his new business might take him at first, but Digicraft has since provided business and marketing plans for many companies, like Vintage Steele motorcycles, and websites, like Date.com.

The Problems With Dating Sites Someone Should Solve

While more people than ever are trying online dating, the core issues ​surrounding the industry remain​ — which David suggests include less-than-successful matching systems and the stigma of finding your significant other online.

“We don’t date online,” states one of his posts for Online Dating Insider. “We are introduced to people on dating sites.”

“The fact remains that you know more about someone after looking at their Facebook profile for 60 seconds than any eHarmony or Tinder algorithm could tell you.” — David Evans.

He also thinks sites could do more to weed out fake profiles and to keep its users safe by implementing widespread background checks and other security measures, actions which he described as remaining elusive.

“Let’s just say that the dating industry has barely addressed the shortcomings that I was talking about a decade ago,” David said.

The largest shortcoming, David went on, is that the dating industry does very little with the user behavior data it collects. “There are so many opportunities to get closer to the customer, improve the overall user experience, and help singles be better daters, but it goes mostly ignored.”

Your typical dating site will ignore behavioral matching because they’ve deemed it unnecessary to the bottom line, but they still struggle to find the right five profiles to show someone in a city of a million people. David believes the industry should start incorporating users’ “Social Exhaust,” referring to the networking people do online and in apps, into matching algorithms.

“The fact remains that you know more about someone after looking at their Facebook profile for 60 seconds than any eHarmony or Tinder algorithm could tell you,” he said.

When Digicraft is brought in, David reviews all of these issues in addition to helping form marketing and other business plans for companies in the dating space.

Over the years, David has offered industry-leading advice on how to design action-driven in-app purchases, where and when to put paywalls in place, and matching people in new, bold, and maybe even unproven ways.

Nowadays, Digicraft focuses on entrepreneurs in the dating world.

“Sites like The Grade are bringing analytics-lite to dating, which is important,” David said. “Give me a dashboard that shows my performance on a site, and, most importantly, shows me how to be a better dating community member.”

He explained that dating apps today need to focus on testing assumptions​. “Verify, then build, then iterate until you get it right,” he said.
​
David tells his Digicraft clients to get a basic site in place that satisfies their Minimum Viable Product idea, and then focus on tracking and monitoring everything. Once they have enough data to analyze, he helps companies go in and slowly adjust the user experience based on the data.

“You really have to understand how people use, or don’t use, your service,” he said. “And Digicraft helps companies get to that point of understanding.”

Online Dating Insider, along with the answers David has provided about the industry across Internet forums, remains a useful resource for anyone looking for insights into the online dating space, though David hasn’t been posting anything new on it for nearly a year.

While he is proud of the brand and voice he has built for himself with Online Dating Insider, David uses Digicraft to keep him inquisitive and hopeful about the future of dating.

“Virtual reality dating is going to be huge,” David muses. “And perhaps other technologies will enter the space, like Google’s ​Deep Mind, to act as an omniscient matchmaker — it’s exciting to think about​.”

He knows those advances far off, but part of what makes David and his Digicraft consultancy great is that ability to look far into the future of the dating industry and make relevant predictions today.

“At my core I love working with startups of all kinds, and I’ll continue to transition what I’ve learned in the online dating industry into something completely different, like eHarmony is doing with Elevated Careers,” he said. “Or, if my girlfriend has her way, we’ll be raising Alpacas in Vermont and being digital nomads.”