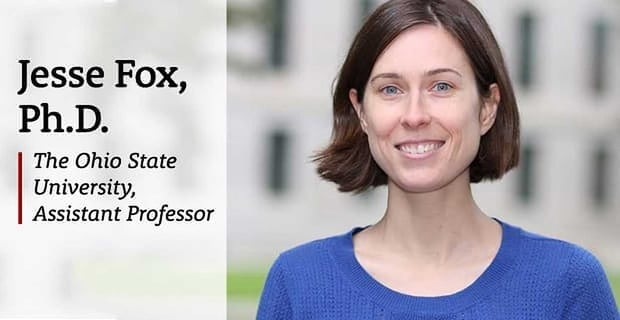 Dr. Jesse Fox: How We Represent Our Sex and Gender on Social Media

TL;DR: As an assistant professor of communication at The Ohio State University, Dr. Jesse Fox is the go-to expert on the topic of sex and gender representation in social media.

Since her undgrad years, Dr. Jesse Fox has loved the flexibility of the communication field, particularly when it comes to communication within interpersonal relationships.

And having been an assistant professor at The Ohio State University since 2010, she’s been able to expand on that love.

In her years of examining how people use technology, Fox saw there was a lack of research out there, especially in terms of the ways people interact and present themselves on social media sites when in a relationship.

“There’s this huge hole in research about romantic relationships and social media. Texting and Facebook are so integrated into the way we build these relationships,” she said. “Online dating is where it starts … and then immediately once that relationship starts to develop, it goes into a different context, which tends to be texting and interacting on social networking sites.”

Fox was kind enough to take me through her most recent study and share her fascinating results.

How do men represent themselves on social media?

In the publication titled “The Dark Triad and Trait Self-Objectification as Predictors of Men’s Use and Self-Presentation Behaviors on Social Networking Sites,” Fox used data from an online survey that consisted of 1,000 American men aged 18 to 40.

Her main goal was to look at their representations on social networking sites, as well as the role of “the dark triad of personalities,” which includes narcissism, Machiavellianism and psychopathy.

She had three major findings:

“All of that stuff is highly relevant to online dating,” she said.

According to Fox, the big takeaway from these findings is for people to think about the personality traits that drive behaviors such as taking and posting selfies, editing those photos, using filters on them, etc.

“We need to be constantly conscientious that with these technologies, whether it’s an online dating site, whether it’s a social networking site, whether it’s texting, there are a lot of cues that are missing,” she said. “There are other ways that those things can be used to present something that’s not completely authentic, and if we are going through this process of people filtering their images and editing their photos a lot, even if it’s not what we see as a lie or a misrepresentation — those behaviors are still indicative of that person’s personality.”

Fox said the main motivation behind her work is to draw attention to the good ways we can use technology and to remind us that what we see online isn’t always what we get, especially when it comes to relationships.

“I do this research to remind ourselves that nothing’s perfect, and that’s OK. We’re all going to have our traits and flaws, but what can we do to be authentic people and authentically find someone who’s a good match for us and then have a good working relationship?” she said. “Once we’ve met, once we’ve started dating, what can we do to keep making this a functional relationship? Not getting caught up in how we look or how our relationship looks on Facebook, I think those things are always helpful lessons to keep in mind.”

Her next academic goal is to look at healthy and unhealthy ways (i.e., Facebook stalking) people use social networking sites as a couple, particularly when their interactions don’t align, by asking questions like:

“There are just little things that people could have conversations about, and they forget that instead of being annoyed by those things or aggravated or angry, you can just have a preemptive conversation,” she said.

To learn more about Dr. Jesse Fox and her work, visit commfox.org.