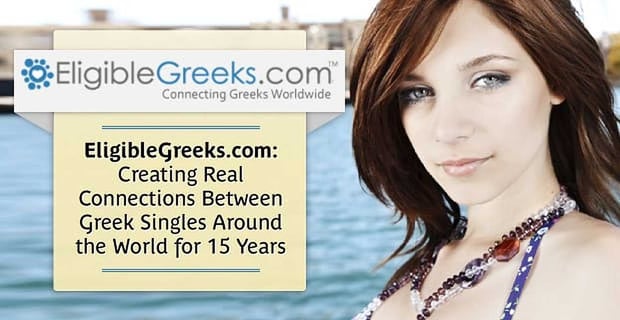 EligibleGreeks.com — Creating Real Connections Between Greek Singles Around the World for 15 Years

The Short Version: In Greece, they say, “Παπούτσι από τον τόπο σου κι ας είναι μπαλωμένο,” which loosely translates to, “Shoe from your place, even if it is patched up.” Christina Leontopoulou, Spokesperson for EligibleGreeks.com, said it basically means pick a spouse from the place you come from, even if he/she has a flaw or two. This dating site helps cultivate genuine relationships between Greek singles throughout the world. EligibleGreeks’ vast community (nearly 1 million members) and friendly environment act as a launching pad to create lasting bonds between thousands of couples. Whether you’re in Greece or anywhere in the vast Hellenic diaspora, EligibleGreeks can help you find pragma — the love shared by those in deep, mature, and long-standing partnerships.

Banayiodis and Louise bumped into each other at a Greek festival in Birmingham, UK, where he was selling football T-shirts and she was sightseeing. In an attempt to strike up conversation with the smiling woman, he grabbed an oversized Olympiakos jersey and tried to sell it to her as a nightgown. She thought he was funny but politely refused and went on her way.

That same year, both Banayiodis and Louise spent time in Cyprus on separate trips. While visiting Aphrodite’s birthplace, Petra tou Romiou, Louise noticed people making hearts using white pebbles from the shoreline. She grabbed one of the smaller stones from the center of a large heart and took it home as a souvenir. Not long after, Banayiodis was walking along this same beach and noticed the heart with a hole in it. He thought it was romantic, so he took a photo.

The heart was a perfect metaphor for their lives. They were happy, but there was something missing — they needed to fill a void in their hearts with love. And, as destiny would have it, their paths crossed on EligibleGreeks.com.

EligibleGreeks’ mission is to bring Greek singles together no matter where they are in the world.

“Louise sent a message to a user named Leonidas1821, and that username was, in fact, me,” Banayiodis said. “Once we realized we had bumped into each other at the Greek festival, once we realized that I took a picture of the exact pebble heart that Louise took the pebble from, we knew this was fate.”

The couple ended up getting married in Santorini in a traditional Greek Orthodox wedding ceremony. For 15 years, EligibleGreeks has been connecting people, like Banayiodis and Louise, in a fun and friendly online environment. The dating site boasts almost 1 million members and offers an ideal venue for Greek singles to meet their soulmates no matter where they are in the world.

Founded With a Mission to Spread Loving Vibes Across the Globe

EligibleGreeks.com launched in 2002 with a mission “to help create real connections and spread loving vibes all over the world.” The site also looks to make relationship building enjoyable and easy.

Many Greeks find it important to come together with others of their nationality and ethnicity, and EligibleGreeks facilitates this.

“Regarding Greek singles, although they do appreciate the company of people from all different ethnic backgrounds, they particularly enjoy meeting and hanging with other Greeks,” said Christina Leontopoulou, Spokesperson for EligibleGreeks. “Especially, when living outside of the motherland, finding a person who gets where you’re literally coming from and all that entails can be priceless.”

“From staff with more customer support-oriented skill sets to our more technically advanced team members, each one of us is in tune with our members’ needs and challenges.” — Christina Leontopoulou, Spokesperson for EligibleGreeks

Shared traditions, religion, family experiences, and, of course, food, bring a wealth of instant topics to discuss and bond over.

The team at EligibleGreeks helps make these connections possible. Speaking a smattering of languages, including English, German, French, Spanish, Arabic, Romanian, Farsi, and Greek, the team is exceptionally diverse. According to Christina, everyone brings expertise in an array of areas to help further the site’s mission.

“From staff with more customer support-oriented skill sets to our more technically advanced team members, each one of us is in tune with our members’ needs and challenges,” she said. “And we always try to improve our services based directly on customer feedback.”

This versatility helps the team understand how background and ethnicity can connect singles on a deeper level.

Join a Community of 1 Million Greeks and Find Your Match

EligibleGreeks has steadily grown for the past 15 years, in large part, due to how widely Greeks have spread throughout the world.

“Since we’ve started the site, we have welcomed close to 1 million eligible Greeks from Greece and Cyprus,” Christina said. “But so many of our members come from the broader Hellenic diaspora, too — the US, Canada, Australia, you name it.”

The sky’s the limit when looking for another Greek single with whom to build a relationship. Greek singles can start for free by posting some photos and completing a profile. By answering questions from the site’s more than 100 options and uploading photos to the online gallery, they can find others who are seeking friendship and love.

EligibleGreeks’ search functionalities make it simple for members to find others using  a number of criteria, including age, gender, location, or specific keywords. Platinum members can also perform specialized searches.

Getting started on EligibleGreeks is easy, and the sign-up process takes less than a minute.

The Photo Slideshow is a popular feature members use to browse the pictures of other singles on the site. The photos will be within the age range you specify and include a convenient age and location summary. If someone catches your eye, you can click Yes to send them a wink or learn more by visiting his or her profile.

“Another feature that our members love is called Connections,” Christina said. “In a nutshell, it works by allowing a member to show interest toward another member. If the interest is reciprocated, the two are connected.”

This way, connections happen in real time, which makes it easy for users to pursue their interests. This feature is so successful that, in the last 18 months, there have been 200,000 connections made.

Successfully Linking Thousands of Couples in a Friendly Environment

Serious relationships are not always easy to find. Thankfully, EligibleGreeks has a history of building lifelong romances. Hundreds of couples write into the site to tell their stories and give others hope in finding a match. And Christina loves it.

“You hear about men and women flying overseas to meet somebody special or even relocating due to finding the love of their life on EligibleGreeks.com,” she said. “We’re glad we have the reputation of helping form serious relationships between like-minded individuals who are genuinely looking for life partners.”

“Thanks to you, EligibleGreeks, I have met the man of my dreams. We couldn’t be happier, and it’s all because of you.” — Angi, a happy former EligibleGreeks member

Andrea and Jimmy are one such couple. They met when Andrea was just about to give up on love. After their first date, Andrea was impressed with his gentlemanly demeanor, and she knew he was just who she was looking for. After a year and a half of dating, Jimmy took Andrea to Turks and Caicos where he proposed, and they married soon after.

While stories, like those of Andrea and Jimmy’s and Banayiodis and Louise’s, are romantic, they are not rare on EligibleGreeks. So many couples share similar messages where they finally found the person they had been looking for.

Christina noted that couples who have similar backgrounds and compatible values make dating easier for many of the site’s members. And the multitudes of wedding and baby pictures former members post on the site prove that it’s working.

Not a site to rest on its laurels, EligibleGreeks.com is always looking toward the future for its members. Christina noted that making improvements and creating something specifically designed for their members is always front of mind.

“What we’ve been vigorously working on is our new and better responsive site design,” she said. “It’s a beautiful application we’re particularly proud of. It was built specifically around the needs and desires of our valued community.”

And this, according to Christina, can only mean more connections for EligibleGreeks.com’s nearly 1 million and counting.

Sean Garrity started working for DatingAdvice.com in 2016. He has an extensive background in researching, writing, and editing on a wide range of topics for industry and consumer publications. Sean’s goal is to inform modern daters of the latest trends, technologies, and solutions that might help them meet their match. When he’s not behind a keyboard, you can probably find Sean outdoors camping, fishing, or skateboarding.