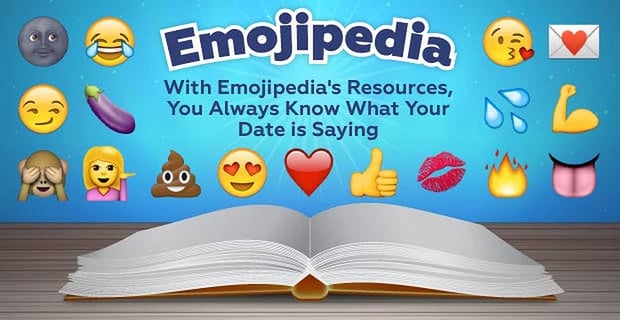 ?! With the Resources at Emojipedia, You’ll Always Know What Your Date is Saying

The Short Version: In the modern dating world, courtship takes place screen-to-screen as much as face-to-face. The emoji has become an essential means to add humor and heart to texting conversations. However, with over 1,300 emojis at your fingertips, it can be hard to know when to use what, and how. That’s where Emojipedia saves the day. As the preeminent database of all things emoji, Emojipedia has everything you could possibly want to know about the almighty emoji.

While pictographs are often associated with ancient cultures — the hieroglyphs of Egypt often come to mind — they have never truly fallen out of use. Pictographs pervade our everyday lives, showing up on menus and traffic signs, bathroom plaques and computer screens. In a world containing over 7,000 different languages, pictographs can be a more clear-cut and universal form of communication.

The latest in the line of graphical languages is the digital emoji — a library of characters designed to integrate into text, augmenting every typed language with pictographs.

When it comes to text messages and emails, the ability to apply an extra layer of tone or meaning can be helpful — especially in the online dating world, where so the courtship takes place on a screen.

“Emojis help replace all the body language and verbal cues,” explained the creator of the ultimate emoji reference site, Emojipedia. “Without emojis, you’re quite limited to be expressive, to be amusing.”

Emojipedia has had a great vantage point from which to observe the emoji evolution, as the website provides explanations of current emojis and documents the ever-changing uses and newest additions. From interpreting the meaning behind heart emojis to celebrating World Emoji Day, the Emojipedia team is passionate about keeping digital users up to date with emoji news.

The Rise: Documenting the Story One Emoji at a Time

The emoji fills in so many gaps in communication, and it can draw romantic connections with just one eggplant or peach.

With people all over the world using emojis to add clarity — not to mention personality — to their text-based discussions, there’s no doubt that emojis are becoming a real part of the conversation 😉 — when it comes to social media, online dating, and text messaging. The official Unicode emoji library is in its 16th iteration and contains over 1,300 unique characters.

While a great many of the characters are simple illustrations of nouns — car, mountain, candle — there is more to each emoji than meets the screen.

“Each emoji has a story,” said Keith Broni, the chief editor for the site. He described how the complexities of the emoji world inspired the site creator to build Emojipedia in the first place. Each emoji starts with a Unicode proposal, and a simple name — “hot beverage” or “camera with flash”. Then, it’s an approximately two-year journey to get from proposal to approval; it can be even longer before the character makes it through the bureaucracy and into a software update.

The emoji’s story isn’t over once it hits mobile devices; if anything, it has just begun. It’s at this stage that the emoji becomes a part of popular culture. The simple image becomes so much more — adopting secondary meanings beyond their straightforward definitions.

Some emojis change meaning through popular use. For instance, the skull emoji now commonly indicates laughter as a reference to the slang “ded” or “I’m dead” aka “I’m dying laughing.”

TikTok has spurred emoji evolution in a big way, and it even has some secret hidden emojis that Emojipedia helps users understand and use properly.

Why You Should Pause Before You Emoji & 3 Good Options

With so many characters and so many different ways to interpret them, it can be easy to make an emoji misstep. You may just be inviting your beau to the farmer’s market, but the “aubergine” (eggplant) emoji has taken on a very different social meaning due to its phallic shape.

The easiest way to prevent anything from being lost — or added — in translation is to check Emojipedia before you send or respond. More than just definitions, Emojipedia gives you popular culture uses, as well. “It’s this ridiculously in-depth view of every emoji, and everything that could be useful to know about it,” according to the team.

While you should always make sure you know what you — and your emojis — are saying, you can also have fun sending flirty emojis. Here are a few emojis you can use to spice up the emails and texts in your dating life.

Its indecipherable Mona-Lisa smile takes on a touch of whimsy when inverted, the combination giving this emoji great versatility.

Thought of as silly or sometimes sarcastic, the upside-down face is inherently ambiguous. It can mean literally anything! The emoji is perfect for a fledgling relationship. You don’t want to say anything wrong, so you throw that in there as sort of a, `Did I mean that, or was I joking?` It’s up to the recipient to decide.

The wink had been around the digital world for years as an emoticon before becoming an official emoji in 2010.

The wink emoji can be a fun, flirty way to show your comment was intended to be a joke (you don’t actually want pizza for every meal). It’s also the perfect response to indicate that you understood their double entendre — and approved.

While its official name is “face throwing a kiss,” this emoji is often colloquially referenced as blowing a kiss.

Another classic, the kissing face is great for more established couples. It’s a romantic way to tell your partner that he or she is on your mind, without making them feel obligated to immediately respond.

Present on every phone and computer we encounter, emojis have become ingrained in the daily lives of most people using digital communication. Going far beyond simple ornamentation, the emoji is definitely a true phenomenon. Showing the signs of burgeoning into a language all its own, the emoji truly demonstrates the continuing power of the pictograph on the human experience.

The emoji even has its own day: July 17, World Emoji Day. Much like Emojipedia itself, the holiday was started by the Emojipedia team because they simply felt it needed to exist. The emoji has become such a big part of what everyone does. Why shouldn’t it have a day? The date was chosen based on Apple’s version of the “calendar” emoji, and emoji fanatics everywhere celebrated the first World Emoji Day in 2014.

The holiday has become a worldwide event that even caught The Daily Show’s attention. World Emoji Day can include everything from new product launches — Emoji Pepsi anyone? — to special emoji exhibits, and, of course, tons of parties. The year 2016 also marked the first annual World Emoji Awards, hosted by Emojipedia.

With over 50 million visitors every month and counting, Emojipedia is proof that the emoji is no passing trend. The library of emoji characters continues to expand, with more inclusiveness and silliness being added all the time.