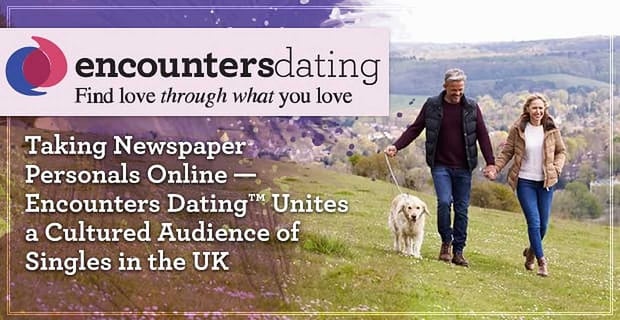 The Short Version: Before texting, websites, and chat rooms revolutionized the dating scene, singles would place personal ads in the newspaper to meet one another. Newspaper adverts, particularly in the UK, facilitated a dialogue among well-educated, middle-class daters who subscribed to the same papers. Today, Encounters Dating networks the UK’s newspaper readership for online dating purposes. The dating site launched in 2005 in partnership with The Times and now attracts thousands of singles in urban and suburban areas across the country. The secure dating site and app inspires confidence in members, with intuitive matching, easy search features, and a private messaging system to facilitate engagement. By cultivating a quality membership, Encounters Dating offers a premium online dating experience for adult singles in search of something serious.

A single mother in the UK had been on Encounters Dating for a few months when a particular profile caught her eye. She didn’t have time to waste in chitchatting endlessly online, so she sent a message to tell him she was looking for something real and invited him to answer back if he liked her profile and wanted the same things she did. He got in touch right away.

Three days later, they went on a date to a bar. “He was a man after my own heart and ordered a bottle!” she recalled. “We chatted and laughed for a good few hours.”

They played it cool at first, keeping their Encounters profiles active while sussing each other out, and as months passed, their feelings grew stronger. At last, because both would be alone on Christmas Eve, they made plans to spend the holidays together. He brought over “Breakfast at Tiffany’s,” and as they watched it, they realized the movie perfectly summed up their relationship.

“Everything was there, chemistry, personality, similar lifestyles, and the same driven attitude to our careers.” — An anonymous Encounters Dating member inspired by Holly Golightly

“That was two years ago, and my kids love him as much as I do,” she wrote in her testimonial. “Now, when the house is quiet on Christmas Eve, we watch ‘Breakfast at Tiffany’s’ together. I’m waiting for him to pop the question, but we both know for sure we’ll be together forever.”

Encounters Dating provides serious-minded daters a unique dating culture centered around newspaper readership. The Dating Lab, a leading provider of online dating services, dreamed up the site (and app) in 2005 as a way to connect subscribers of the UK’s largest daily newspaper, The Times. Now cultured singles in London and the surrounding Home Counties use the platform to create detailed dating personals and meet people online.

The dating website’s motto emphasizes the importance of common interests in dating.

Because of its roots in a notable and longstanding newspaper, Encounters Dating attracts a more mature and educated base of singles. If you’re someone who likes to stay informed, discuss the news, and bond in meaningful ways, Encounters Dating can connect you to thousands of similar daters worldwide.

“Our biggest selling point is the trust in the brand,” said Emma Iversen, Independent Consultant for the Dating Lab. “Seeing that newspaper brand engenders trust, and it helps people get over that initial nervousness that sometimes comes with online dating.”

A Trusted News Brand Inspired a Dating Site in 2005

Before the rise of the internet, many adult singles took out personals in the newspaper as a way of signaling their availability and seeking deep relationships. The UK’s newspaper circulation was an effective networking tool for middle-class readers. The medium ensured a quality selection of date prospects and gave singles a sense of security.

“We decided to take that experience online, and that’s how we came to launch Encounters Dating,” Emma explained. “It’s a service for readers — a way of enabling other like-minded Times readers to get to know one another.”

Encounters Dating brings the authority of well-known newspaper brands, including The Times and The Sunday Times, to the dating industry. Built on the foundations of a well-established media company, the platform provides a trustworthy space for singles who want to meet a person of substance.

Avid newspaper readers can connect with one another online using Encounters Dating.

Encounters Dating is a proud member of the Online Dating Association, which means it has promised to adhere to strict ethical guidelines to keep online daters safe on the web. A dedicated customer service team checks each photo and profile to protect everyone on the dating site from unsavory characters. Members can block anyone bothering them online, and the team does everything possible to remove any false or malicious profiles.

“It makes a great difference to users to join a brand where they can feel safe and secure,” Emma said. “The site is protected by a number of hidden technological features that are designed to both protect members and ensure the authenticity of profiles.”

As a safe and accessible dating platform, Encounters Dating caters to adults interested in finding a long-term relationship. The average age on the dating site is 51, so commitment-oriented individuals enjoy a mature and receptive audience.

“People like dating people like them,” Emma explained. “We offer a unique proposition with high user engagement and loyalty.”

The website’s layout is simple and user-friendly. You can search by age range or location to find a date prospect and initiate contact by sending a private message or adding the profile to your favorites list. The profiles have tick-box sections outlining appearance, hobbies, interests, and general characteristics, so you’ll see your commonalities at a glance. Members can connect with up to a thousand matches using the site’s intelligent two-way matching feature.

Encounters Dating serves a slightly older demographic, including many widowers and divorcees.

Free members can create a profile on Encounters Dating, add up to 10 photos, and read messages in their inboxes. No subscription is required to browse the site, but a one-month subscription (starting at £32) gives you more communication options. Paid subscribers can send and read unlimited messages as well as view invitation-only photos, sort search results, and search messages by keywords. Plus, for a premium fee, you can widen your dating pool even further by allowing free members to send you messages.

In the straightforward layout of the platform, it’s easy to find people to engage in a flirtatious conversation. You can see who’s viewed your profile, who’s currently online, which members are celebrating a birthday, popular male and female members, as well as new members.

Another key feature of Encounters Dating is the enthusiastic team working behind the scenes. “We have a top-notch customer service team that guides users through every stage of their journey,” Emma said. “And we’re very proud of that.”

A majority of Encounters Dating members are adults hoping for a second shot at love. The dating platform gives mature singles the opportunity to mingle and form lasting relationships. “There’s nothing better than hearing the stories of people using our services,” Emma said. “Our success is not just page impressions and statistics — it’s helping people and changing people’s lives.”

Emma herself found love online, so she knows how impactful that experience can be. “I met my husband through one of our dating websites. We never would’ve met otherwise,” she told us. “It helps to have that personal connection because, if you’re going to talk the talk, you’d better be prepared to walk the walk.”

“Thank you for enabling me to meet the love of my life. We are so happy together.” — Anita, an Encounters Dating subscriber

Encounters Dating boasts hundreds of success stories from members who found a long-term relationship thanks to the user-friendly features of the site. “A very successful site,” wrote Brenda in a testimonial. “I found my perfect love on the second day of being a member.”

After meeting on the site and dating for eight years, David married Anne Marie at the Dunstable Registrar Office, and they celebrated at the restaurant in Luton where they’d had their first date. “She’s my perfect match,” David said of his wife. “The best thing that ever happened to me.”

Hundreds of members join each week, and a majority have been referred to the site by someone who had a pleasant experience on Encounters Dating. Members feel confident using a dating brand backed by trusted newspapers in the United Kingdom, and the high referral rate speaks to that level of trust.

“We still laugh and spend as much time together as at the start,” commented one married woman who found her partner of 11 years on the site. “Encounters Dating definitely works!”

Encounters Dating gives singles access to a network of serious-minded date prospects. Since 2005, this dating site’s powerful algorithms have proved adept at pairing up compatible members in long-term relationships.

If you’re looking for a reliable dating platform in the UK, you can join thousands of free and paid subscribers on Encounters Dating. Creating a profile is free so you can explore the site at no cost. The dating platform’s straightforward search and matching features allow you to find date prospects quickly and safely. In a few clicks, you might just meet your own Holly Golightly or Paul Varjak to spend the holidays with.

A supportive team backs you up all the way on Encounters Dating. “When you work for a dating site, it’s not just a job,” Emma said passionately. “Encounters Dating is about so much more than that. We’re changing people’s lives.”