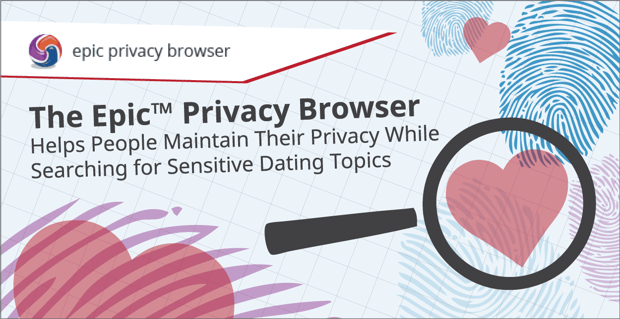 The Short Version: Since 2013, the Epic privacy browser has offered a comprehensive solution for privacy-conscious people of the world. This secure web browser blocks ads, deletes browsing histories, and protects users from sophisticated data collection processes, including ultrasound signaling and fingerprinting. If you have a sensitive question about sex, dating, or relationships, you can use Epic to get the answers you need without sacrificing your personal privacy online.

Epic, a Chromium-based web browser, launched in August 2013 to uphold the right to online privacy by blocking ads and data trackers. At the time, a lot of people didn’t really understand why that was important. Online privacy simply wasn’t on their radar, and it certainly didn’t seem like a huge problem.

Even if they knew that websites were tracking them online, most consumers thought of it like a surveillance camera in a store. Sure, it’s watching you, but it’s only an issue if you’re planning to steal something.

Epic’s Founder, Alok Bhardwaj, said most people would laugh when he told them he wanted to protect consumer privacy on the web. “I have nothing to hide,” they’d say, “so what does it matter?”

Then in 2013, Edward Snowden blew the whistle on NSA spying on emails, video chats, and other online communications. Later in 2015, hackers exposed the names and addresses of 39 million Ashley Madison users. Finally, in 2016, we learned that Facebook had shared the personal data of 50 million users with Cambridge Analytica, a political data firm working for Trump’s 2016 election campaign. Suddenly people stopped laughing and started paying more attention.

As one of the world’s first private and secure web browsers, Epic welcomes this new consciousness among online users. The web browser encrypts user data, blocks ads and trackers, and deletes all search and browsing history at the end of each session. That way, users can keep their personal lives to themselves.

“Recently, there’s been a lot more interest in online privacy,” Alok said. “People seem to get it now, and that’s been great for us.”

There’s No Browsing History & No Way to Track Your Movements

Epic’s private features can help people conduct their searches for dating-, sex-, and relationship-related issues in total privacy. The web browser automatically deletes all browsing history at the end of each session, and it also stops websites and data collectors from tracking the users as they jump from site to site. Epic stops over 600 tracking attempts during the average browsing session.

“When you close the browser, we delete all your data and all cookies,” Alok said. “That way, anyone looking will have no idea what you were up to.”

Thanks to Epic, users can explore fetishes, get information about STDs, and join dating sites without their online activity becoming public knowledge.

The Epic team employs a highly sophisticated system of blocks to keep hundreds of data collectors, government agencies, and online companies from snooping on its users. The web browser can shield users from ultrasound signaling, cryptomining, fingerprinting, and other advanced tracking methods.

Epic’s job is to stay one step ahead of the data collectors, and that’s something the team takes very seriously. “Data collectors are coming up with increasingly clever ways of tracking people across browsers,” Alok explained, “and we find clever ways to block them.”

A Convenient & Clean Interface With Tons of Useful Features

Epic appeals to privacy-conscious people of all ages and backgrounds. The web browser has over 1 million users across 150 countries, and it’s still growing.

In many cases, Epic runs faster than other web browsers because it doesn’t have to take time to load ads or run tracking scripts behind the scenes. Epic’s high-speed performance and proactive security features have earned positive reviews from Lifehacker, TechWorld, and other media outlets.

Alok said one of the biggest challenges of running a privacy-conscious web browser is balancing privacy with convenience. Many users have grown used to the built-in perks of stored personal data (i.e. remembered passwords and autofilled searches), and they expect a similarly streamlined and user-friendly experience when they browse Epic.

The Epic team sometimes has to think outside the box to create expedient solutions for its users. For instance, the browser recently released a local address bar autocomplete to ensure users don’t have to type out the entire web address every time. Epic draws from a list of 10,000 of the most popular websites to intuit which site the user is interested in visiting.

Epic plans to release a mobile browser in 2019 to make private and secure web browsing even more convenient and accessible to everyone.

“Our goal is to keep adding more servers, keep growing, and keep running as fast as possible,” Alok said. “We need to build new relationships to support future growth.”

Backed by a Devoted Team of Developers

Epic is founded on the core belief that personal privacy is essential to personal freedom. This web company isn’t just out to make a profit — it’s out to shape the future of the digital world and reinforce the right to privacy for everyone everywhere. It’s a big idea, and it’s backed by a handful of hardworking individuals.

Alok runs a team of passionate developers who are proficient in C++ and truly believe in the importance of online privacy. These people come from eclectic international backgrounds but share a common purpose and vision.

“We generally keep the team pretty lean,” he told us. “We look for people who have a strong commitment to our mission to protect online privacy.”

As a fast-growing online company, Epic has to stay limber and adapt to new developments and challenges in the digital space. Alok said the work environment can be pretty intense because the team is constantly making upgrades, bolstering security, and working to improve the web browser. These coders work independently and on small teams to fix bugs and streamline the product, making it a greater resource for users around the world.

Every day, Epic receives positive feedback from users who rely on the browser to support their private existence on the web, Alok said. These thank-you messages motivate the team and remind them of the impact they can have on people who want and deserve the freedom to do as they please online.

When Epic launched one of the world’s first privacy-centric web browser in 2013, many people didn’t yet recognize the need for its proactive, protective tools. Now, after years of surveillance scandals and data breaches, we all know better.

Epic became a leader in online privacy before it became a hot-button issue around the world. The web browser has grown by leaps and bounds as online consumers have become more conscientious of how data flows on the web and the potentially negative repercussions of that data-gathering system.

Today, over 1 million people choose Epic as their web browser of choice. They trust the browser to keep their secrets and protect their data no matter where they go online. Epic fosters a liberating, judgment-free space where people can ask sensitive questions, explore taboo topics, and browse wherever they please, safe in the knowledge that no one is watching.

“Your web browser is really important. It’s where you spend most of your time,” Alok said. “More and more people want to have more than two or three choices, and they want privacy online, and that’s what we provide.”