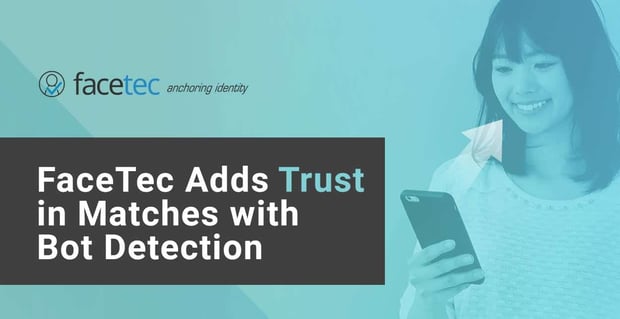 The Short Version: FaceTec uses the power of 3D AI user authentication technology to eliminate online dating fraud on social apps and many other high-risk online environments. Identity fraud has long stood in the way of people fostering genuine love connections and building trust with matches online. FaceTec provides identity security on dating app platforms and positions itself as the brick wall between bad actors and online daters. Through quick, easy, and secure selfies, the company’s technology allows singles to verify their identity to avoid bots or scams, allowing dating apps to become safe sources of real love connections.

“Catfish” and mainstream TV shows have highlighted the potential hazards of online dating. Online profile fraud takes the certainty, safety, and fun out of using dating apps, making many singles understandably wary of using them to discover casual or serious relationships. Instead of showing up to a romantic date night, many people leave confused and deceived by someone who doesn’t look or act anything like what they’ve presented in their profile.

But sometimes these fraudulent profiles aren’t even real people. Yes, unfortunately, bots have infiltrated some online dating membership bases. And these culprits may be even trickier than catfishing.

Social media platforms that allow spam bots on their applications do a fundamental disservice to singles with genuine intentions. The boost in metrics may look beneficial in the short term, but it opens the door to potentially disastrous future problems. Fortunately, FaceTec CEO Kevin Alan Tussy told us many major companies are beginning to abandon this outlook.

“FaceTec stands ready to empower social media with 3D Liveness detection to ensure that only real humans are allowed on the platforms,” said Kevin.

Founded in 2013, FaceTec created technology built to prevent online identity crimes. The FaceTec team trained its AI to recognize and authenticate real humans with millions of digital and physical spoof artifacts, including high-res photos and videos (including thousands of deepfakes), mannequin heads, and life-like masks, in addition to stopping more sophisticated, scalable attacks like camera hijacking.

FaceTec has grown to become the world leader in 3D Liveness and Matching software that is now used on six continents, not only in large social networks, but also in banking and finance, major ecommerce, government, crypto currency and wallets, e-voting, and many other high-risk online environments.

FaceTec’s software has already made millions of online dating experiences easier and safer, and currently processes more than 700 million-and-growing 3D Liveness checks around the world on an annual basis.

“We work with many of the largest dating apps and eCommerce sites in the world to stop catphishing, fake accounts, and fraud,” said Kevin.

Online dating apps can leverage FaceTec’s capabilities not only for better security, but to simplify the identity verification process. Onboarding, in many cases would only require daters to take a short video selfie that verifies 3D Liveness and can then compare their image to their official photo ID. After onboarding, the user will re-authenticate every time they log in again with a Liveness check and will match their face to a “FaceMap,” a secure digital version of their image.

The entire process only takes a couple of seconds and can be done on any modern phone, tablet, or computer. To prevent bad actors from ever using the user’s biometric data even if there is a breach, the Liveness data is always deleted immediately after the user is verified and the images they acquire are always converted into encrypted data. Without the Liveness data – required by the system to allow account entry – it is not possible for anyone but the legitimate user to gain access.

As a verification tool, 3D can acquire up to 100 times more biometric data, providing far higher levels of certainty. Whereas 2D selfies are easy to get, and all over the internet. Bad actors have been taking advantage of 2D solutions that do not have the ability to make authentication decisions with nearly the same confidence, opening the door to identity theft.

FaceTec also stops bad actors from creating multiple fake accounts with a “1:N” (one-to-many) search, which compares a new user’s biometric data with other accounts already in the database. FaceTec advanced 3D Liveness and Matching technology prevents them from setting up another account, and the dating site can even create a repeat offenders list to prohibit them from ever making new accounts with their faces, and under any name.

A Bounty Program to Defeat Spoofs and Bots

Hundreds of large, private and public security-conscious organizations use FaceTec to provide high levels of security for their users. An important reason is, in addition to years of development and proving their technologies in the real world, the company created the first and only “spoof bounty” program that opened their software to the scrutiny of the world’s white-hat hackers. The bounty program invites attacks on its software to help uncover any unknown vulnerabilities in its Liveness AI, allowing FaceTec to target and patch issues before a customer or end user is ever affected.

Hackers can be rewarded with up to $200,000 through the bounty program by beating any or all of their five different levels of attacks. The attack methods start with three levels of non-human “artifacts” such as masks, high-resolution photos or videos, and 3D mannequin heads, which can potentially fool authentication systems by providing positive liveness results.

Next-level, highly sophisticated and scalable “bypass” attack methods include decrypting and editing the contents of a 3D FaceScan to contain synthetic data that wasn’t collected from the session, and a camera feed “takeover” where previously captured video frames or deepfakes are injected to fool the system into a Liveness Success response.

Since the bounty program launched in 2019, hackers have helped FaceTec successfully defend more than 140,000 spoof and bypass attacks, raising the bar for biometric security for social media.

FaceTec also helps educate the public on its website Liveness.com. Visitors can learn about the history of liveness, understand spoof and bypass threats, and see how liveness verification protects users, among other resources.

Setting the Stage for the Future of Online Dating

No one wants to feel unsafe while dating, and trust is key to forming relationships. FaceTec technology enables that trust by providing dating app companies a secure and safe environment, and ensuring that the people they help match up are who they say they are, and will more truthfully represent their profiles.

While FaceTec’s robust solution addresses critically important security concerns vital to inherently problematic dating and relationship apps, there are still many opportunities for dating app companies to provide safe and secure environments. As Kevin states, “… we have been disappointed that more social media companies haven’t been proactive in seeking out our privacy-preserving, on-prem 3D Liveness, and Age Check capabilities.”

The future of online dating depends on authentic identities. If daters are afraid and unsure, it can spell trouble for the industry. FaceTec stands ready to defeat spam bots, authenticate real humans, and protect end-user privacy in remote access systems for generations to come.

Lynn Cadet is a dedicated feature writer for DatingAdvice.com, and her articles have been shared and posted across the web. She has work experience in online content and media relations. Her passion for creative writing has led her to work collaboratively with professionals in the tech and lifestyle sectors. Lynn aims to create inspiring, relatable, and informational pieces on all things dating.