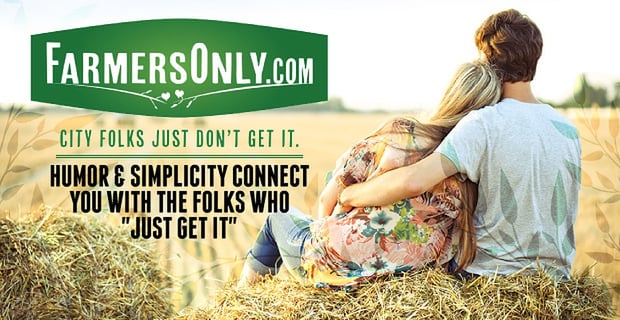 FarmersOnly: Humor & Simplicity Connect You With the Folks Who “Just Get It”

The Short Version: For single farmers looking for love, “City Folks Just Don’t Get It”, but FarmersOnly.com does. As the first dating site for single farmers, cowboys, and people living in rural areas, FarmersOnly has addressed the needs of millions to become the leader in the niche dating space — all thanks to the drive of Founder Jerry Miller, a passionate team, an eye for humor, and a simplified online dating process.

With the frank slogan “City Folks Just Don’t Get It” and a familiar jingle — even played at the Country Music Awards — FarmersOnly.com is the most popular dating site in the niche industry. And for good reason.

With more than 4 million users and counting since its 2005 launch (compared to other niche dating sites that have only about 20,000 members), FarmersOnly is answering the demands of so many singles out there, and not just farmers.

“FarmersOnly has become a brand for a type of person,” said Founder Jerry Miller. “Sure we have a tremendous number of members involved in agriculture, but it’s also spread to people who just live in rural communities, are animal lovers, people who are into being outdoors under a blue sky instead of in a cubicle under a fluorescent light.”

We sat down with Miller to hear more about the inspiration behind FarmersOnly, as well as how it’s putting the fun and ease back into online dating and showing other niche sites how it’s done.

Recognizing a Problem, Addressing It & Offering a Solution

Miller, who grew up in a rural area of southern Ohio and spent most of his childhood outdoors, got the idea for a FarmersOnly-type dating site in 2005 when he was working at an advertising agency. One client in particular was a recently divorced farmer who confided in him about her dating woes.

FarmersOnly became a pioneer in the niche dating industry thanks to its initiative.

Not only was she living in a small community where everybody knows everybody, but she didn’t feel a spark with any of them. She worked 24/7 and didn’t have time to go out and meet new people. After joining a mainstream dating site, she had little luck because she was matched with big-city guys who had a hard time understanding her lifestyle.

“Most people are into the 9-5, Monday through Friday and can’t relate to the life of a farmer at all,” Jerry said.

So he set out to help this woman find the right dating site for her — only there wasn’t one. Jerry started talking to other single farmers and kept hearing the same story. He realized a problem needed to be solved, and he was going to be the one to do it.

Six months later, he launched FarmersOnly.com. Soon the word spread, and FarmersOnly has been growing, even reaching singles in Canada.

Dorian and Mary met on FarmersOnly.com and got married in 2013.

“My initial thought was right. There’s definitely a need for it. Now we have more than 4 million people who have signed up, and there aren’t even that many farmers in the country,” he said.

Thousands of people have found love on the site and expressed their gratitude to Jerry.

“Over the years, the number of emails that have come in saying ‘Thank you so much. We met on FarmersOnly, and we’re so happy’ — it just keeps on ramping up,” he said.

“City Folks Just Don’t Get It”: The Power of Humor

From a catchy motto to clever ad campaigns like “Find Your Prince Farming” to more than 15 amusing commercials featuring “The Riding Date”, “The Fishing Date”, and more, humor is a big part of FarmersOnly’s brand. Being single is hard enough as it is, so Jerry thought it was important to keep things light and remind people that online dating can be fun.

“People don’t realize how devastating it is to be lonely, and I’ve always tried to keep FarmersOnly fun,” he said. “It’s fun to meet somebody new. The part about dating that I love is the discovery.”

FarmersOnly’s personality also shines through on the blog, which includes articles like “Friday Farm Fact” (did you know California produces more flowers than any other U.S. state?), and online store, which includes T-shirts, mason jars, and other “thingamabobs” with cute sayings like “No truck? No luck.” Being positive and relatable is what keeps FarmersOnly connected to its users.

Technology Made Easy: Plow the Field While Finding a Date

While other dating sites have extensive questionnaires and complicated algorithms no one really understands, FarmersOnly keeps it simple with features, an interface, search capabilities, and a matching system that are just as straightforward as its members.

“I tried to keep FarmersOnly simpler. I didn’t want a couple hundred questions you had to fill out,” Jerry said. “I wanted to keep it more streamlined with only the important things.”

FarmersOnly keeps things simple and focuses on only the most important features.

Those important components include:

For more details like what types of movies or music someone likes or if they’re shy or outgoing, Jerry recommends doing it the old-fashioned way: just ask them. Which is what makes dating fun in the first place.

“It gives you a good snapshot, but again I believe the most important part of meeting someone is the discovery process,” he said. “I’ve always said if you know 10 or 20 facts about someone before you start a conversation, that really helps. But if you know hundreds of facts, it kind of kills the discovery.”

What’s truly great about FarmersOnly is how they stick to what works while still being able to adapt to users’ ever-growing needs, including providing a satisfying mobile experience. Not only is the FarmersOnly experience on your phone just as clean and simple as it is on the desktop, but there’s also the FarmPhone texting service that lets you send and receive text messages from other members without having to log into the site or reveal your phone number to them.

“Now with mobile technology, high-speed Internet access, and Wifi in rural areas, it’s just changed everything. We want FarmersOnly to be very easy to use on mobile,” Jerry said. “We get emails all the time saying ‘I’m plowing my field while I’m looking for a date.'”

Jerry and his team started FarmersOnly with a simple intention: to help single farmers find that special someone who gets them, understands their world, and wants to share a laid-back life together. That mindset, along with consistent creativity, genuineness, innovation, and dedication, has led to thousands of happy couplings and a successful and well-respected brand in the dating industry.

“The secret to success is two things: surround yourself with good people and know your customers. We do both. It’s not just a job — it’s a passion,” he said.

FarmersOnly’s lighthearted yet caring attitude and ability to get at the heart of what their users really want has shaped what it means to be a niche dating site and a great dating site in general. When you love what you do and put people’s happiness first, everyone wins. So try FarmersOnly today — you never know who you’ll discover.