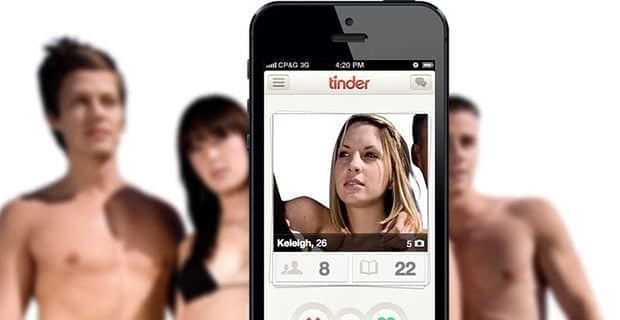 Here in the online dating world, it’s common knowledge that Tinder is the spawn of the makers of Grindr.

By now you’re probably aware of Tinder, but if you’re heterosexual, there’s a good chance Grindr hasn’t been on your radar.

Grindr is a notorious hookup app. I met one of the founders of the app and he was very open about it.

It spawned from a problem many gay men had in finding partners while out and about in public and not knowing who was gay and who wasn’t. Grindr bridged that gap by bringing up matches who were gay, ready to party and hyper-local to your location. It was a hit.

Then they made Tinder, a heterosexual app.

But the question on many people’s minds is, “Is Tinder supposed to just be for hookups, too?” Since Tinder is just an app, there’s no mission statement to tell you how you should use it.

It’s rumored one of the founders stated that Tinder wasn’t hookup-oriented since women were less likely to look for hookups than men.

A gay man once told me that when it comes to sex, men are the gas pedals and women are the brakes. “Imagine two gas pedals together,” he said.

While it may be a stereotype and a generalization that women are less inclined to seek hookups, maybe it’s true — maybe Tinder is too full of “brakes” for it to ever be a straight hookup platform.

I find the average straight dater has no idea what Grindr even is, or its association with Tinder, and therefore has no preconceived notions of what the purpose of the app is supposed to be.

“Tinder has a lot going

for it for a lot of reasons.”

I get asked “Is Tinder just for hookups or what?”

The great thing about Tinder taking off as huge as it has means that all kinds of people have joined: those curious, those seeking only action, those who don’t want to try computer-based online dating, those who like the functionality, those looking for relationships.

One thing that makes me think it’s not a straight hookup app is the fact it links to your Facebook. Hooking up seems better when it’s closer to anonymous, when you don’t have friends in common who can tell tales.

While on Tinder, I came across a man who had a mutual friend with me on Facebook. This made it disgustingly easy to find out he was actually married.

I think Tinder has a lot going for it for a lot of reasons, regardless of the hookup parentage via Grindr.

The shared Facebook friends and shared Facebook interests point to setting foundations/conversations for commonality, which is a key to creating relationships more than just hookups.

Is it very game-like and superficial?

YES. You get to see a bunch of new potentially interested faces in an instant. It’s addictive.

It’s designed to show you the next new face over the ones you’ve already matched with, which makes it more unlikely to seek out lasting connections. It’s a potential ego boost for those who are on the receiving end of a lot of right swipes.

I know many women enjoy Tinder over traditional dating sites because the only men who can contact them are the ones they’ve already given “permission” to since it requires both users to swipe right.

This eliminates a lot of what women feel is creepy about online dating: getting unwanted messages from men they aren’t interested in.

For men, it can be a game of just getting to see hot chicks, which many men find enjoyable in itself. It can be difficult to get women to swipe right on them, so they may literally swipe right on every woman they come across just hoping one will reciprocate.

For some men, Tinder is great in the sense that they don’t have to list any information about themselves that can potentially get them dismissed by women on traditional dating sites.

For example, height, income, education and employment are things women have no knowledge of unless men volunteer it on their Tinder profile.

As a result, many may find themselves getting a chance at women they wouldn’t get access to otherwise.

So what do you think? Are you on Tinder just for the hookups?