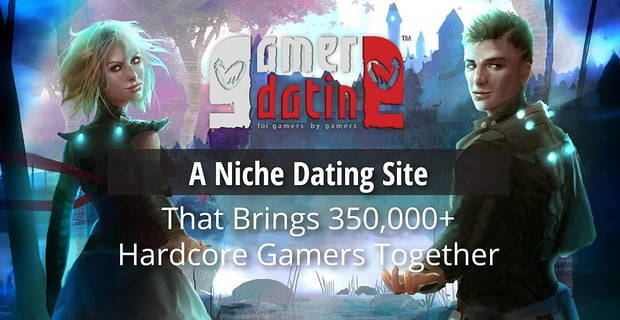 The Short Version: GamerDating.com is a game-changing dating site designed to connect hardcore gamers who are single and looking for the Princess Peach to their Mario, or vice versa. This platform uses a curated matching system to recommend dates with similar gaming preferences, relationship goals, and personality traits. GamerDating currently has over 350,000 users, and it’s rapidly growing in the U.S. and abroad.

A few years back, a friend of mine turned 26, and he wasn’t happy about it. He and his high-school sweetheart had recently divorced, he was living alone, and he didn’t feel optimistic about the future.

Instead of a big birthday bash, four of us went over to his sparsely furnished bachelor pad to drink beer, play “Super Smash Bros,” and try to lift his spirits. “I just don’t know if I’m ever going to find someone else,” he said with a sigh at the end of the night. Then we all fell into a group hug.

A month later, however, my friend was singing a different tune. He’d gone to a video game meetup and met a gamer girl who was perfect for him. Their gaming styles instantly synced up, and they were living together by the end of the year. Today, they’re one of the cutest couples I know.

The international gaming community can help singles make valuable connections through the games they love. A niche dating site called GamerDating is leading the charge to encourage hardcore gamers (who spend four to eight hours a day playing games) to meet, date, and fall in love. Since 2011, this niche dating platform has connected over 350,000 users in the U.S., the U.K., Canada, Denmark, Poland, and other countries.

It’s free to join GamerDating and search for dates, and paid subscribers can send messages. Subscribers also receive a free game along with their monthly membership plans.

Thanks to its unique design, GamerDating has scored points with hardcore gamers and secured its place as the world’s top gamer dating site. This fast-growing dating network is on track to hit 1 million members by the end of 2019.

“Games are inherently social platforms, but everyone is anonymous,” said James Palmer, the Founder of GamerDating. “Our site offers a huge opportunity for core or hardcore gamers to meet one another. There are people on their consoles or PCs. This is the /r/gaming community on Reddit.”

A Passion Project Created by Gamers for Gamers

The idea to create GamerDating began with a bad relationship. From 2006 to 2009, a hardcore gamer named Alex Brown tried to make a relationship work with someone who thought gaming was childish and antisocial. She urged him to give up his beloved gaming PC and say goodbye to the long-distance friendships he had built while playing “Ages of Empires 2,” “Ultima Online,” “Call of Duty,” and other games.

James Palmer is an enthusiastic gamer who decided to launch a dating site to help singles like himself.

One of his friends, however, didn’t let go so easily. James Palmer had lost touch with Alex for a few years, but he came to visit his old roommate and game-mate in late 2008. “He was floored that I had no idea what was going on in the gaming world,” Alex recalled. “James’ shock sparked something in me that visit.”

After spending time with his friend, Alex went back to the gaming community and bought a new gaming PC. Soon he was fighting battles on two fronts. He would spend hours conquering on “Warhammer: Age of Reckoning,” and then he’d have to endure a reckoning with his disapproving girlfriend. In the end, the strain was too much for them, and they broke up in 2009.

Alex said he realized that he needed to do what made him happy and find a partner who supported him and could join him in his adventures. Of course, as many guys out there know, finding a gamer girl is easier said than done.

After going through a bad breakup, Alex Brown sought a gamer girlfriend who could appreciate his passions, hobbies, and friendships.

Sitting on the floor of their London flat, Alex and James went looking for a dating site for gamers like themselves, and they came up empty-handed. They couldn’t find a place where gaming and dating lived in harmony, so they embarked on a mission to create it themselves.

“We decided to make a dating site for gamers. It was the first of its kind,” James said. “We’d never built a business before, but it just felt right — it felt like the right thing to do.”

Their first task was to find the perfect domain name. James said he liked the name GamerDating because it says exactly what it is. It happened to be for sale, so they bought that domain for around $400 and began building a platform to live up to the name. Its beta version gained over 5,000 members with no advertising. GamerDating is officially launching in 2019 and has been in beta since 2015, but is fully functional.

Alex now has a lovely gamer girlfriend who enjoys tabletop RPGs and LARPing, and he and James work hard to ensure that other gamers can discover the joys of dating someone who shares your geeky enthusiasms.

The Match Dating Rating Can Score Your Compatibility

GamerDating is a platform-agnostic dating site — meaning it doesn’t matter what gaming company, console, community you enjoy most. Whether you’re a die-hard World of Warcraft player or a fanatic “MarioKart” racer, you can join this gamer network and meet singles who share similar geeky enthusiasms. GamerDating users can showcase their three favorite games on their profiles to let potential love interests know how they like to spend their time.

The niche dating site appeals to gamers with carefully crafted search and match features. This isn’t a heartless white-label dating site with one-size-fits-all run-of-the-mill tools. James and Alex have put considerable thought into building a platform that helps singles level up to a relationship as quickly and efficiently as possible.

GamerDating employs a unique matching system that takes many personal factors into account. The site calculates compatibility based on the user’s location, age, gender, and other standard criteria, but it also includes gaming preferences in its calculations. The algorithm then generates a compatibility score from zero to 400 and offers a Match Date Rating (MDR) on each profile to let users know how they stack up against one another.

Profiles in the Gold League are highly compatible with your profile, so you should consider hitting the Mushroom icon (which serves as a like button) or sending a message.

The Diamond League is the top tier and indicates an incredible level of compatibility across the board. James said that in all the time he has browsed GamerDating, he has never encountered a Diamond League for his profile. It’s rare, as it should be, and that makes it all the more exciting for users who find that perfect match.

In 2012, James and Alex set out to build a useful, effective, and gamer-specific dating environment, and they have gone to great lengths to ensure GamerDating attracts hardcore gamers and blocks spammers.

From the moment you sign up, it’s clear that GamerDating values authenticity. Its strict photo guidelines and in-depth signup process allow quality members to highlight their personalities. New users must state their relationship goals, social habits, gaming habits, and other relevant details on their profiles. All GamerDating profiles are rich with information, and that helps the site’s matching algorithm identify true compatibility.

“One of our core principles is you can’t be fake,” James said. “It has to be you. You have to have a picture of your face, not an avatar, because no one wants to date a fantasy of somebody — that’s catfishing.”

A passionate six-person team makes sure GamerDating is a safe and fun online environment.

Catfishing is a huge no-no on GamerDating. It’s game over for anyone who misrepresents themselves on this dating site. The moderators seek and destroy fake profiles on a daily basis. Users can click the red flag icon to report someone they perceive as suspicious or harmful, and they can block anyone at any time. These actions help the moderators quickly identify the bad apples and root them out so the dating site remains a safe and friendly place to find a date.

“We hate spammers. We hate fakers,” James told us. “If you’re fake on GamerDating, you’re dead. We’ll blacklist you.”

GamerDating is committed to generating real conversations between authentic gamers, and it does not tolerate unsavory characters. You can read more about its terms of use here.

Level Up Your Love Life on GamerDating

My friend thought he was out of the dating game for good after his divorce, but it turned out he had a second life and a chance to start again. He’s now happier than I’ve ever seen him — even when his girlfriend beats him at Smash — and it’s all thanks to the gamer community.

GamerDating’s global network has helped thousands of singles, like my friend, on their quest for love. These hardcore gamers share common interests and hobbies, so they naturally forge strong relationships with one another.

James and Alex have spent years considering the needs of single gamers and designing original matching features to foster deep connections. Looking to the future, the GamerDating team seeks to grow its international foothold and continue recruiting members in North America, Europe, Asia, and beyond.

“We don’t think there’s anybody who could do this better than us,” James said. “GamerDating is all about being authentic and finding the right person. We want to represent you and the games you love.”