Hinge Review: Pros & Cons of the App Plus 3 Alternative Choices

Our Hinge review can tell you everything you need to know about this quality-driven dating app — and some other alternatives if it’s not quite your thing.

Hinge is incredibly convenient for those of us who keep our smartphones with us for 87% of the day. With Hinge in your pocket, you can go about your day while it delivers new matches and messages without missing a beat.

In terms of dating, Hinge is one of the most efficient and reliable apps available. Also known as “The Relationship App,” Hinge is on a mission to make dating fun, simple, and meaningful again. Our dating experts are confident it works because they know couples who met on Hinge and are now married.

Of course, we recognize that Hinge may not be for everyone (i.e. casual daters), so we’ve also included some other choices that we think are on par with Hinge.

Since its 2011 launch (at that time it was just a web app), Hinge has become the anti-Tinder, foregoing swiping and a hookup environment in favor of a more commitment-oriented environment. The latest stats from GlobalDatingInsights show that 63% of Hinge users want a relationship (vs. 33% who want dates, 2% hookups, and 2% something else). After all, that’s what it was made for — it was designed to be deleted. 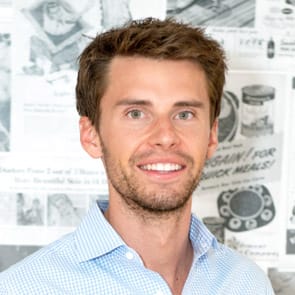 Justin McLeod is the CEO of Hinge, the self-proclaimed anti-Tinder app that strives to remove the game-like qualities of mobile dating and help singles make genuine connections instead.

“We’ve swiped left on swiping,” the company wrote in an email to TechCrunch. “Dating apps have become a game, and with every swipe, we’ve all moved further from the real connections that we crave.”

As of 2013, Hinge had 60,000 users. We assume those numbers have increased since then, but the team seems to be pretty tight-lipped about it. The site itself sees over 180,000 visitors a month, and the app has 4.5 stars on iTunes.

In terms of success, we’ve learned that Hinge has created over 1 million matches, and it is responsible for arranging over 35,500 daters per week.

If we’re talking about location and age, Hinge is available in 28 countries and about 90% of users  are between 25- and 35-year-olds. The app tries to keep users engaged in the dating process until they find The One. According to CEO Justin McLeod, 85% of new users are still active a week after joining and 75% are still active a month after joining.

Enough with the numbers, though — let’s get into the nitty gritty of Hinge. Here are several pros, as well as a few cons, that we found when testing out the app.

You can download Hinge for free via the App Store and Google Play. You must have a Facebook account because that’s what the app uses to fill out your profile and select photos.

Hinge also uses your Facebook information to send you matches based on your friends of friends. As a result, potential scammers are more likely to be weeded out, and you might feel more comfortable with people who share a common friend group or social status. 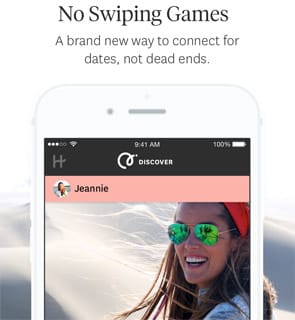 Hinge will deliver 10 matches a day, and you can like 10 members every day — for free.

Every day, Hinge will send a curated list of suggested matches to your Discover section, and you can either like them or move on. If you want to express your interest, you must comment on or like one of their photos or part of their Story (e.g., answers to questions such as “What are you listening to?”). To see who’s commented on your photos or Story, go to the Likes You section.

This type of communication system allows singles to make decisions based on more than appearance and start conversations more naturally.

Hinge doesn’t have all of the control, though. Free members can browse for matches by gender, location, age, distance, height, ethnicity, and religion. Paying members ($7 a month) can browse using those filters and determinants such as children, family plans, politics, and drinking, smoking, marijuana, and drug use. Free members can also send 10 likes per day, while paying members can send an unlimited number of likes.

A preferred membership will also give you access to the Hinge Insiders, who will share “data-driven insights, profile optimization advice, tips to engage in the best conversation, what prompts and photos perform well on the app, and anything else.”

Hinge has a lot going on in the looks department, too. The interface is clean and intuitive, especially if you’ve used other dating apps before. Your Story includes six photos and three answers to Hinge’s questions, and there are clearly labeled icons for everything such as a speech bubble for sending messages, a pencil for editing your Story, and an eye for hiding and showing certain pieces of information.

Cons: Can See the Same Matches Over & Over Again

We’re fans of Hinge, and really the only complaints we could find about it is some people didn’t like when they were given matches they already had. Hinge has a small dating pool, and it does recycle matches sometimes to make sure you are still not interested. We don’t think it hurts to give someone a second look, so that’s not too bad overall.

The FAQ section of the site says to tap the X icon if you want to move past someone and tap the three dots at the top right of their Story to permanently block or remove it if you don’t ever want to see them again. Choose wisely!

Hinge is filling a much-needed hole in the dating app space — particularly for relationship-minded singles who are sick of wading through the saturation of hookup options. But Hinge isn’t the only one doing this. We’ve got three other apps we want to recommend and take you through, and they’re all great for finding something more serious.

Compared to Match, which was created in 1995, Hinge is a new kid on the block. Not only does Match have history on its side, but it also has the numbers: more than 30 million members and more first dates, second dates, relationships, and marriages than any of its competitors.

Get the app from iTunes or Google Play without paying a penny, and then swipe for matches. When someone catches your eye, view their profile and photos, add them to your Favorites, like them, and send them a virtual wink.

A majority of Elite Singles’ user base (if not all of its user base) are looking for a long-term commitment, so you can rest assured that you won’t be wasting any time on the app. Elite Singles also has a fraud detection system that helps keep hackers at bay.

If education is another characteristic you constantly look for in a partner, Elite Singles could be the app for you. Over 80% of users have a higher education degree (bachelor’s, master’s, doctorate, etc.). And the odds are ever in your favor — 2,500 people on Elite Singles find love on a monthly basis.

Zoosk has one of the best mobile experiences around. Similar to Hinge, it’s integrated with Facebook (and Google+), so you can sync up an existing profile and create an account in seconds. However, Zoosk doesn’t require you to do this. You can simply sign up on your own without using social media. If this is the route you take, you’re given matches who are outside of your Facebook or Google+ circle. Zoosk has 38 million members, so the pool is definitely bigger.

Another upside to Zoosk is it’s available for free on both iOS and Android devices, while Hinge is not. The main place to find matches on Zoosk is the Carousel, and there should be no confusion about the choices you’re making. Click the heart graphic if it’s a yes, the X graphic if it’s a no, and “Maybe” if it’s, well, a maybe.

Hinge: A Favorite for Serious Daters, But It’s Not the Only One!

We’ll admit that we’re among those people who have their phones with them for 87% of the day (maybe more), so having apps, like Hinge, makes a world of difference in how much we can multitask. The user base may be somewhat small, but that’s what the alternative apps are for. Take a test-run through all of them (How can you resist free?) and see which one fits your lifestyle best!

How Does Tinder Work? — Plus 3 Alternatives

Snapchat: The Future of Digital Dating or Just a Dirty App?