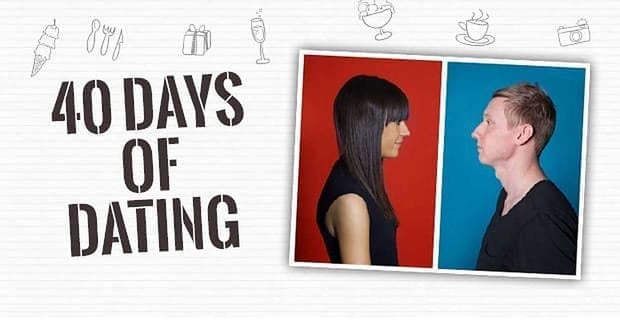 How the “40 Days of Dating” Experiment Affected Millions of People

TL;DR: In the first social experiment of its kind, 40 Days of Dating chronicles the incredible journey of Jessica Walsh and Timothy Goodman, two best friends who decided to date for 40 days. What happened along the way will change the way you think about relationships from here on out.

Her: a hopeless romantic who jumps into relationships too quickly

Him: a serial dater who’s afraid of commitment

What happens when you put the two together? You get 40 Days of Dating.

Having grown tired of the ups and downs of dating and being the only singles among their group, friends Jessica Walsh and Timothy Goodman, both designers living in New York, took matters into their own hands by conducting a one of a kind social experiment – they would date for five weeks and document each step of the way, from every joy to every frustration.

Not only did the pair learn more about themselves and each other during those 40 days, but their authentically honest and intimate journal entries act as inspiration to millions of people.

Going from friends to lovers

Having been friends for more than four years, Walsh and Goodman always found it amusing that they faced the opposite relationship problems and approached their love lives with totally different styles.

With that in mind, they took on the 40 days as somewhat of a personal challenge, a way to break bad patterns and become more self-aware.

“We wanted to explore our habits and fears and learn more about the nature of relationships and love,” Walsh said. “Also, as creative people, we love the process of making something provocative, and we were very excited about that aspect, too.”

So how do two people go from platonic to romantic? You first set some boundaries, which included:

From spa nights and 1920s-themed dates, to basketball games and a weekend trip to Disney, Walsh and Goodman did what most couples do. Yes, that includes holding hands, kissing and even having sex.

The duo separately kept track of every date, feeling, fight and more in journal entries, videos and illustrations. Once the experiment was over, Walsh and Goodman read the other’s accounts and published them side by side on the 40 Days blog.

“We were fascinated with the different perspectives on the same situations,” Walsh said.

Changing millions of lives with one experiment

While the romantic aspect of the experiment didn’t work out for the two, their friendship is stronger than ever.

Walsh said those 40 days helped them become more cognizant of their individual and united dating behaviors, but that time together also has made a significant impact on their current and potential relationships. (Walsh is engaged and Goodman is single and looking for a meaningful relationship.)

But it’s not just their lives the experiment changed.

Friends Jessica Walsh and Timothy Goodman dated for 40 days and blogged about the journey.

Since its launch, 40 Days of Dating has had more than 10 million visitors, with Walsh and Goodman receiving thousands upon thousands of emails from people around the world saying their story has made an impact on their lives.

“Some people say our story has forced them to reflect on their own relationships and has been a catalyst to make positive change. Others tell us how they found comfort in relating to our feelings or how it’s helped them understand the male/female perspective better,” Walsh said. “Others tell us it gave them the courage to seek therapy or gave them closure on past breakups. Others say it helped them pause in a busy world and reflect on their own behaviors and patterns.”

“One of the main goals I’ve had is to touch people in some way through my work, so receiving this feedback has been amazing and humbling,” she continued. “It’s why I consider it a success, and I want to do more work that involves a personal angle in the future.”

After reading the 40 Days of Dating stories, it’s clear Walsh and Goodman, who are currently working on a new social experiment that will be out next year, are two passionate and caring people whose work will always start a conversation, get people thinking and connect us all in some surprising ways.

“I think all too often all of us get caught up in our daily routines and patterns and don’t stop to question why we are doing what we are doing,” Walsh said. “So while I am not sure I recommend someone doing the 40 days experiment exactly, I definitely think its great to experiment and reflect and try to grow as a human.”

So if you’re ready to learn more about Walsh and Goodman’s adventure, start with day one. I promise you won’t be able to stop reading.

OkCupid Asks, How Monogamous Are You?

White Label Dating: The #1 Tool for Building a Dating Site

Sparkology: More Than Just a Dating Site; It’s a Movement