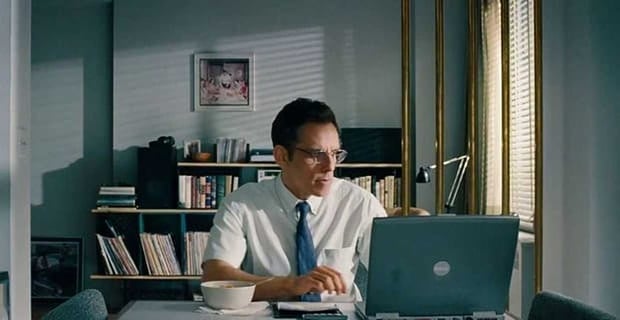 Do you think of yourself as a person living in doldrums? Are you going to have to be resigned to a life of solitude?

In the film “The Secret Life of Walter Mitty” (spoiler alert), Walter is a lonely negative asset manager (double meaning?) interested in a co-worker whom he knows is on eHarmony. He joins the site in an effort to contact her.

We see him as his finger-hovers over the mouse debating with himself to push the wink button at her. He finally decides he wants to wink at her but is foiled by a technicality, so he must contact eHarmony.

The eHarmony rep focuses on his barren profile and subsequent lack of any substance in his life to add to his profile.

While the Walter character may look to outsiders as a simple peon, where Walter is rich and virile is in his imagination. However, he knows an active imagination is not enough to impress the woman he wants.

He starts to take action

He takes action on his imagination rather than just leaving it in his head to zone out.

His action leads him on incredible adventures interjected with calls from his eHarmony rep in an attempt to fill out his dating profile.

Each time the rep calls Walter, Walter has some new incredible story of jumping out of helicopters and running from erupting volcanoes.

In the end, Walter builds up his courage to do things rather than just think them, creates a killer dating profile that gets all kinds of attention and ultimately gets the girl.

Do you relate to Walter Mitty?

Are you dreaming of a love life and adventures in your head but never moving beyond them? Have you abandoned dreams you once held?

It’s a common feeling that “life gets in the way” of some of our best plans. Here are three rules to get your online dating buzzing like a bullet out of shotgun.

1. Nothing happens if you don’t fill out a profile

This is rule one! Someone once told me “nothing comes from nothing.”

If your profile has nothing like Walter’s, it’s never going to get you anywhere.

Online dating offers a mirror to take inventory of your life.

For Walter Mitty, he was bummed at what he saw. His life had never paralleled his imaginations.

If looking at your online dating profile and feeling like you have nothing to add to it, add to your life and start there.

Which brings us to:

I believe every person has two modes: input and output.

Input modes are where and how you take things in. These are things like reading, observing, watching TV and imagining.

But every person should also actively make sure they have an output mode wherein they build, write, create, speak, go and actually do something.

But you need both. Don’t ignore the output because that is the only way others can tell anything about you. What you output is what makes people take interest in you.

Start listing what you output and from there comes the roots of your expansive online dating profile.

3. Get back in touch with your passions

Walter was a champion skateboarder as a younger man. He also once had dreams of backpacking through Europe.

He reconnects with both of these things to help point him toward what to do. These things help him have a love affair with life and interesting things start happening.

Keep this online dating rule close: If you want people to take an interest in you, you need to be interesting.

Give your dates something to get excited about you for.

An amazing byproduct of wanting to meet someone is that it gets you to do things you may not normally do.

It’s OK that a desire to meet someone propels you out of your comfort zone to try new things. If that’s online dating, it’s a fantastic start.

Take a cue from Walter Mitty and go find your Hollywood ending.

Does Your Online Dating Profile Need a Digital Facelift This Spring?