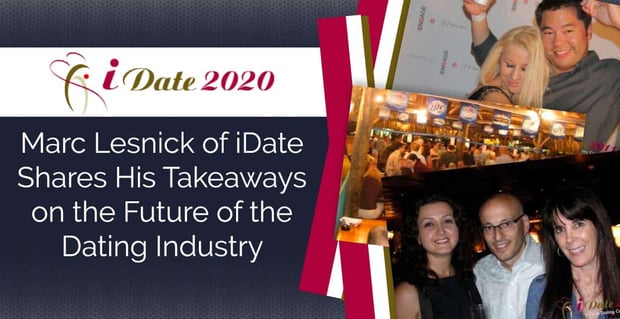 The Short Version: Since 2004, Marc Lesnick has organized over 50 iDate conferences around the world. These conferences give dating site operators, matchmakers, software companies, and other businesses a forum where they can discuss what’s going on in the industry and how they can improve dating services in the future. Marc has spent years conducting networking events and brainstorming sessions that have yielded many insights on the modern dating scene.

In 2015, the U.S. dating industry was valued at $2.5 billion, and experts have predicted it would grow to be worth over $3.2 billion by 2020. About 70% of this revenue is powered by dating sites and apps, which have exploded in popularity since millennials came of age. From 2013 to 2015, online dating usage tripled among young adults, and meeting people online has become more mainstream.

Today, nearly 40% of American couples say they met online, and that cultural shift has meant big things for the dating industry as a whole.

Attendees at iDate include marketing executives and CEOs.

Everyone knows the major players in the dating industry — Match, Tinder, eharmony, etc. — but there are over 8,000 other dating services seeking a piece of the pie as well. These businesses include tech startups with flashy ideas for a dating app and mom-and-pop matchmakers who promote quality-driven dating.

Their approaches may be different, but the ultimate goal of connecting singles while generating revenue is the same.

Back in 2004, Marc Lesnick recognized that dating services could make more of an impact together than they could alone, so he began hosting large conferences to unite professionals in the industry. Throughout the year, iDate reaches out to the movers and shakers in the industry and gives them the chance to network, collaborate, and brainstorm among colleagues.

In addition to its informational panels, iDate also recognizes the best of the best with its iDate Awards. The nomination period runs from July 1 to Oct. 31 with the top five finalists announced in November. Categories include Most Innovative Company, Best Dating Coach, and Best Niche Dating Site. Last year, Marc added Best International Dating Agency to the list to recognize the reputable companies that facilitate cross-cultural relationships.

iDate has been held in Hong Kong, London, Beijing, and Los Angeles to broaden the horizons of professionals in the industry. In 2020, Florida’s Delray Beach will host iDate from Jan. 23 to 24.

“I like finding new and interesting topics and ways of attacking the business,” Marc said. “People these days want to know what they can do to compete because things are changing so fast.”

Marc has been networking in the dating industry for over 15 years, and in that time he has seen dramatic shifts in the business. Tinder blew the market wide open in 2012. During this time, many niche sites and apps jumped on the swiping bandwagon, seeing short-term success before burning out due to lack of consumer interest.

“We’re in a state of flux now,” Marc explained. He sees innovation as the only way forward for new online dating services. Copying what’s already been done won’t be enough to catch people’s attention. If they hope to thrive and gain a following, these businesses have to find the next big thing, and that’s the whole purpose and mission behind iDate Conferences.

Marc has long supported doers and dreamers in the dating industry. He gives a podium to professionals who can contribute to the growth of the dating industry, and he’s not afraid to look outside the industry to find software companies, payment processors, and venture capitalists who can offer a new perspective or valuable assistance to dating businesses.

A few years ago, Marc did all he could to promote Dating Factory when it was just getting started as a dating software company, and today the company has powered dating services that reach over 50 million members worldwide.

“I like to see healthy competition in industry,” Marc said. “We need that if we want to grow.”

Competition is becoming scarce as big dating companies eat up smaller services, but hundreds of independent companies continue fighting the good fight and using iDate Conferences as a platform to share ideas, promote their brands, and gain momentum in the dating scene.

“It’s really great to be part of the iDate 2017 Conference here in London,” said Adeem Younis, Founder and CEO of SingleMuslim.com. “Today my eyes have been opened in terms of how much more is still to come.”

Looking to the East as a Source of Innovation

Today’s singles are quite a puzzle. The average millennial spends over 10 hours a week on dating apps, yet many are in no hurry to get married. The marriage rate has dropped in the U.S., and researchers estimate that 25% of millennials will never tie the knot. Instead of seeking spouses online, these singles may want something more casual, or they may just want the confidence boost of receiving likes and winks from strangers.

Because not all singles are serious about meeting someone, the online dating scene is fraught with flaky chats and no-show dates, which can lead to frustration and disappointment.

High-level executives attend iDate to learn from the best in the business.

The political scene has further complicated the dating scene by adding more dealbreakers to the mix. In the wake of polarizing elections and chaotic policy making, many singles say they’re unwilling to cross party lines to find love.

Such pervasive attitudes and biases pose significant challenges to modern dating services, and it’s unclear how the industry will respond.

“We’ve got to get millennials to actually go out on dates,” Marc said. “Whoever cracks that will blow everyone out of the water.”

While some look to the U.S. to produce the latest tech and innovations, Marc and other industry leaders are looking to China, which accounts for 19% of the world’s web users.

“Beijing has become the Silicon Valley of China. They’re producing apps like crazy,” Marc said. “There are opportunities there — without question.”

In 2015, iDate in Beijing attracted the top dating sites in China, and many companies from other countries showed up to learn how to carve out a niche in a massive market.

Over the years, iDate has taken note of the seismic shifts in the dating scene, and Marc said China is in a strong position to lead future developments in online dating technology. Western companies can gain inspiration simply by researching the trendsetting apps going viral every day in China.

Online dating has given new life to an industry previously dominated by local matchmakers and dating personals. Many companies have seized the moment and developed match algorithms and chat tools to give singles a more curated, gratifying, and entertaining dating experience. Thanks to these innovations, the global dating industry is expected to continue growing, and market analysts say it could exceed $12 billion by 2020.

Whether he’s interviewing the CEOs of dating companies or organizing a panel of matchmakers, Marc aims to put the best minds in the room and generate new ideas and strategies. His goal is to help small businesses grow and inspire big businesses to innovate, so they can meet the needs of a fast-changing dating market.

Marc unites and inspires dating industry professionals at iDate with panels that address business concerns, unveil technological advances, and brainstorm new directions for up-and-coming dating sites, apps, and services. Anyone with big ideas and bigger ambitions can mix and mingle at the 51st iDate Conference in Delray Beach this January.