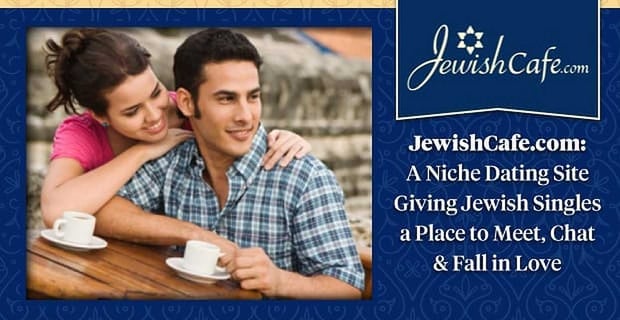 The Short Version: Launched in 2002, JewishCafe.com is a time-tested dating site for Jewish singles around the world. Over the years, thousands of marriage-minded men and women have used the site’s advanced search features and values-driven network to build lasting relationships with people from the same cultural background. JewishCafe.com uses the same basic setup as ChristianCafe.com, a niche dating network established in the late ’90s. Both sites have stood the test of time and been tremendously successful at bringing together online daters who prioritize cultural and religious compatibility. “My advice to singles,” said Sam Moorcroft, the Founder of JewishCafe.com, “is to go to the dating sites that have been around the longest because those sites knows what they’re doing.”

If you’re Jewish and want to meet someone who’s also Jewish, the question arises: How the heck do you do that? Is it really appropriate to flirt with people at your temple? Should you start approaching random people you see during the day?

But what if that cutie on the elliptical next to you isn’t single? Or isn’t Jewish? You can’t always tell by looking at someone if they’re going to be a good match for you, and it’s nerve-wracking (not to mention time-wasting) to go into a flirtatious conversation blind.

That’s why a growing number of Jewish singles have begun relying on niche dating sites to connect them to the right partners. It’s just a smart way to target your kind of people in the dating scene. You can feel confident that everyone you approach on JewishCafe.com is both single and Jewish (or willing to date a Jewish person). This carefully cultivated network is rich with possibilities for religious and cultural Jews.

Founder Sam Moorcroft said a significant number of JewishCafe.com members have chosen to pay for the upgraded features on the site because they’re ready for love and want to invest in tools that will help them find it.

JewishCafe.com caters to people who consider themselves Jews in a cultural, ethnic, or religious sense.

Sam launched JewishCafe.com in 2002 to replicate the success his first niche dating site — ChristianCafe.com — has had ever since it went live in the late ’90s. “The beauty of the internet is it allows you to segment by what’s really important to you,” he said. “We knew many singles in the Jewish community have a strong desire to meet like-minded people of faith, so we built a site around that.”

Today, JewishCafe.com has helped thousands of single men and women connect online and build long-lasting relationships based on cultural compatibility. Whether you’re a traditionally conservative Jew or a contemporary secular Jew, you can use the detail-oriented search tools on JewishCafe.com to find someone who understands your point of view.

“We always advise singles to try dating sites that have been around awhile and put some effort into it,” Sam said. “It’s the most important decision you’ll make in your life, so you can’t just sit back and wait for it to come to you — you wouldn’t look for a job that way, and you shouldn’t look for a date that way.”

JewishCafe.com has all the bells and whistles of a modern dating site. You can conduct a detailed search for date prospects by geographic distance, age, religion, and other important factors. You can message or send winks online to make a connection. You can browse through members in the QuickMatch section. The dating company has been in operation for decades and has honed several tried-and-true means to bring Jewish singles together. And they’re sticking to what works.

“We’ve been doing this for 16 years, so clearly our system works because otherwise we wouldn’t still be here,” Sam said. “Dating is dating, and the formula has not changed because people’s needs have not changed.”

After a quick signup process, JewishCafe.com members can fill in open-ended personality questions and add photos to their dating profiles.

One of the most successful and original features of JewishCafe.com is the free three-week trial period. All new members automatically have access to every feature available to paid members — including sending and receiving messages. For 21 days, free members can explore every aspect of the site without paying a cent.

Sam said it’s important to let newcomers see what JewishCafe.com is all about so that they know exactly what they’ll be getting if they decide to pay for a full membership.

JewishCafe.com is a privacy-conscious dating site, so members can choose a username rather than using their real names online. You are required to fill in drop-down answers about your age, height, religious views, reading habits, fashion sense, and other personality traits, but you do not have to post a photo or reveal your city of residence.

Something that has made JewishCafe.com stand out from the very beginning is the open-ended questions posed to new members during the registration process. New members can answer questions like “How do you think others see you?” and “What does being Jewish mean in your life” with as much or as little detail as they like. These questions are totally optional, but the dating profiles that are most successful are the ones that take the time to fill in thoughtful and genuine responses.

“These questions give members a holistic view of what the person is like beyond just a photo,” Sam said. “It’s not just yes-or-no questions, so you get more of a sense of people by how they talk about themselves — and that’s what it’s all about.”

In terms of its membership base, JewishCafe.com may not have much quantity, but it certainly has high quality. Sam said it’s a “tiny little site,” but it has remained profitable because of the loyalty and resolve of its members. A high percentage of JewishCafe.com members pay for monthly subscriptions because they believe the niche community provides a great opportunity to meet eligible Jewish singles.

“Our members are patient,” he told us. “They take their time and know what they’re looking for in a partner.”

A majority of JewishCafe.com members hail from either the US or Canada, but the dating network also has a presence in other English-speaking countries, including the UK, Australia, and, of course, Israel. Most members are over 35 and looking for a serious commitment.

“There are a lot of genuine, traditional Jewish singles who really just want to get married,” said Marc and Angela in a testimonial. The couple got married in Israel after meeting on JewishCafe.com.

Sam encourages relationship-minded singles to keep multiple pokers in the fire by signing up to more than one dating site at a time. It can’t hurt to diversify your options and give yourself every opportunity to succeed. After all, you get out of it what you put in.

“We want people who are serious about meeting people,” Sam said. “Those who get matched are the ones who put time and effort into it. Online dating isn’t a drive-thru where you can order up a date — you have to go make it happen.”

One of the most common questions Sam gets as a dating site owner is “Does online dating really work?” He can say with certainty that it does. He did his fair share of online dating in the ’90s, and one of his dates ended up introducing him to her friend, who turned out to be the woman of his dreams. They’re now married and have five kids.

JewishCafe.com has collected dozens of similar love stories over the past 15+ years. One Australian member moved to Israel to be with a man she met on the site. They got married and have nothing but good things to say about the Jewish community that made their relationship possible.

You can read JewishCafe.com’s testimonials to get an idea of the transformative value the dating tools can have in the lives of singles.

Winnipeg residents Melissa and Mike met on JewishCafe.com in 2004 and got married in 2007.

“[In] November 2005, Mike proposed to me, and I accepted without any doubt,” wrote Melissa, who sent JewishCafe.com photos of herself beaming next to her fiancé. “Good luck to everyone still looking. We found our soul mates, and so may you.”

“JewishCafe.com is a fitting name,” commented Yoffie, a single New Yorker. “I did not think of this as a dating site, simply a relaxed, no pressure setting to connect with other Jewish singles — like an independent coffee house.”

“We are a committed couple planning a future together,” said Chuck, who met his future wife when she sent him a wink on the dating site. “Without JewishCafe.com, we would not have had the opportunity to meet.”

“What touches me the most are the stories about people who would never have met if not for the site,” Sam said. “Sometimes I see pictures of couples who have had babies, and I know those babies wouldn’t exist if I hadn’t started a dating site 20 years ago.”

Arranging a date with a total stranger is extremely difficult in the real world. Especially if you’re only interested in dating a certain group of people. Fortunately, online dating has created a low-pressure shortcut to romantic connections for singles around the world. A niche dating site can help you cut to the chase and find exactly the sort of person you’re interested in dating without any muss or fuss.

Many Jewish singles find it easier to meet compatible dates by logging in to JewishCafe.com. The targeted dating environment is ideal for Orthodox, Reform, Conservative, Reconstructionist, and secular Jews in English-speaking countries around the world.

“If religion or ethnicity is important to you, give us a try,” Sam said. “In fact, try all the dating sites you can. I did, and I got a wife out of it. Online dating does work, and we’re living proof.”