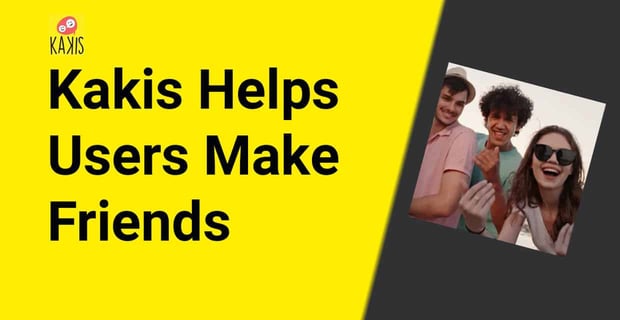 The Kakis App Is an Innovative Way to Make Friends

The Short Version: Around the world, adults want to make new friends, but they may not know where to start. Thanks to the Kakis app, starting new platonic connections just got easier. The Singapore-based app helps users find like-minded friends in their area to share activities and broaden their networks.

Making friends as an adult is hard work, and in the past few years, it’s gotten even harder. Countless sociologists, writers, and healthcare professionals warn that modern society may be entering a “loneliness epidemic,” characterized by smaller social circles, weak support systems, and increased time alone. There are many possible factors behind our increased collective loneliness, even outside of the global pandemic, from greater reliance on the internet to the rise of car culture.

Across the globe, people are struggling to make new friends and maintain old friendships. I experienced this when I moved to a new city after college, expecting friendships to just spontaneously occur the way they did in undergrad (they did not). I’ve had plenty of conversations with acquaintances who say that they, too, have a tough time making friends. Yet none of us take the cue and schedule time to see each other again. Maybe the vulnerability of extending an invitation is too embarrassing, or maybe everyone is out of practice when it comes to socializing. Either way, many of us need a better way to make friends. And that’s where the Kakis app comes in.

Melvin Tan got the idea to build a networking tool in 2013 when he was looking for a new job. He’d been scheduling lunches with old pals in an attempt to build contacts, and he realized lunch dates were a relaxing way to get to know new people. Simultaneously, his wife was struggling to make friends at work, especially during her lunch break when she didn’t want to eat alone.

Melvin saw a new way to solve both of their issues, and Kakis was born as a new app for making friends.

Kakis users can invite local people to hang out and grab lunch in a casual setting. “The chances are you will meet many like-minded people as many are working in the same verticals and usually offices and industries like to group together,” Melvin said. The Kakis app was originally called Lunch Kakis – kakis is a Singapoean slang word for a friend – but it soon grew beyond a simple lunch date.

“We have since dropped off Lunch as we do not want to be perspective restrictive to lunch only,” Melvin explained. “People can use the app to find dinner kakis, gym kakis, activity kakis.” Now, people use Kakis for any activity they want to do with a new friend.

Geolocation Data Helps Find Others in Your Area

When Melvin started Kakis, it was intended to be a way for people like his wife to find locals to share lunch with, potentially on a quick 30-minute or one-hour lunch break. Because of this, it was essential for the app to show other users in your immediate area, making it easier to meet up with someone quickly.

Users can look for potential friends who are near to their home or place of work and then meet somewhere close by and convenient for everyone. There’s no need to factor in a long commute to get to a restaurant or gym close to your new friend. Kakis has a simple structure that puts new friends within reach, making it easy for introverts, extroverts, and all types of people to connect online.

Melvin has even used the app’s geolocation technology to meet people abroad. While Melvin is from Singapore — where he first launched Kakis — he wanted to see if he could use it to make a new friend in an entirely different country.

“I was on a work trip in Shanghai in 2015, and out of curiosity, I used the app there, not expecting any results because I did not do any marketing in China,” Melvin told us. “I saw one user near me, and I was very excited. I sent her a request, we chatted, and we met the same evening, where she brought me to a trendy hangout. We are still friends now as she is back in Singapore, too.”

No matter where you are, you can use Kakis to search for friends in your immediate area.

Users Have Found Meaningful Connections on the App

People looking for romantic relationships have plenty of online dating app options to choose from to find a partner. But when it comes to making friends, facilitating apps are few and far between. This can be particularly frustrating for individuals in committed relationships, who often lack the resources to find truly platonic friends online and may feel uncomfortable trying to reach out to strangers IRL. I’ve certainly felt some anxiety befriending a guy at the gym and awkwardly thrown mentions of my partner into the conversation for peace of mind.

With Kakis, adults find a simple and straightforward way to meet new friends. Whether single, dating, or married, you can start friendly conversations and create platonic connections on the app.

“I hope the app can be used globally by people who want to make new friends and do not want to start off with a dating agenda,” Melvin said. “It’s a great tool for causally making friends.”

Sometimes those friendships lead to romantic relationships later on, but they do so in an organic way: slowly, gradually, and perhaps unexpectedly. Romance isn’t on the mind of everybody on Kakis.

“The majority of our users are in relationships or married,” Melvin said. “That being said, we have many singles in the app looking for friendships as they do not want to start off with a dating agenda.”

Some of those friends-to-lovers connections have even resulted in marriages. Melvin told us he’s heard of a few Kakis users who have gotten married to someone they met on the app. Kakis is not a dating app, of course, but such stories speak to the meaningful connections that can be made here.

While Kakis isn’t the most efficient platform for singles looking to jump into a relationship, it may be a good option for those who value building a friendship and mutual respect prior to love.

Broaden Your Social Circle on Kakis

The idea for Kakis was sparked in part by Melvin’s desire to broaden his network and foster opportunities for relationships that toe the line between friendship and business. “I would describe a typical user as a working adult who wants to make more new connections and increase his or her social circle,” Melvin told us. Most Kakis users are looking for friends, but it can also be a useful tool for those who want a wider network for all facets of life.

It’s a great option for people who have just moved to a new place, decided to get involved in a new activity, or simply want to meet new people. In addition to geolocation data, users can specify a variety of other advanced features to find new friends with the same interests.

“Users can filter by the age range, the job industry, gender, and general agenda for using the app,” Melvin said. “We have a smart search function which users can search by keyword specifically. If it is written on their bio, it will appear.” These filters can help users find others with the same goals so they can quickly gain a new buddy for whatever activity or experience they want to explore. Kakis is all about finding new friends in a low-effort, high-reward way.

“Kakis is made in Singapore with Love,” Melvin said. “We hope to spread this positivity globally, allowing people to broaden their social circles casually and easily with minimal effort.”