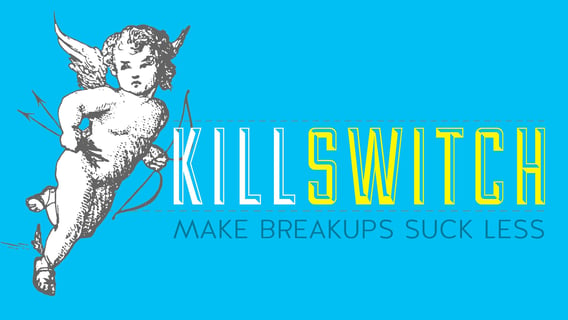 TL;DR: Downloaded in more than 180 countries and with donations going to the American Heart Association of New York, KillSwitch is the innovative app that’s healing millions of broken hearts.

Did you know 50 percent of women and 40 percent of men say they look at their ex’s Facebook profile too much?

If you’re one of them, we’ve got the app for you.

“Making breakups suck less,” KillSwitch lives by its motto to a T, quickly and privately removing wall posts, pictures, videos and status updates of you and your ex from your profile.

We spoke with co-founder Clara de Soto, of ClearHart Digital, to learn more about the creation of the app, the way it works and the effect it’s had on millions of people around the world.

Launching Valentine’s day 2013, KillSwitch is the brainchild of de Soto and co-founder Erica Mannherz, who played a big role in the creation of the app after a close friend experienced a traumatic breakup that had her deactivating her Facebook account.

As de Soto and Mannherz know, moving on after a breakup is an important part of life, but how can you be expected to move on when you are bombarded with all of these painful reminders all of the time?

With convenient and intuitive tools, KillSwitch allows users to manage their social media the they want to during a breakup, therefore jump-starting the healing process.

“The first way to get over someone is out of sight, out of mind, and unfortunately that just doesn’t exist in the digital space,” de Soto said. “Social media is meant to share. It’s not for storage, so unfortunately when you’re using it as a storage mechanism, it can be very harmful.”

So how does KillSwitch actually work? Glad you asked.

KillSwitch removes traces of your ex from your Facebook profile.

Search through the list or type in your ex’s name and you’ll see every video, photo, wall post and status update that you’re tagged in with your ex (suddenly those matching sweaters aren’t so cute anymore, right?)

Now you have a few options:

Then you have the option to save the deleted pictures into a hidden album on your Facebook profile (just in case!)

A “Congratulations” pops up on your screen, and now you can start moving on with your life. No longer will you have to see your ex’s likes and comments on your Facebook posts!

Striking a chord with people

Not only has KillSwitch received rave reviews in the past two years, but the app also was named among Entrepreneur’s 100 Brilliant Companies of 2013.

However, that’s not the most admirable part about KillSwitch. It’s the people behind the app and their desire to help others.

Making a contribution to the American Heart Association of New York, KillSwitch is about more than healing hearts that have been hurt by love.

“Having this little ray of sunshine to feel like your broken heart is helping other broken hearts is the least we could do,” de Soto said. “We really wanted to make it clear that this is a healing mechanism and not a vindictive tool. Moving on is a big part of growing up, and we didn’t want the app to get confused with something like sending poop in the mail. It’s a real thing.”

The KillSwitch team is currently working on a “breakup severity slide” that will help predict which Facebook materials the user wants to delete.

There’s also a new version is in the works that goes beyond the realm of breakups, but de Soto and Mannherz are keeping that under wraps for now.

Until then, KillSwitch is available for 99 cents via the Apple Store. For more information about KillSwitch, visit www.killswitchapp.com.