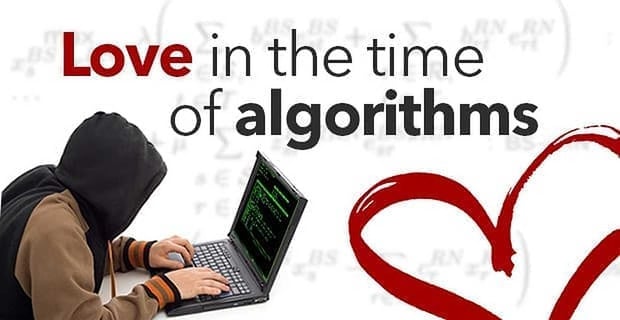 As mathematician G. H. Hardy once declared, “Beauty, not usefulness, is the true justification for mathematics.”

After years of being alone with few dating prospects and growing frustration, Chris McKinlay – a math graduate student – hacked an online dating site to try to find his true love.

He used clever extraction methods to collect millions of data points from one of the largest dating sites – OkCupid.  This data was drawn from different types of women’s profiles who viewed several fake profiles he created.

From this, he grouped them into seven clusters according to a technique invented by IBM researchers. Then he adapted his profile to get the most responses.

He described the details of his method in a book but gained notoriety when this story was told in the tech magazine Wired.com.

While the story grabbed a lot of attention, surprisingly more than 90 percent of the responses were negative and readers were not enamored by his approach.

Compare that with the analytical approach used by Amy Webb.

The then 30-year-old had just come off a bad breakup and knew her time was running out to find a perfect man, get married and start a family.

She didn’t have many more years to use, so she needed to come up with a better approach to dating.

Then, like McKinlay, she collected data from dating sites and used that to improve her profile.

Firstly, although she wanted to meet a smart man, the smarter men tended to write a lot, but she noticed the more popular profiles were short. She needed to get the total number of words down to 97.

Also, she needed to avoid being very specific (for example, mentioning her favorite movie).

Almost instantly she went from being relatively unpopular and ignored to the most popular on the whole site and was receiving tons of requests for dates.

The problem became how to select the right one.

After several disastrous dates, she came up with a point system by traits.

For example, 100 points were assigned to the top trait, and then all the points from the traits would be summed up with different weightings.

She would then look for the men with the most points, but they had to meet the required minimum of 700 points.

With this method, no man had met the minimum, but she deciced to go out with a guy with a very high score. After the date, she revised his score to 1,050!

A year later, they were married and started a family.

She has also written a book on her story and has given a Ted talk. Unlike the case of the mathematician, more than 70 percent of responses were positive. Some were even extremely positive and supportive.

As an example, Luisa wrote:

“Never laughed so much in a TED talk. I like to see an example where being picky works! Congratulations.”

So why the difference in response between Amy and Chris’ stories?

For the answer to that question, check out part two of my article next week.

How to Find Love Online This Holiday Season

Should You Reconnect with an Ex Online for the Holidays?

4 Ways to Stalk Your Online Date Without Getting Caught