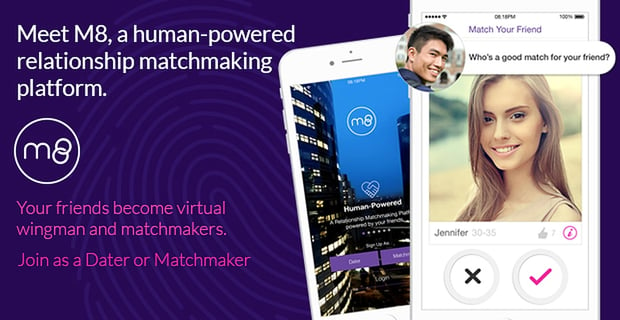 On M8, Users Can Play Matchmaker or Get Set Up by Their Friends

The Short Version: If you’re single and have friends, at some point one of them is going to try to set you up with another single person who they think would be a good match for you. That type of matchmaking often works because friends know who you are and can have a good sense of what you like. M8 is a mobile app that recreates that personal matchmaking experience. Members can join for free as either daters or matchmakers. If you’re a dater, once you find your partner, you can switch over to the matchmaker side to pay it forward and help other members find compatible partners.

The story of the M8 dating app began at an Oscars viewing party for charity. Stephen Liu, who frequently hosted charity events and had a social calendar so full he barely had time to date, was looking sharp. Linda Kim, a creative director with a marketing agency, had just earned a promotion and was feeling wonderful. Neither was there looking for love, but both of them were single.

That’s when Stephen’s friend Teddy Zee — who, coincidentally, produced the movie “Hitch” starring Will Smith as a professional matchmaker — stepped in. While he was mingling at the party, he met Linda and thought she and Stephen would be perfect for each other. So, he introduced them and took a step back as Stephen and Linda delighted each other with laughter over apple martinis for much of the rest of the night.

A few years later, Stephen and Linda were married and ready to help others in the same way their friend Teddy had helped them.

“When Teddy vouched for me to Linda, even though I wasn’t quite her type, she decided to keep an open mind,” he said. “And that made all the difference in the world. Of course, the rest is history.”

Inspired by the origins of their meeting, the couple launched M8, which welcomes singles as well as members who are in relationships but love to play the role of matchmaker.

The innovative mobile app allows users to find romance based on recommendations and encouragement from those they know and trust.

Stephen and Linda realized the special way they had been introduced — a social, yet personal, matchmaking by someone who knew them — could benefit others as well as well.

“This is the way the world works. It’s all about who you know, trust, recommend and introduce. We do it for business, but why not love?” Stephen said. “We all have people we care about in our lives who are single, and, if you care about them, you want them to be happy. So one of best things you can do for them is to help them find their mate — so they can live their happily ever after.”

Stephen and his wife Linda were introduced at a party, helping spark the idea for M8.

So the couple combined Stephen’s ability to start and scale business ventures with Linda’s skills in UI designer, motion graphics, and branding. The result was a mobile app called M8.

The concept is to connect others in love the same way we would connect them in business networking situations — through recommendations and referrals. The platform is designed with privacy, safety, and trust at its core.

On M8, singles are more likely to find others who share their values and culture, rather than encounter the hook-up mentality pervasive on other dating apps.

Another differentiator between M8 and other dating apps is that M8 encourages users who are in happy, committed relationships to join. The idea is that people in relationships — even those who are happily married with kids — have single friends who they love and want to see happy.

“Our view is that everyone has someone in their life who they care about who is single,” Stephen said. “We want to build the world’s largest matchmaking social network.”

The app targets users who are in their late 20s and early 30s who are tired of swipe-left, swipe-right dating. Most professional, independent adults who want to find people who can make them laugh and connect on a deeper level have already begun to branch out to more substantial dating platforms. M8 can make that transition more natural — and, perhaps, more effective.

A talented team of developers has been working on M8’s private Beta long enough to discover how much users value — and trust — the platform and its users.

There are two main types of M8 members: daters and matchmakers. A matchmaker can join for free and earn bragging rights for the successful connections they set up. But they can also earn points for making matches and redeem those points for gifts.

Daters, meanwhile, can earn points for M8 matches and benefit from free connections by Matchmakers.

If daters want to upgrade their experience, they can sign up for a premium membership. At the premium level, daters can be connected to potential partners through M8-generated matches as well as through their Matchmaker connections.

The M8 app offers plenty of benefits for daters, but you don’t have to be single to join in the fun.

The app even gives you a reason to stay once you’ve found someone amazing. Users can quickly take themselves off the market by transferring their membership from dater to matchmaker. Then, they can pay it forward and help others find love.

“Dating apps almost have a perverse incentive to be unsuccessful in creating relationships. Since M8 has something for people who are single or in a relationship, we want to keep a user for a very long period,” Stephen said. “So, when a dater gets into a relationship on M8, he or she can simply turn off their dating profile and play matchmaker.”

That way, you can stay a part of the digital community and still invest your energy in the person you love.

Stephen, Linda, and the M8 team are still working to expand the mobile app’s membership, but they’re also working on improvements to make it even more valuable.

Soon, both daters and matchmakers will earn M8 cryptocurrency coins instead of points when they’ve successfully connected others. This incentive offers an added benefit beyond gifts and bragging rights — which are still pretty great.

The team is also working on a Concierge Dater Membership service that will act as a traditional matchmaker through the M8 platform. This service will include different avenues for singles to find meaningful, fulfilling relationships that have value both online and off.

These new features align with M8’s original mission: to connect people with a little help from those who often know them best — their friends.

“I’m all about connecting people whether that be for love, business, or friendship. It makes our social networks denser and our communities closer — which I believe is a good thing for society in general,” Stephen said. “I’m very proud that I have been personally responsible for hundreds of marriages, jobs, business deals, and friendships.”