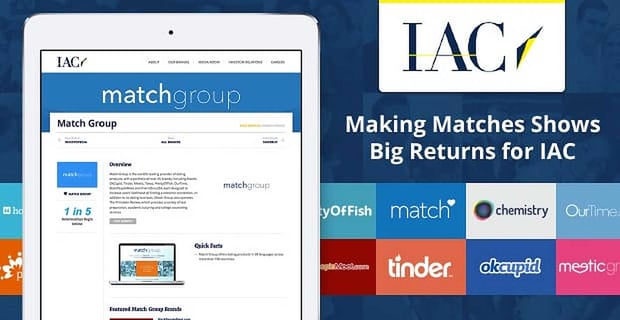 The Short Version: Since 1995, IAC has been a leader in the world of e-commerce. Their 150+ websites, including big names like About.com and  Dictionary.com, attract more than 2.5 billion visitors each month. IAC’s Match Group is a top revenue-generating vertical in their portfolio, expanding profits by 21% through Q2 of 2016. Widely popular sites like OkCupid lead the charge in driving earnings, and more focused sites within the People Media family keep IAC’s Match Group relevant across demographics. The 45 brands that make up the Match Group connect people and help maintain IAC’s status as a dominant online conglomerate.

Recently, a friend of mine decided to get back into online dating after taking a six-month hiatus, and she was trying to figure out which site she should choose. She had narrowed it down between Match.com and Tinder, and I told her no matter one she chooses, she’ll be in good hands.

It seems another winner in this scenario is IAC’s Match Group, a super-sized portfolio of online dating destinations that have proven to be some of the most successful across the web, especially the two I mentioned above.

No one profits from the dating population quite like IAC. With one in every five relationships starting online, IAC is performing above average quarter-over-quarter.  Who knew love could be so financially rewarding?

A Compendium of Dating Sites Backed by an e-Commerce Trailblazer

IAC’s Match Group is a key part of their success, boasting an impressive 45 brands. The beauty of the Match Group’s portfolio is the diversity of how the sites pair singles. This collection of dating companies is getting people together all over the world in 38 different languages.

Match is the brand standard, sort of like the Kleenex of the online dating world. They’re the world’s largest online dating service and continue to perform well at their higher price-point for matching people for romantic relationships.

Tinder is leading the growth initiative in the Match Group with the roll-out of a subscription feature and general infamy among users. Other notables from the brand include OkCupid and the recently acquired PlentyofFish. All with different services, demographics, and price-points, this impressive array of websites is raising heart rates and revenue.

IAC’s Match Group is a key part of their success, boasting an impressive 45 brands.

Some sites target specific ethnic communities such as LatinoPeopleMeet. And whether you’re liberal or conservative, the Match Group has you covered. Look no further than DemocraticPeopleMeet or RepublicanPeopleMeet to find your socially-minded counterpart.

It doesn’t end there; everything from the marriage-minded to pet lovers have a place to find their next true love. IAC does not miss a demographic or relationship type, and that results in mega-money for their investors.

IAC knows how to make e-commerce work for them in general. The Match Group is one part, albeit a big part, of this juggernaut. Maybe you have heard of HomeAdvisor, Vimeo, The Daily Beast, or Daily Burn? Those are some of their noticeable brands that have captured more than just the dating-minded consumers. HomeAdvisor is the leader of the online pack with continuous growth quarter-over-quarter. They have a host of how-to sites like About.com and Ask, and digital entertainment sites like CollegeHumor.com, Dorkly.com, and Big Breakfast.

In Q4 of 2015, IAC’s Match Group acquired the previously-mentioned PlentyofFish, a popular and free/lower-price-point app. Non-dating revenue, specifically The Princeton Review, stayed flat at $26 million due to low performance in an SAT prep product that didn’t quite catch. Who knew all of that romance and lust would make Princeton dull in comparison?

In Q1 of 2016, total revenue grew 21% due to rises in dating revenue, which were largely helped by extraordinary growth at Tinder. Paid Member Count (PMC) increased to 1 million at Tinder and 5.3 million globally across all brands in the Match Group. In Q2 of 2016, IAC just reported another 21% of growth in their dating revenue, which is helping the company minimizes losses in their Publishing and Applications sectors. And the leather jacket-clad bad boy of the Match Group bunch, Tinder, is the one leading this consistent and over-performing growth.

Tinder, an app largely known for its hookup prowess, is at the front of the Match Group’s expansion, with steady increases of users in general and conversions of free users to paid users for the Tinder Plus product. I can’t say how many times I have accidentally swiped left and rued the fates for my expedience. With Tinder Plus, you can “Rewind” and correct your swipe dyslexia.

Connecting couples is profitable, as the Match Group grew revenue by 21% through Q2 2016.

Other features include the Passport feature, which allows users to change locations to meet people while they’re vacationing or on the road. With Plus, users also get unlimited swipes and an increased number of Super Likes. This is a big reason why 1 million people had Tinder subscriptions by the end of Q1, and they project 1.6 million paid users by the end of the year.

Plans for PlentyofFish are also in the works to move over to paid subscription options. PlentyofFish brought with them 3 million daily actives and plenty of cross-marketing opportunities with their addition to the portfolio — which only adds to IAC’s impressive user numbers. IAC reports 370 unique monthly users, with more than 2.5 billion site visits per month.

Those are the kind of numbers that would impress any potential advertiser to open his or her wallet wide, answering the question, “How do free sites make money?” User numbers like that just ooze profit.

The Future is Bright for Singles and IAC Brands

As more quarters come and go, IAC is sure to continue outperforming themselves, and with the average single person going on 41 dates per year, the Match Group is sure to stay profitable for a long time to come.

Match Group has cornered the market on strong dating applications, and IAC investors see results upfront, just like the singles who use their sites and apps.

As it turns out, my friend decided she was on the prowl for a relationship and went with Match instead of Tinder. While some of the guys she meets online may not be an investment that pays off, IAC definitely is.