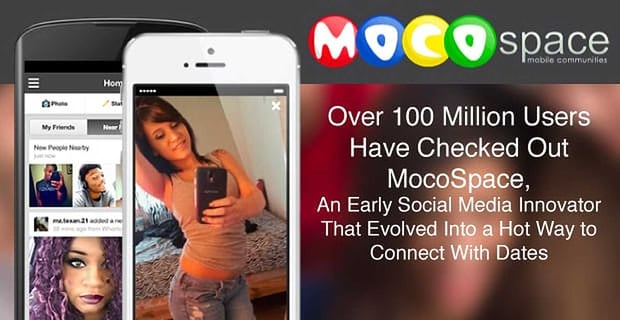 Over 100 Million Users Have Checked Out MocoSpace, An Early Social Media Innovator That Evolved Into a Hot Way to Connect With Dates

The Short Version: Before Facebook — or even MySpace — existed, the idea of making connections through social media or online gaming was far-fetched. But MocoSpace was one of the first to make the innovation of finding friends — and even dates — through mobile and online gaming a reality. Today, MocoSpace remains a popular place to have fun playing games like “Street Wars” while flirting and connecting with fellow players. In fact, so many connections are made through MocoSpace that its employees often get invited to users’ weddings.

The dating landscape was completely different 20 years ago. Not only did Facebook not exist, but the world was also still years away from being introduced to Tom from MySpace.

The best ways to meet someone were hitting the bars or, if you had the money, hiring a matchmaker. You could also rely on the original matchmaker: your well-meaning mom. She met a woman whose kid is your age, and she thinks this could be the one.

MocoSpace has been on the leading edge of social gaming since 2005.

But then things began to shift. Around 2001, companies started building online games. These games were ideal for more than just passing the time by yourself; they could help you connect with others — even offline.

In 2005, MocoSpace was one of the first companies to create a line of simple, popular, web-based games, and the company took off in the US when it added a social component. A short time later, MocoSpace was making some of the most popular gaming software for mobile phones. People found MocoSpace to be the perfect platform to meet someone special — even on a flip phone.

“Our thought was not that we were launching a dating site, but a site that was a community to find friends with common interests in gaming,” said Justin Siegel, the Co-Founder and CEO of JNJ Mobile, MocoSpace’s parent company. “Dating and flirting have always been a big part of it. For some users, gaming is not why they come.”

Mocospace built on insights from Justin’s previous company, JSmart, which was one of the first in the United States to create games for mobile phones. Crossword puzzles, word searches, hangman, blackjack, poker, and roulette on flip phones paved the way for today’s smartphone entertainment.

“The games did well, and we started to build in social features, years before iPhone, Android or Facebook. What we found was that a lot of users spent as much — or more — time in the social features than in the game itself,” Justin said.

So, in 2005, the company started to create one of the first mobile social networks available in the US It took time to grow, but it did.

“The actual social network formula was novel, but putting it on the phone was novel, squared. It worked out really well,” Justin said. “There wasn’t an easy way to create awareness and build distribution. We built it, and people started trickling in, and then, with word of mouth, the trickle exploded into something much bigger.”

At its peak, more than 1 million users were logging in to the gaming site each day, and more than 100 million users checked it out. Today, MocoSpace has moved beyond gaming and includes group chat, private chat, and photos so you can get to know other users.

Most app users are from America, with the rest hailing from the United Kingdom, India, and Australia. The players range in age between late-20s to early-30s, and the platform has a multicultural vibe.

Users can easily connect with each other through MocoSpace chat or any of its games.

“We look very much like the United States does, with a mix of Hispanic, African-American, and Caucasian users. The user base is definitely working-class,” Justin said.

That’s just part of what makes MocoSpace such a great place to meet like-minded people. The app is free to download and the games are free to play. Those factors contribute to the app’s 4-plus star rating on the iOS App Store.

“The feedback we hear is all dating-related, people met their best friend or their future husband or wife on the site, now they’re married with kids,” Justin said. “They’ll invite members of the MocoSpace staff to their weddings. We get those invites pretty consistently.”

Go VIP & Get Noticed in the Site’s Most Popular Game, “Street Wars”

The most popular game on MocoSpace is called “Street Wars,” a social game that you can play as an individual or on a team known as a crew. Justin described it as a resource management game with a mob theme.

Crew members work together to gain power and battle other crews. You can buy weapons, create defense mechanisms, and use different strategies to get ahead.

“You level yourself up, building offense and defense. The game itself is social, so there are forums, blogs, chat rooms, and messaging groups that are supported by the community playing the game,” Justin said. “But we also have instant messaging, chatting, and photo sharing as core features of the site.”

To increase visibility, you can join as a VIP member and get a discount on MocoGold — the online currency used in Street Wars to buy power-ups in the game. VIPs also get an ad-free experience. Of course, you don’t have to be a VIP to play the game and buy single items — but if you want to add some impressive stats to your resumé and attract the best crew members, VIP is the way to go.

MocoSpace is planning to roll out a new feature for Street Wars called Territory Wars. The feature consists of a visual map where the crews battle and compete for control of virtual territory within the game. Beta testers are loving it, Justin said.

But features within the game aren’t the only thing users love about the social gaming app. MocoSpace staff members have heard lots of positive feedback over the years.

“Even though we’re sitting at desks, we’re doing things that have a huge impact on people’s lives and give them entertainment, enjoyment, and connections,” Justin said. “From very early on, we heard success stories from users who, for different reasons — be it socio-economic or health — were able to stay in touch with the outside world because of us. Maybe they had been in the hospital for months, and, thanks to us, they made new friends, stayed in touch with old friends, and were totally entertained. It’s a big part of what makes it worthwhile and exciting.”

MocoSpace looks to build on its roots as an original social media innovator by connecting more users in the future, whether it be for a game, a chat, or a date.