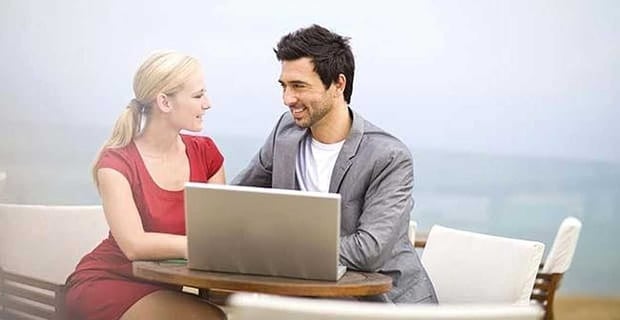 As a dating coach, and one who has spent two decades helping singles find love online, a day doesn’t go by that I don’t hear a heartwarming story of someone who found the love of their life through digital dating (or at least had a date they enjoyed).

Here are a few stories to give you hope that you, too, can find someone special to ride into the digital sunset with.

Steve was one of the first men Diane noticed that she was matched with on eHarmony, and she was instantly attracted to him. Steve’s wife had passed away, and Diane was a divorcee.

Since she is a writer, she appreciated the way he wrote and was impressed with his perfect spelling and grammar. They bi-passed the guided communication and went directly to emailing each other.

Steve mentioned he’d be traveling for a few weeks out of the country for business and they needed to delay getting together for their first date.

Then it went silent. She didn’t hear from him for a month, and she figured he found someone else he was interested in.

But what actually happened was her last email to him somehow timed out or went astray, so he thought she was the one who stopped communicating. She assumed he hated what she had written, so he had backed off.

Fortunately Steve took a leap of faith and contacted Diane again when he returned, and she was elated.

The two met for the first time over coffee shortly after that and more than hit it off. They began seeing each other all the time, going out to concerts, watching movies and cooking beautiful meals together.

They shared their life stories, triumphs and heartbreaks and began to blend their two worlds together.

The following spring, they flew to Paris for a holiday, and while securing their love lock to a Paris bridge alongside thousands of others, Steve pulled a diamond ring from his pocket, dropped to one knee and asked me Diane to marry him.

Somewhat shocked and more than a little embarrassed by the public display, she urged him to get up and awkwardly mumbled “Ya sure?” in answer to the question.

“Ya sure” has since become a loaded phrase for the two of them.

Takeaway: Reach out and reconnect. Sometimes emails get lost in cyberspace

“Some of the best dating stories

result from singles following their hearts.”

Elizabeth and Michael met on PlentyOfFish. After a few weeks of communicating, they exchanged phone numbers and met at a wine bar for their first date.

Elizabeth ordered a white and Michael ordered a red, and they split a plate of various cheeses and cold cuts.

The conversation was going so well that they skipped the weekly trivia game the bar hosts. Their first date ended up with a kiss and a second date on the calendar for two days later.

Date number two was fantastic. The two decided to go ice skating, something Michael hadn’t done since he was 11 years old.

They went in circles around the rink with Michael gripping the rail in one hand and hers in the other. Perhaps he was being sneaky, but he was there to pick Elizabeth up when she fell a few times.

Afterward, they went for hot cocoa and a walk. Then they went to the airport to look for stars, but clouds got in the way. They didn’t think they’d even notice the stars if they were visible.

According to Michael, the date was meant to live out some of the things the two had been talking about while they were texting each other.

They spent the rest of the night together, became Facebook official and are planning their future and more fun dates to add to their memory book.

Takeaway: Bring out your inner child and make your dates light and fun. Keep flirting through texts about new things you’d like to do together on future dates.

Todd and Rozie were both members of JDate, where they were looking for love online. The two of them were frustrated with the search process and were about to let their memberships expire.

Rozie decided to give the online dating game one last shot when she sent Todd an email that simply said, “You look cute. I like your profile.”

Rozie didn’t even have a profile photo posted and most of the details in her profile were left blank, so Todd was hesitant to reply. He figured he’d say hello and ask her to send him a picture.

He was glad he did so, as when he received Rozie’s photo, he thought she was really cute.

After about one month of email exchanges and a few phone calls, they finally met in person. Their first date was scheduled for drinks after work, but the conversation led to dinner. Dinner turned into afterglow drinks, and their first casual drink date lasted for seven hours!

The two went home separately at 2 a.m., only because they needed to get to work the next day.

After seven months of dating, Todd proposed marriage to Rozie in a romantic way at the tallest tower in Krakow, Poland. It was the largest square in Europe.

They married a year and a half later and now have two children.

Takeaway: Women need to be proactive with their search and contact men.

At the end of the digital day

Some of the best online dating stories resulted from singles who didn’t wait to be approached, gave another shot when an email wasn’t returned, were spontaneous about dating ideas and followed their hearts instead of just their heads.

It’s just a reminder that sometimes an email gets lost in cyberspace and sometimes a perfect date idea isn’t perfect – unless you’re with someone who could be perfect for you.

In that case, just being together and creating new memories is what the courting process is really all about.