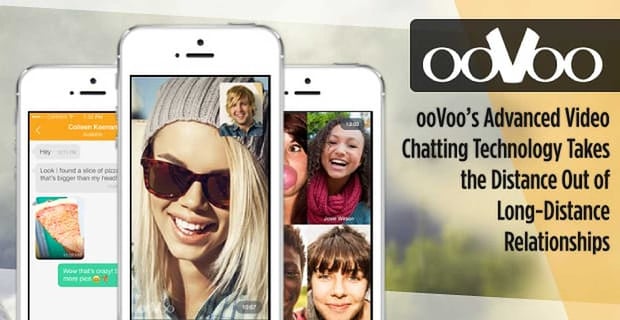 The Short Version: Long-distance relationships can often be difficult, but video chatting through ooVoo helps couples feel closer, even if they’re an ocean apart. 65% of ooVoo’s more than 160 million registered users are under the age of 25, a period of life when many couples are separated by career and educational opportunities. With features that allow couples to watch videos together, relive conversations, and use live 3D avatars during calls, ooVoo ensures members have fun while connecting with up to 11 loved ones at a time. Promising to maximize the video chatting experience, ooVoo uses Superclear™ technology to deliver the highest quality picture and sound for users of the popular app.

After more than a year of going through the challenges of a long-distance relationship, I can vouch for the benefits of a good video chatting app. Sending text messages is fine when you don’t have time for much else, and phone calls are good when you need to quickly communicate a complicated idea. But nothing beats being able to actually see your partner’s face and hear his or her voice, and that’s the quality experience ooVoo provides.

“There are so many subtle nuances in communication that happen only when you can see someone’s body language,” said Chris Wire, Chief Design Officer and Head of Product for Krush Technologies (ooVoo’s parent company). “I think our product helps deliver on that promise of true face-to-face communication no matter where you are in the world.”

Long-distance couples often use any form of communication short of carrier pigeons to stay connected. But using ooVoo, and their innovative features such as Watch Together and Superclear™ technology, really simulates the date experience. Nothing can replace being in the same room as the one you love, but ooVoo is making great strides in helping you temporarily forget that you’re not.

Millennial Appeal: 65% of Users Are Under 25

When Chris tells many of his friends that he works on the video chatting app, many of them tell him they haven’t heard of it.

The world’s largest, independent video chat and messaging app logs 1 billion video call minutes per month and boasts more than 160 million members, and that number is growing by nearly a 100,000 per day. So this is no small operation. Of those 160 million users in 130 countries, 65% are under age 25.

65% of ooVoo’s registered users are under the age of 25, and ooVoo has reached 130 countries.

As many as 75% of students participate in long-distance romantic relationships during their college years, so it makes perfect sense the number would be that high. College is a period of transition that can cause separation from significant others.

Maybe you’re a year older than your boyfriend and starting college at an out-of-state school while he’s still living with Mom and Dad. Maybe your college girlfriend is a couple of years ahead of you and is accepted into a prestigious law school in another state. Maybe you graduate together and you both receive internship offers that will take you to opposite sides of the country. It’s a scenario that plays out on a regular basis.

Long-distance relationships may be a challenge, but they aren’t necessarily doomed to fail. Daily communication is key, and using ooVoo can really help you connect on a deeper level.

ooVooo embraces their audience by making video chatting with fun features that appeal to younger men and women. Millennials may dominate the member base, but ooVoo is for anybody who wants a high-quality video chat experience.

Whether users are long-distance couples keeping love alive or transnational companies that need to connect to do business, ooVoo has a handful of standout features that make it happen.

Developed alongside Intel, ooVoo’s Superclear™ technology aims to correct some of the negative effects of network loss and provide HD-quality video and audio clarity with minimal issues on both desktops and mobile devices.

Superclear™ technology from ooVoo adds another level of video quality and audio clarity to your video chats.

“When you see a degraded video stream, a lot of what you see are issues with the network that don’t really have anything to do with video compression,” Chris said. “What Superclear™ technology does is look for those losses and negotiate packet loss much better than anyone else out there.”

2. 3D Avatars — Show Off Your Personality

One of the latest ooVoo features is the ability to use 3D avatars that mimic facial movement during live calls.

Have you ever wanted to have a conversation with your significant other that doubled as a presidential debate where you got to play the role of Hillary Clinton and he was Donald Trump? Of course, you have, and now you can. And when he furrows his brow in consternation, so will The Donald on your screen. Just know that this combination of characters could drive you to start yelling at each other.

“We’ve had a lot of success, primarily because of the age of the audience, with our avatars,” Chris said.

3. Watch Together — A Close-to-the-Couch Experience

A major part of modern dating is sitting on the couch next to your significant other and watching movies or TV together. When he or she is a thousand miles away, that idea would seem impossible. With ooVoo’s Watch Together feature, replace the couch with a window on a screen and you come pretty close to the experience.

Watch Together allows up to 11 people to watch the same YouTube video simultaneously, so now you won’t have to miss out on your significant other’s commentary about how that guy in the video was in that other thing you watched. You know the one, right?

With ooVoo’s Play It Again feature, you can record conversations with your loved one and enjoy them again at a later time.

We all lead busy lives and your free time isn’t always going to match up with when your significant other is available. So when you’re really missing someone, you can use Play It Again to get as nostalgic as you want to be.

While the ability to have high-quality group video chats is an excellent feature, its application in a dating context is limited. It is, however, a great way to conduct a business meeting or talk to up to 11 friends or family members at once.

While most of ooVoo’s video calls are between two people, you also have the ability to send text messages and have group chats with up to 11 other people simultaneously.

“We pride ourselves in the multiparty experience,” Chris said. “I think from a quality standpoint when you bring groups of people together, I think that’s when ooVoo really shines.”

ooVoo was founded in 2006 and launched in 2007. Run by parent company Krush Technologies, also known for apps like Flinch and Heystax, ooVoo’s goal is to narrow the gap between humans and technology.

“Our app (ooVoo) is about bringing you closer together via technology with the people in your life you really care about,” Chris said.

He even uses the app to stay connected to his wife when he travels.

“I’m married, but I travel an awful lot for business and I think that it’s a great way for my wife to stay in contact and see and feel each other much more than just picking up a phone,” he said.

Even with technological advances seemingly shrinking the world, limits on communication will continue to present hurdles for people in long-distance relationships. A video chatting app alone, even one that is as advanced as ooVoo, can’t keep a relationship going, but it’s certainly helping.

Time spent with loved ones chatting on ooVoo is true quality time, enhanced by rich video and audio quality and bolstered by superior features.

Staying together as a couple requires commitment and patience. The effort you put into a relationship can now go much further by making it easier to stay connected.

“I think it can’t replace actually being together, but it’s about as close as you can get,” Chris said. “ooVoo is the best app out there to bring people together and I’d encourage people to download it and give it a try.”